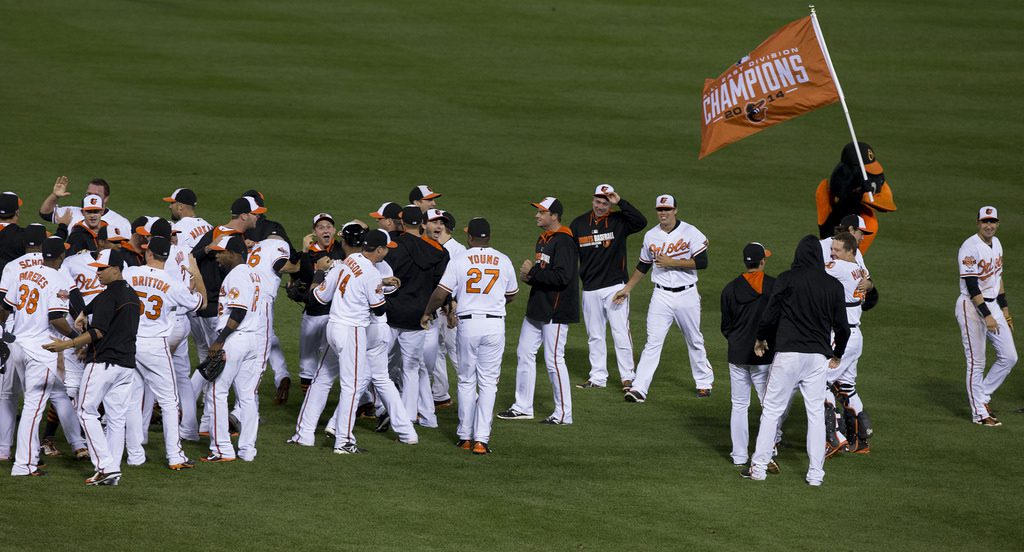 With hitting down at an epic rate and pitching being the primary talking point during the MLB postseason, how refreshing has it been to watch the Baltimore Orioles offense in action? For Detroit Tigers fans, it hasn’t been refreshing at all, but it has been for the rest of us.

After a 12-run outburst in Game 1, Baltimore backed that effort up with seven runs in Game 2. This display should be partially credited to Detroit’s poor bullpen, as both games showcased hectic eighth innings created by the Tigers. Regardless, Baltimore has been a dominant offensive team all year. Their starting pitchers have been silently effective and their bullpen is lights out, but make no mistake, offense fuels this team.

Nick Markakis is one of the premier leadoff hitters in baseball. He hits for power, reaches base, and rarely strikes out. The free-swinging Adam Jones, who probably despises walks more than losing, has developed into one of the best overall center fielders in the game. His ambush mode makes him a dangerous and feared hitter. Baltimore’s depth continues with Nelson Cruz and his 40 dingers this season. Steve Pearce is contributing at a high level, J.J. Hardy gives quality at-bats, and Delmon Young is always available to pinch hit off the bench.

From stars to reinvention stories, free swingers to walk drawers, the Orioles offense is dynamic. This is remarkable when considering the losses of Manny Machado, Chris Davis, and Matt Wieters. Manager Buck Showalter deserves a heavy portion of the praise for having this team play well despite crushing injuries.

Baltimore’s offensive success obviously gives them a chance to win, but their plate potency also benefits baseball in the big picture. Games nowadays are longer than ever and a significant portion of young fans are abandoning the sport. Shifts, advanced metrics, and detailed scouting reports have turned hitting into a nearly impossible task. The result has been run scoring and batting averages dropping down throughout the game. With so many teams having anemic attacks at the plate, the Orioles have been a welcomed story. Baseball needs offense. In turn, baseball needs the Orioles.

Pitching duels and showdowns between aces have their place. They always will. But what’s better than a casual fan turning on a game and seeing a 9-8 score in the sixth inning, or an 11-9 slugfest in the eighth? Excitement from offenses can turn casual fans into regular viewers. Even the die-hard fans, who can be seen draped in orange at the raucous Camden Yards, would probably rather see Cruz and Jones belt three-run homers than Chris Tillman toss a shutout.

The biggest concern for Baltimore is whether or not they can maintain this attack. Pitching usually wins out in the playoffs, that’s why it’s the primary talking point. The biggest secret Baltimore has over the sports world is that their pitching is quietly quite good. Super quietly, yes, for no big names are present. But Tillman, Bud Norris, and others have been effective as starters, while Darren O’Day and Zach Britton have been superb as relievers.

With the common theme of pitching working for Baltimore, they satisfy the baseball gods who believe that strong hurlers will defeat quality hitters in most situations. But with the recurring prevalence of breakout innings at the plate and determined at-bats throughout the lineup, the Orioles also satisfy the casual fans who are on the brink of turning off their televisions. With a team like the Orioles, those fans might leave those televisions on.

Whether it’s scoreless in the seventh or mayhem in the third, I’ll be watching Game 3 of this series either way. That mayhem though, the type that prevailed for Baltimore in the first two contests against Detroit, that might just be enough to make fans on the bubble watch too. For baseball, the more fans in the seats and eyes on the flat screens, the better off the game is as a whole.