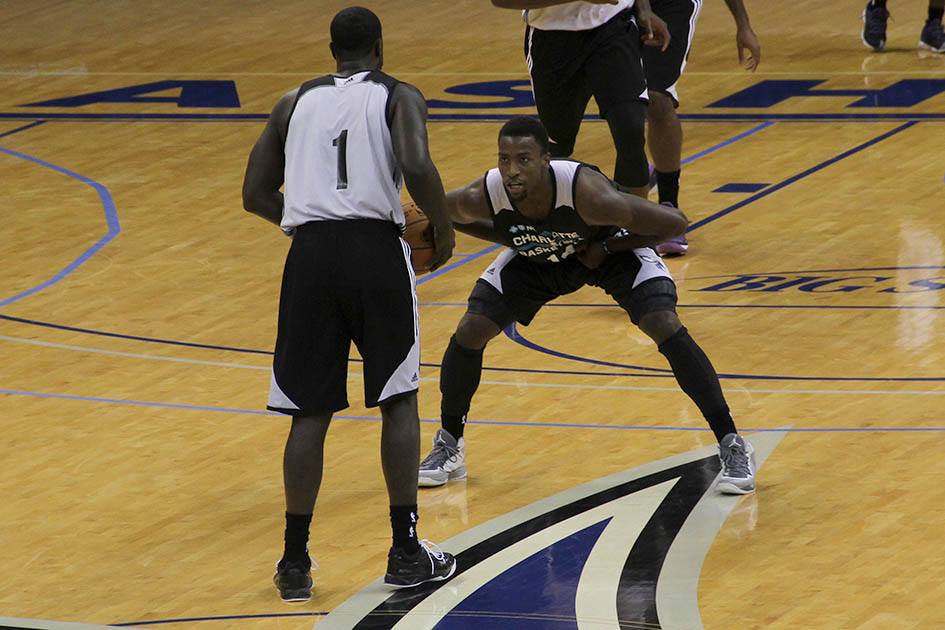 Image courtesy of the Charlotte Hornets/Facebook.

After plenty of rumblings last year, the Charlotte Hornets made a loud statement this offseason with the acquisition of Lance Stephenson. The former Indiana Pacers guard is boisterous and outspoken (sometimes many times to a fault), and his signing served as an announcement that the Hornets should be on everyone’s radar in the Eastern Conference.

But while pressure befalls Charlotte’s bigger targets, a key player is flying a little lower. Since being selected No. 2 overall in the 2012 draft, Michael Kidd-Gilchrist has faded into relative obscurity.

His Kentucky class-mate, Anthony Davis, has shot up to become one of the can’t-miss talents in the league. Other 2012 draftees like Damian Lillard, Andre Drummond and Bradley Beal have all had varying impacts, and established themselves as franchise cornerstones in just two seasons. But Kidd-Gilchrist’s development has been much more gradual and, like him, understated.

He didn’t lead Charlotte to the playoffs (Al Jefferson and, to a lesser extent, Kemba Walker did that), he doesn’t have well-known career highlights, and his game doesn’t immediately jump out as dominate or imposing. Nonetheless, Kidd-Gilchrist plays an important role on the Hornets.

He was the personification of Steve Clifford’s system last season: offense isn’t to be relied upon – and often times can’t be – but gritty, relentless defense will be played for 48 minutes. It was a winning formula for Charlotte,though it hasn’t added up for Kidd-Gilchrist. He’s been a good defender since he entered the league, but can’t do much on offense. He can drive, but has a broken jump shot (he shot less than 30 percent outside of three feet last season); not what teams are looking for out of a wing selected second overall in a talented draft.

But the beauty of Charlotte, and why it’s been the perfect landing spot Kidd-Gilchrist, is that he doesn’t have to live up to expectations typical of a top-three pick.

Despite Kidd-Gilchrist’s shortcomings, since he was drafted, the Hornets have managed to go from the worst team in the league (I know it was a lockout season, but they only had seven wins in 2011-12 – seven!) to an outside-Conference Finals contender.

That turn-around, thanks in large part to playing in the Eastern Conference, has been Kidd-Gilchrist’s saving grace.

So often, high draft picks are crushed under the weight of expectations; they need to be the savior or else why were they drafted that high?

If the Hornets stayed bad, which was perhaps a more likely scenario than their current, improbable reality, Kidd-Gilchrist would be in a tough spot. He’d be expected to score more, to carry the team that spent a No. 2 pick on him, when they could have gotten That Other Guy instead – he’s an All-Star now, you go do that too. Instead, Charlotte’s newfound success has allowed Kidd-Gilchrist to become just what he’s supposed to be, without some chorus of disappointment chanting in the background.

In The Charlotte Observer, Rick Bonnell detailed how the Hornets brought in a former sharpshooter, Mark Price, to help fix Kidd-Gilchrist’s shot over the offseason.

“I told everyone in management this was going to be a process,” Price said, invoking the magic word.

“I always knew this was going to be a big summer for Mike and I give him a lot of credit. We started in May and really broke some things down. He listened, he applied it and the biggest part is he stuck with it. We all know when somebody is making some changes there are tendencies to slip back.”

When Price says he rebuilt this shot from ground up, it’s a literal description. Price taught Kidd-Gilchrist how to stand in proper balance before they ever worked on his delivery point or how to impart the proper backspin to get shooter’s roll.

Winning has afforded Kidd-Gilchrist the luxury of breaking bad habits instead of developing them. If the Hornets were still an Eastern Conference bottom-dweller, he may have been trying to rebuild that shot somewhere else.

Charlotte is poised for a playoff run, and while Kidd-Gilchrist will play an ancillary role, it won’t be an insignificant one. With wings like LeBron James, Carmelo Anthony and (maybe a year down the line) Paul George awaiting the Hornets in the postseason, Kidd-Gilchrist will be the x-factor defensively.

He’ll be expected to guard opponents’ best wing players, and that’s an assignment at which he can excel. Anything he adds offensively, particularly from mid-range and out, is just icing on the cake.

A team on the rise, the Hornets are in a good position, but perhaps not quite as good as their young forward.

If you listen, you might just hear Michael Kidd-Gilchrist make some noise this season.