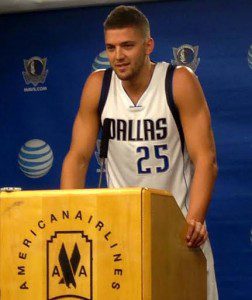 New was the key word of Tuesday night at the American Airlines Center. With a sense of calm alacrity, Dallas Mavericks’ small forward Chandler Parsons emerged from the locker room, ready to play the first preseason game of the 2014-15 season. Donning a new uniform, in front of new fans, on a new home court, it was clear that the new (and hidden) animosity Parsons felt against his former team, the Houston Rockets, would not be presented with biting words, but rather with pure action. New action.

Before the game, Star-telegram writer Dwain Price tweeted this out: 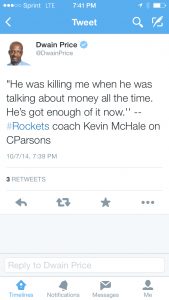 What the balls? A little bitter, Kevin McHale? Parsons has been nothing but cordial to his former team, so the media was curious to see out this preseason game would play out.

The game started out with a rather large, and loud, standing ovation for former Maverick Tyson Chandler, who owner Mark Cuban was able to get back in a trade with the New York Knicks over the busy offseason. It was clear that Chandler was missed and Dallas always held a special place in their heart for him since he was traded away after the Mavs won the 2011 Championship. With All-Star Dirk Nowitzki sitting out (hip troubles), the starting lineup featured Al-Farouq Aminu, Chandler, Parsons, Monta Ellis, and Jameer Nelson. Despite Houston having an early 8-2 lead, Parsons went in aggressively and tacked on a quick four points before Devin Harris was brought in and added to the game with a long jumper. For the first time in a long while, fans were presented with an odd sight: The Mavericks playing smart defense. Wait… what? Despite 22 combined fouls from both teams, it would be the Mavericks with the 29-25 lead going into the second quarter thanks to strong plays from the Chandlers (Tyson and Parsons).

Foul trouble continued to plague during the second with Chandler picking up his fourth foul of the game (yet no call was made when Jae Crowder was tossed to the ground by a Rocket player). The Mavs built up a 10-point lead (37-27) with 8:20 left in the half, but Houston ended up rallying and cutting Dallas’ 12-point lead to 39-33 with just under seven minutes left on the clock. The Mavericks would end up leading 64-54 at halftime, Parsons leading his new team with 14 points, while his former teammate, James Harden, led the Rockets with nine.

Houston began to catch up in the second half however, their defense only taking the Mavericks just so far as the Rockets closed in at the end of the third, Dallas hanging on by the skin of their teeth with a two point lead. The floor seemed to drop out underneath them as Houston took the lead 89-86 in the fourth with nine minutes left to go. The Mavs managed to sneak ahead again 91-90 with 7:22 left, but weren’t able to hold off the visitors and ended up falling 108-111, despite a desperate three-pointer scored by Gal Mekel with 6.4 seconds left.

It didn’t matter. Both the fans and the press saw all they needed to see when it came to their starters, and especially from Parsons, who put on a clinic for his former team. Actions speak louder than words, and Parsons proved it last night.

Houston may have won the game, but the clear long-run winners are the Dallas Mavericks since they appeared to have struck gold with the new small forward.