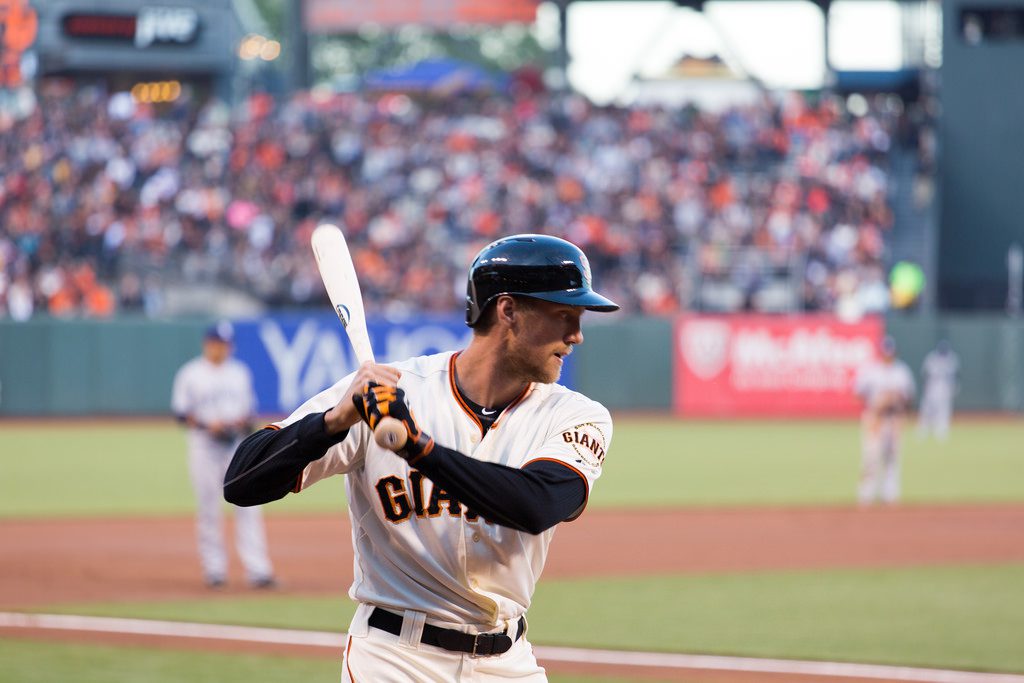 There’s a reason why San Francisco Giants outfielder Hunter Pence is the soul of his team, and it’s not really easy to explicate when attempting to put it in words, so you have to look at his actions. Top of the sixth inning, one out: AT&T Park is humming in the midst of the evening fog, anxiously feeding off the energy of vociferous fans as they stared nervously at the story unfolding on the field. Washington Nationals right fielder, and Grizzly Adams look-a-like, Jason Werth was dexterously reading Giants’ starting pitcher Ryan Vogelsong after falling behind in the count 0-2. Giants skipper Bruce Bochy watched Vogelsong quietly from the dugout, debating on whether or not to relieve the ace since his ERA had dropped during the top of the fifth after allowing a run. Vogey, esurient in his choking matter of resistance, took a breath and launched the ball. Werth sliced it with a snap, and the ball cut through the salty marine air and ventured out into left field. From the angle of the shot, it looked like it would be a double for Werth, and a failed inning for Vogelsong. And then Hunter Pence happened.

That was merely a taste of the plays that occurred during Game 4 of the National Division Series between the Giants and the Nationals.

Despite the otiose rants of commentators projecting an upset for the team, despite the roar of the crowd, the Giants came noiselessly into this game. Vogelsong, a pitcher whose velocity had died somewhat in the past couple of years, started the game quietly during the first couple innings, while his bats made some slight noises. Buster Posey had the first hit of the game at the bottom of the first with two outs and Pence followed with a single before third baseman Pablo Sandoval hit a fly ball out into right field, ending the inning. Giants would end up drawing first blood and were up 2-0, but the Nats answered back after Ian Desmond cracked a pitch into left field at the top of the fifth. Harper then doubled down the left field line, scoring Desmond. Vogey was able to escape the inning with just one run on the board, but was pulled out at the top of the sixth after the stunning Pence play. Harper then tied up the game after hitting a monster homer off of rookie reliever Hunter Strickland, the ball splashing in the dark waters of McCovey Cove as fans looked on helplessly.

And since the Giants have always been a seventh inning team, this is when the magic happened. San Francisco loaded the bases against Aaron Barrett, who came in after reliever Matt Thornton was taken out, and was set to face Sandoval. On a 2-1 count, Barrett tossed out a wild pitch and Panik, who was standing restlessly on third, came in to score. When the reliever then attempted to walk Sandoval, he ended up sailing the ball over catcher Wilson Ramos, which prompted Posey to make a dash to home. He was tagged out when Ramos quickly tossed the ball to Barrett. Despite the effort, the damage was done. The Nationals couldn’t rally against closer Santiago Casilla, and their season came to a soul-crushing end, losing to the home team 3-2.

The Giants are known for torturing the hell out of their fans, and despite the sadomasochistic undertones that the team bestows upon their watchers, fans remain standing, often screaming loudly enough for the world to hear. They will continue to do so until their always labeled underdog team finally obtains the respect they covet. How is it that two World Series rings later, the media is still questioning Bruce Bochy and his ragtag group of misfits? We look to Occam’s Razor to address this very question, sighting that more often than not, the simplest answer is usually the correct one:

“We know that baseball’s not won on paper,” Giants first baseman Brandon Belt said after the game.

That very heart was beating loudly on Tuesday night when the jacinth fireworks flared overhead after the ninth, the Giants and their fans matching the tone of the blasts with their own cheering. The Nationals, a team most baseball analysts predicted would head to the 2014 World Series, walked away from the wailing park dejected. They had the best record in the National League. They had a stellar regular-season ERA. They had the hottest bats. They had Bryce Freaking Harper, for the love of crap. So what the hell happened?

And, most importantly, Bruce Bochy happened.

The Giants go on to face the St. Louis Cardinals in Game 1 of the NLCS on Saturday night.