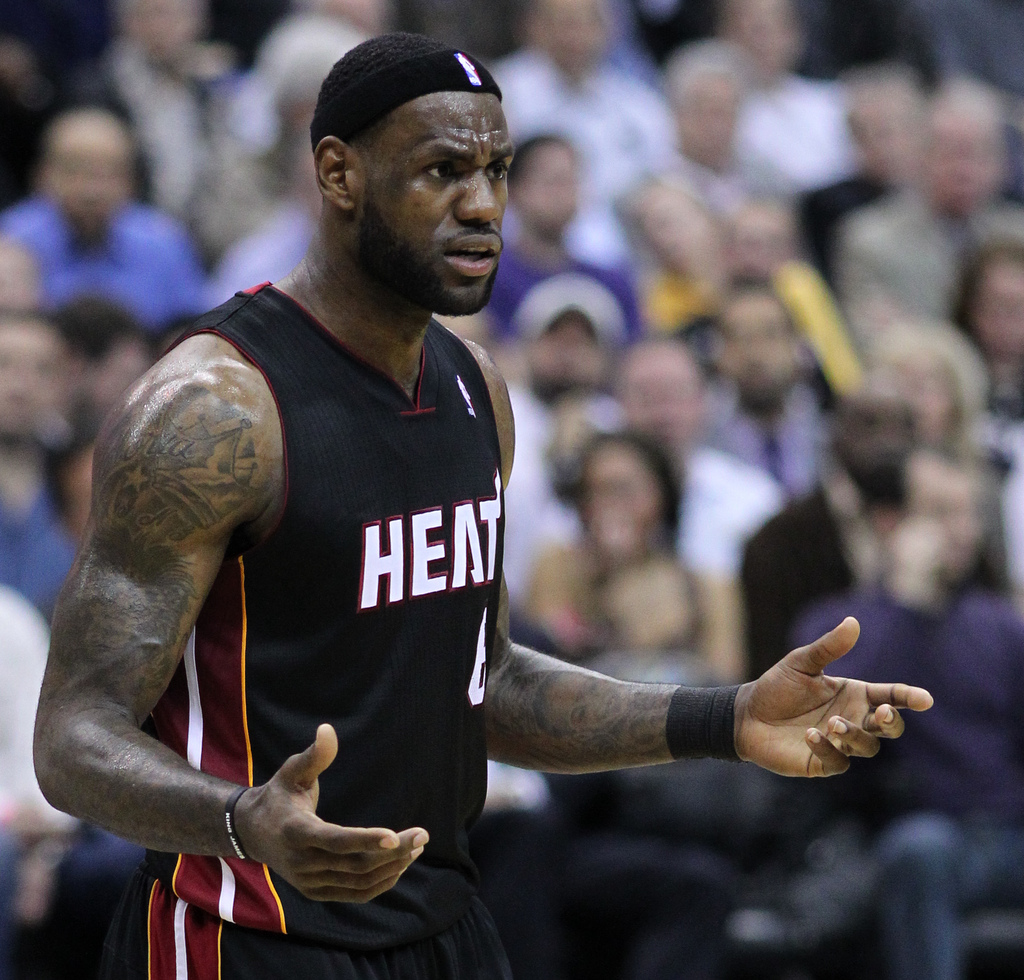 Present tense. I had booked a few poetry readings in Wynwood, a hoodie hood in North East Miami, and I was lucky enough to find time and company for professional basketball, albeit Preseason.

I convinced my friends Uncle David, who is not my, or anyone’s uncle, and Nickel, who is made of stoned lead, to attend a lauded preseason presentation of the National Basketball Association between the Miami Heat and my Orlando Magic. Yes, I call New York City home, but I was born, tortured, and artistically blessed in the Puerto Rican ghettos of Orlando, Florida. It is much more than Disney, folks. Much more.

I was more excited than my compatriots, to say the least, both of whom are bigger fans of football and free booze. Just as well, these two teams have somewhat of a new look. The Heat is without their king, yet still proudly stuck with their flashy prince, Dwyane Wade. The Magic, however, are an entirely new franchise. They are young and mostly untested.

Of course, I am wearing a Magic shirt, and I walk into American Airlines Arena with my chest puffed out. The three of us pale hoodlums acquire some beer on the poetry venue’s dime and head for our seats. I know it is a preseason game, but there is barely anyone in the building when we arrive. We realize this immediately and so we move further down and closer to center court.

The teams are stretching and shooting around; I am as excited as a child on Christmas morning to get my first look at this season of basketball. Any sports fan knows that with each season, comes a promise that is like a drug. Short-term memory erases last season’s ills and the heart speeds up as the impending possibility of another year, that may be “our year”, looms closer. Then, splish-splash, it is upon us like a whirlwind, and again we are doomed to laugh and cry and pray and recite GO GO GO!

Uncle David disappears and comes back with stolen whiskey for three. I take mine in one gulp, and assess the situation. Josh McRoberts needs a haircut. Birdman got a haircut. Udonis Haslem didn’t show up. Heat fans make me want to throw-up. Tip-off is about to jump and this place is all but dead. Oh well, I think, I have a front row seat to the beginning of another year of chaos, no matter how good or bad. This whiskey works instantly. After the ball is tipped, I am on my heels shouting for the Magic; eventually Nickel has to pull my shirt and sit me down.

There are two to five other Orlando Magic fans in the fair-weather arena. I know this because I hear them. With each play, they are louder than the entire Heat collective. Heat fans show up late and leave early. This is a known fact in encyclopedias.

It is a close game from the beginning. The Magic start Luke Ridnour, Evan Fournier, Tobias Harris, Aaron Gordon, and Nikola Vucevic. The Heat start Norris Cole, Dwyane Wade, Luol Deng, Shawne Williams, and Chris Anderson. If you know the NBA and its cast of characters, you realize it is like no other sport. Sure, the NFL has the ratings, and MLB has its soap operas, but the NBA has character.

Elfrid Payton comes into the game early for the Magic. Quickly coming up with two big steals; one against D-Wade; the other is followed by a big bucket. Immediately, he and big bearded man, Kyle O’Quinn seem to have chemistry. Indirectly, Kyle O’Quinn comes up with 8 points in his first five minutes off the bench. Tobias Harris is also looking sharp in the Magic’s first preseason game. He makes his first four shots for ten points.

Going into halftime, the Magic were up 52 to 47, so I was feeling good. I excused myself from my distracted pals and went to the bathroom. I took care of business, and while I was washing my hands I inadvertently got soap in my eyes. That’s when the Heat familia started talking trash. After all, I was wearing an Orlando Magic t-shirt in their territory. Yet most of the people here are wearing Nikes with matching Oakland Raiders hats, Oklahoma City Thunder shirts, Chicago Bulls shorts, and Oakland A’s hats, and Charlotte this and Brooklyn that… the cross-coordination list goes on.

With bones around my neck, I bite my tongue, because I am too old and tired to argue. In the words of Rasheed Wallace, the ball don’t lie. Even fans should let the ball do the talking.

Just as well, I am reminded of the summer of 2009, when I was in LA while the Magic were facing the Lakers in the Finals. I got called numerous politically incorrect names and slang walking around Venice Beach while rocking an Orlando Magic shirt. It is tough being an Orlando Magic fan, especially anywhere outside of a few parties in Orlando itself, and I have called New York City home for ten years. I swear I am the only Magic fan in Manhattan, despite how many blue Jordans I see matched with a Magic hat on the 4 or 5 trains. How bad is that?

I return to offensive fouls and more whiskey and the game tied at 59 – 59. I liked Luke Ridnour until he fired up a terrible shot which lead to awful transition defense and a Miami go-ahead bucket. More whiskey and more cursing.

Uncle David lives in Ft. Lauderdale. He calls himself a Heat fan, but he is busy looking at girls and checking his phone. Nickel is with me for the most part, into it, making fun of me for standing up and sitting down and then standing up again and ringing my neck and pulling my hair and talking in constant run-on sentences. James Ennis, the rookie out of Ventura and Oxnard, who played a year in the D-League and a year in Australia is looking good and solid for the Heat. Apparently, in one of their preseason game he lead all scorers with 17. That was against the Pelicans. The Heat lost.

Down the stretch it is neck and neck, back-and-forth. The lead changes each minute and moment. Even for a preseason game, this one is getting raucous. The Heat fans are getting louder with their hands and vocal chords. Ennis hits a big three. Shannon Brown comes up with two steals. And suddenly there are seconds left on the clock and the Heat are up by two.

I am sweating and wiggling, wishing that the beer cashiers were open past the third quarter. My all but indifferent friends are even getting into this. My phone is blowing up with text messages from Orlando to New York to Los Angeles to Denver. Magic fans unite. There is hope. And suddenly, I am thinking of that movie Hackers, starring Angelina Jolie and Johnny Lee Miller. I take off my shirt, revealing my gut and my tattoos, twisting it around my head like a helicopter, but I am screaming for Orlando, not Miami, which confuses each witness and passerby. I am yelling so much nonsense that I miss the inbounds pass.

We are going to Overtime thanks to a two-point baseline popper from St. Bonaventure product, Andrew Nicholson. I play basketball in New York, at the 92nd Street YMHA with an old dude named Jim who once played for St. Bonaventure. I remind myself to text him after the game. Ultimately, I know I will forget. But I know I will see him and have a good basketball story when I get back to the city.

Two seconds into OT, you can see the hoards of Miami marching ants heading for the exits. I am sorry Shabazz Napier didn’t help the Heat win in regulation, but at least give OT a minute or two. Roy Devon Marble, a rookie for the Magic out of Iowa, scores 8 of his 13 in overtime. The Magic stretch the lead to seven at the end of everything. I am happy as a lucid pig, but I am confused by this town. My friends seem despondent even though they didn’t care about the outcome at the beginning of game.

Maybe South Florida is different without a certain someone. Miami is a city of a thousand neighborhoods. Despite what Alonzo Mourning tells you, this team like this city is always in transition.

After the game, I ditch Nickel and Uncle David and proceed to walk back to my hotel, hoping someone will notice my Orlando Magic shirt and give me the business. I was expecting a little jawing from the locals, in sports terms. I was disappointed when I got nothing. The salty streets were almost empty. It is 70 degrees, so it is “cold” here, and again it is only Tuesday and only preseason, yet the forgetfulness in this town is either a blessing or a curse.

It’s the same in Orlando, I guess. Once Dwight was traded, most middle-ground sports fans gave up and went back to their college football routines. Who can blame them? It is different in New York and LA and Chicago and Boston, the citizens bleed with players and they carry those crosses to work and church and temple and school and parties and field trips and everywhere else, because those teams are those cities and vice versa. In cities like Orlando and Miami, there are other things to distract from the distraction of sports. It’s a weird vortex.

The king has left Miami, gone are the witnesses. I respect guys like Dwyane Wade and Udonis Haslem, for not only being Lifers, but for giving a fair-weather town like Miami something close to a foundation for a system of forever fans.

I walk and recite and sweat in the night, while other wayward pedestrian Floridians wear sweaters and hoodies. Pat Riley threatens me with a knife. The best thing ever is when you get the best thing ever. That changes with sports and life. This was a fine Tuesday evening of competitive preseason basketball. Sports is the eternal debate. Good versus evil. Competition can be a good thing. Let’s leave it at that. Goodnight.