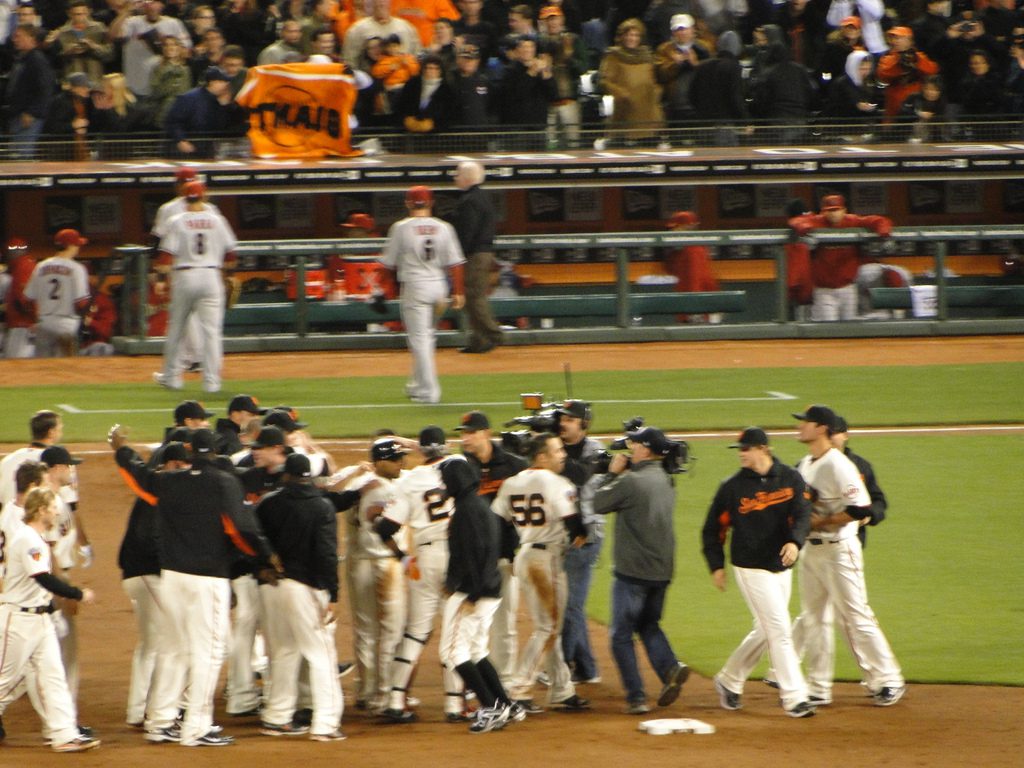 Do the St. Louis Cardinals realize that they’re playing for a World Series appearance? Given all the defensive miscues and collapses under pressure in this NLCS, it’s becoming easy to doubt their fortitude as a unit. From profound lapses in judgment by Matt Adams to boneheaded moves by Mike Matheny, the Cardinals must have left its collective head in the team hotel.

The San Francisco Giants have been the exact opposite. That’s largely why they emerged with a 6-4 victory in Game 4 and have taken a 3-1 lead in the series. With a relentless offensive attack that scores in a variety of ways and rarely strikes out, the Giants are simply playing baseball the right way. They clawed away for 11 hits and six walks. Buster Posey knocked in three runs while Hunter Pence, Gregor Blanco, and Joe Panik each knocked in one. That’s widespread production throughout the lineup.

On St. Louis’ end, the mistakes were baffling. Let’s start with the miscues Adams made at first base. In the bottom of the sixth inning, Marco Gonzales was pitching as runners were on second and third with one out. With St. Louis up 4-3, Blanco of the Giants hit a sharp grounder to Adams, who had a fairly routine opportunity to nail Juan Perez at home. Instead of making a decisive throw, Adams stumbled and appeared hesitant. His late throw allowed Perez to score. On the next play, Joe Panik grounded to Adams. After the first baseman tagged first, he foolishly threw to second instead of home. That mistake allowed Brandon Crawford to score and gave San Francisco a 5-4 lead.

This inning seemed to bury what happened earlier in the game. It has to be noted that the Cardinals had a 4-1 lead midway through the third. They built this lead on an Adams RBI single in the first. A.J. Pierzynski did the same thing in the second. The Cardinals plated two in the third on a Jhonny Peralta run-scoring double play and a Kolten Wong home run. With this 4-1 lead, starting pitcher Shelby Miller crumbled. His command wasn’t sharp and his overall performance wasn’t close to what St. Louis needed. When he exited in the fourth inning, the boneheaded moves by Mike Matheny began.

He used Randy Choate, a late-game weapon and lefty specialist, to record the final out of the fourth. Carlos Martinez, the flamethrower set-up man typically designated for the eighth, was used in the fifth. In the next frame, a 4-3 lead was still intact. Pat Neshek was available at that point. He’s the team’s best relief pitcher and its most versatile. Seth Maness was another logical candidate for that spot. Instead of Neshek or Maness, Matheny opted for Marco Gonzales. The 22-year-old rookie is a spot starter and a long reliever that boasted a regular season ERA of 4.15. With the season essentially on the line, was Gonzales truly the best option?

Matheny should know the answer to that question. He wasted Choate in the fourth, used Martinez two or three innings too early in the fifth, and should’ve went with Neshek for the sixth. Hindsight bias? Not so much. The moves were head scratching well before the predictably poor results poured in. Potential alternative would be this, squeeze Miller out to finish to fourth, use a combination of Maness and Choate for the fifth, and give Neshek a clean sixth. Not ideal to have basically three innings of outs to get for Martinez and Trevor Rosenthal, but I’d rather take my chances with a set-up man and closer combination than with Gonzales even sniffing a season on the line situation.

The defense of Adams certainly gave Gonzales a line score that he didn’t deserve, but Gonzales set the table with a shaky performance of his own. He should’ve never been in the game during that crucial spot. Bruce Bochy seemed to have all of his players in the right spots as he severely out-managed Matheny. Yusmeiro Petit was used at the perfect time after a horrible Ryan Vogelsong outing. Petit pitched three scoreless innings. Bochy then used three pitchers to navigate through the seventh. With a 6-4 lead at that point in the game, everything shaped up perfectly for Sergio Romo and Santiago Casilla to finish the contest.

Matheny’s decisions were head scratching with poor results. Bochy’s decisions were logical with expected results. Managerial moves played a tremendous role in Game 4 of the NLCS, as did team defense. The Giants had a clean game defensively as the Cardinals’ defensive performance was anything but. A quick turnaround is in store for tomorrow’s Game 5. In a showdown of aces, Madison Bumgarner of San Francisco will oppose Adam Wainwright of St. Louis.