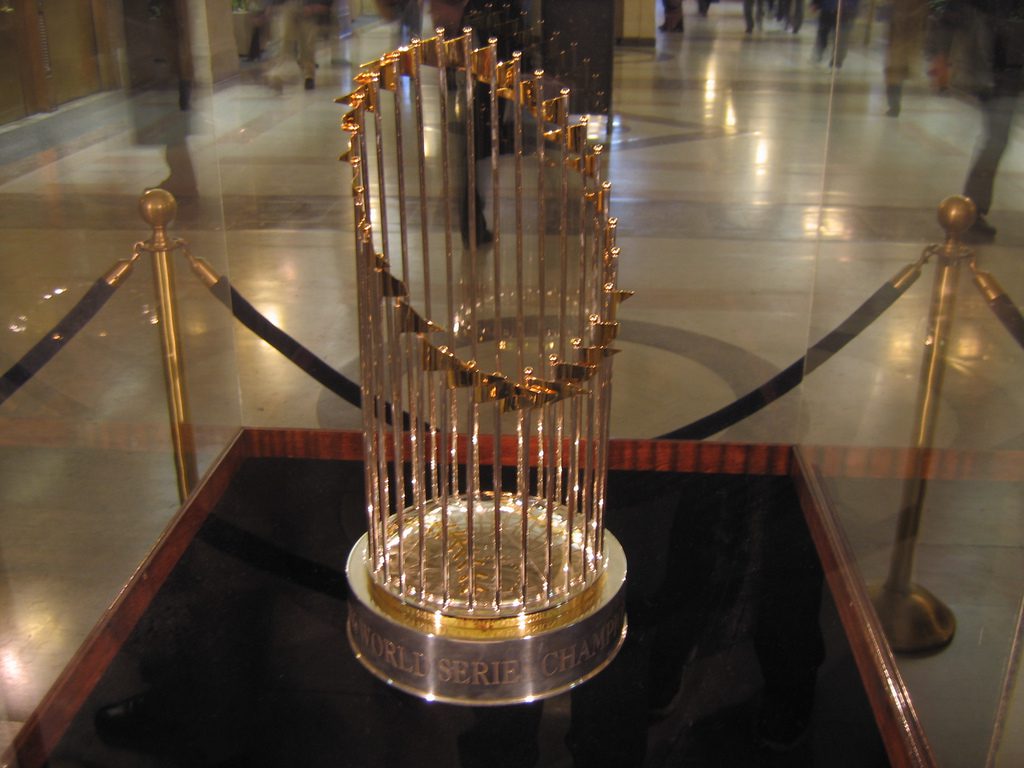 95 feet and a few inches are the difference between a tie game and going to the World Series.

In the bottom of the first inning, Eric Hosmer chopped a ground ball towards Baltimore Oriole first baseman Steve Pearce who fired the ball to catcher Caleb Joseph, only Joseph couldn’t hold onto the ball and the Kansas City Royals scored two runs. That’s all they needed to become 2014’s American League champions. Ryan Flaherty’s homerun drew the score closer, but the game was never as close as a 2-1 score would indicate. The Royals were better, and they have been all series.

It starts with Alcides Escobar and Nori Aoki advancing on eventual ALCS MVP Lorenzo Cain’s sacrifice bunt. Hosmer doesn’t hit the ball especially hard, but few Royals have clobbered the ball during this sweep. The margin of victory has been one run with the exception of Game 1, where the margin was two runs. Timely hitting, excellent pitching and sublime defense allowed the home team to frolic at Kauffman Stadium, snapping selfies with cell phones that weren’t a glimmer in Steve Jobs’ eye the last time Kansas City’s local nine advanced to the World Series. George Brett’s celebration proved the more things change, the more they stay the same, his exuberance exceeded only by those who made this moment happen.

This game unlike the others had an air of inevitability after Hosmer’s RBI-inducing fielder’s choice. The Royals marched towards destiny with the Orioles as unwilling accomplices. No one desires to be the foil, but Baltimore gave Kansas City a fitting test of postseason worthiness. The Orioles didn’t lose this series – the Royals won it. Kansas City’s pitching matched Baltimore’s. Their hitters certainly couldn’t match Baltimore’s explosiveness, but proved equally effective through infield hits, sacrifice bunts, bloop base hits, and seeing-eye doubles. The defense is where Kansas City shined.

Game 2 was Lorenzo’s run. Game 3 was Mous’s dive. Game 4 was Gordon’s crash. Kansas City’s outfield is where base hits go to die. Mike Moustakas flashed such brilliant leather at third base that for a moment fans forgot that the better third baseman is currently on Baltimore’s disabled list. Salvador Perez handled the pitching staff unlike any catcher his age. His mature, calming presence behind the plate had much to do with the Royals’ excellent pitching. Hosmer, Omar Infante, and Escobar made the interesting plays routine, and the spectacular merely interesting. Yet that outfield – Gordon, Cain, and Aoki flew to fly balls with greater intensity than bees around a hive. Unless a ball was struck with severe force, that ball had no chance of landing cleanly for a hit. Baltimore’s offense must wonder if there was anything they could do short of hitting the ball over the outfield’s boundary. A fair question would be could these Royals rob homeruns with the same aplomb they steal basehits.

The bullpen closed out Baltimore mercilessly. Herrera to Davis to Holland. There’s no catching up with that gas, and any game where Kansas City has the lead going into the 7th is effectively over. Power pitching once again trumped power hitting.

The Orioles certainly didn’t deserve a sweep. They played courageous baseball and gave a spectacular argument to Kansas City’s perceived, and ultimately real, destiny. They loaded bases, strung together hits, had excellent pitching and fought for that one extra run that just never seemed to arrive. The gods of baseball didn’t smile upon Charm City – not once. The great shame is Baltimore will not be remembered for an impressive 96 win campaign; they’ll be remembered as the team swept by this unheralded Midwestern baseball franchise.

Now the Royals await the winner of the Giants-Cardinals series. There could be a 1985 rematch in which Cardinals’ fans will no doubt patronizingly refer to as the Don Denkinger Dual. Or the Royals could be matched up with another team that plays great defense, gets timely hits, and has some amazing pitching – the Giants. Baseball is that much richer for an autumn of Cain, Hosmer, Moustakas, and Gordon. What remains to be seen is if destiny will smile upon Kansas City for another fortnight.