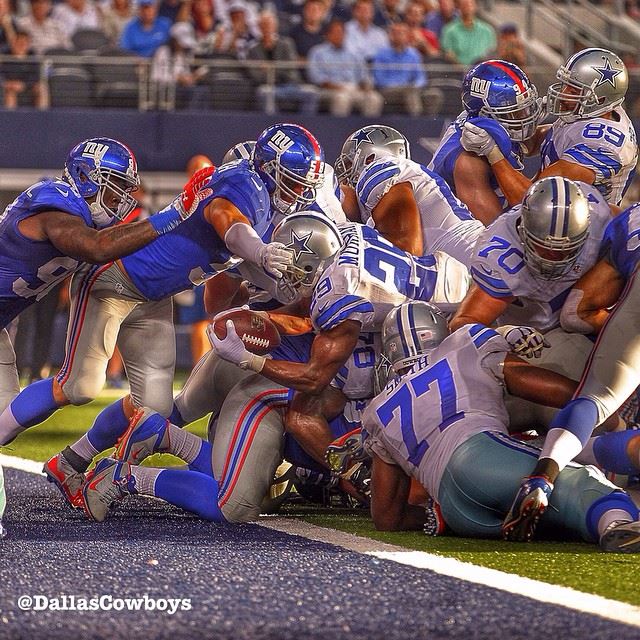 Amidst the hype and hysteria that came along with Peyton Manning breaking Brett Favre’s all-time touchdown record, something was lost. Russell Wilson became the first quarterback to rush for 100 yards while throwing for 300 in a loss, and DeMarco Murray became the only player in league history to run for 100 yards or more in each of the first seven games of the season. During the game, my wife was puzzled when a graphic showed Murray sandwiched by players like Terrell Davis and Adrian Peterson. I had to explain that those were total yards during their first seven games. Some of those players had games that approached (or surpassed) 200 yards in a contest, giving them a higher tally than Murray to this point.

Murray is on track to pass the 2,000-yard mark, and that would make him just the eighth player in league history to do so. He is averaging just over 130 yards a game, which isn’t that far off the 131.6 yards a game Eric Dickerson needed to amass the single-season benchmark of 2,015 that has yet to be broken. It’s worth noting here that O.J. Simpson broke 2,000 yards in 14 games, averaging over 143 yards a game. Given one more contest I image Juice could have bested Dickerson’s mark.

But I digress, I am here to talk about Murray and how likely he will be to keep up this pace. Murray’s achievements have been so vast thus far that pundits wonder if he could win the MVP. I never particularly liked the MVP award for two reasons. One, it always seems to be more about media coverage than about actual play. The guy who gets the most coverage for his accomplishments wins, even if he’s not the most deserving. Two, players on good teams get more recognition. I almost feel the inverse. A guy on a poor team is getting extra attention from the opposition, specifically if he’s the only star. The presence of Dez Bryant means that Murray rarely sees nine-man fronts. Peyton Manning is doing amazing work, but he also is throwing to three Pro Bowlers.

The size of this accomplishment can’t truly be measured because it is so immense. The Dallas Cowboys were supposed to be a team that you could walk over this year. Instead they sport a 6-1 record heading into a very winnable Monday night affair against the ailing Washington Redskins. Dallas has played some teams with very good defenses against the run, and Murray havs come out with over 100 yards each time. The Cowboys have also faced teams who have publicly said “we are not going to let Murray beat us,” and he’s come out with 100 yards every time. There is no trickery, no deception to what the Cowboys are doing. They run it right at you. To be fair much of this praise should be going to the offensive line. Three of the five were first-round draft picks over the last three years, and they are showing their value. The team is averaging just shy of 160 yards a game on the ground. Murray is averaging 4.6 yards a carry, and the rest of the team is averaging 4.3. That’s not exactly a huge drop off.

So can Murray break 2,000 yards, win an MVP, and break Eric Dickerson’s record? In short the answers are no, yes, and no. I have to assume that DeMarco at least stays healthy for 16 games. Without this assumption the rest of this article is pointless. Murray has never played all 16 games, and this pace would be insane for a running back without a history of medical malfunctions. Even staying healthy the likelihood of Murray keeping up this pace is unlikely. Teams will continue to look to find ways to hinder this aspect of the Cowboys offense. In looking at the balance of the schedule, with the exception of the Arizona Cardinals, the Cowboys don’t face a team with a fantastic run defense, so it’s not impossible. But just because something is possible doesn’t mean it’s in the Cowboys’ best interest. So long as no one else is putting up insane numbers I could see Murray winning the MVP. In the age of passing, to average 100 yards a game on the ground would be enough to at least make it a difficult discussion. And that’s why the Cowboys should continue to spell Murray any time they can. They want him healthy, and they don’t care about the numbers. Murray could rush for 10 yards in a game, so long as the team wins I am sure the coaching staff is going to be alright with that production (so long as it’s not on 30 carries).

Murray is in the final year of his rookie contract, and opted not to accept initial offers made to him from the Cowboys front office in the hopes of having a big year and cashing in. He’s won that battle … so far. If he keeps up this pace the numbers will show him as a capable back, but the wear on his body might be enough to keep teams weary of a long-term deal and big money. His injury report may too keep teams from taking the plunge. The best thing for Murray and the Cowboys would be to reach a deal where Murray gets paid as a top 10 running back, leaving Dallas with the money to secure the O-line talent that made him that way. Murray would get more money on the open market, but it’s likely he will never see this kind of success again. He may not break 2,000 yards, or Dickerson’s record, but the number he should be most concerned with is how many more yards he could have with the solid foundation in Dallas.