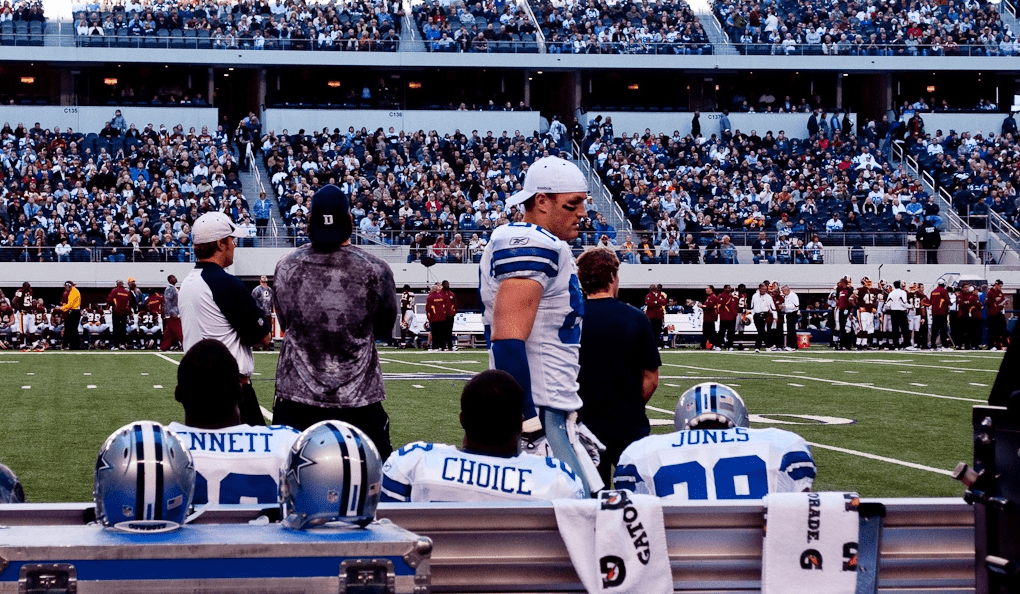 The other week Dallas Cowboys quarterback (and media punching bag) Tony Romo said that Jason Witten was the best Cowboy ever. I won’t even get into how absurd that statement is when you talk about players like Roger Staubach, Emmitt Smith, and Larry Allen. I think you could include him in the discussion, but without a championship it’s a hard line to walk. However, Tony Gonzalez never won a Super Bowl, so it is fair to compare him with Witten. Is Jason Witten the best tight end in NFL history?

Witten has passed Shannon Sharp to be in solo possession of second place behind Gonzalez, so this really is a two horse race in my mind. Tony played for a whopping 18 seasons, so Witten has about six more to go were he to play the same amount of time. So statistically speaking, if he maintains his past production he should break those records. The fact of the matter is that he won’t. Witten is still the starter, but he is averaging a paltry 38-yards a game, and backup Gavin Escobar has far more touchdowns than Witten does this year. Escobar is the new look tight end that everyone in the league wants on their roster. Lean and fast, he looks more like a bulked up wide receiver than a stretched out lineman. But having the most yards or touchdowns does not make you the best.

A prime example of this would be Emmitt Smith. Smith owns the rushing yardage record and the touchdown mark in the NFL, and yet in the conversation of the best backs of all times people will bring up players like Barry Sanders, Jim Brown, and Walter Payton. They will bring up the offensive, like that Smith had to run behind, and all the other factors that lead to his vaulted success. I will concede that Tony Gonzalez has, and will have, (until Jimmy Graham breaks them) the all-time marks in yards and touchdowns for a tight end. However, I argue to you that Witten is the best tight end in NFL history.

When it comes to “best ever” I always want to look at complete. I think LeBron James is better than Michael Jordan because of his defensive and rebounding abilities. I think Mike Trout is better than Melky Cabrerra because Trout plays defense well in a tough position combined with his hitting numbers. I think Deon Sanders is the greatest athlete of all time because he played offense, defense, and special teams well in the NFL, as well as hit and could field in MLB. So I put Witten ahead of Gonzalez because I believe he does more.

Throughout his career Gonzalez was asked to be a blocker at times. He did an adequate job of it. Looking at the film though he whiffed as often as he locked on with a player. Tony played far too upright, and defenders, particularly defensive linemen, were able to get under his pad level and drive him off his spot with relative ease. Don’t get me started on how bad a blocker Shannon Sharp was. Darren Sproles puts more effort into stopping defenders and he’s literally half the man Sharp is. Okay, maybe two thirds. Witten is a textbook blocker, to the point where I would rather have him suit up at tackle than many guys in the league currently assuming the position. Witten does lack the weight to anchor his spot against many of the defensive lineman in the league, but his technique, particularly in the run game, is so well honed he seems to win the battles he needs to just long enough.

Comparing Witten to Gonzalez as a pass catcher is like comparing a pickup truck to a sports car. Gonzalez had speed, moves, was nimble, he was the ultimate mismatch. Anyone who had the speed to cover him wasn’t big enough. Anyone big enough wasn’t fast enough. The thing about a sports car is that it’s great for that speed, but you can’t do much else with it. Witten isn’t all that fast, I’ve almost never seen him winning jump ball situations (because I never see him jump). He doesn’t juke guys out of tackles, or shimmy a guy off his route at the break. He catches the ball for first downs, blocks, and does anything needed of him. He is a milder, more rounded, Mike Ditka. If you watch film on Witten you’ll see him getting to the sticks virtually every time he touches the ball. You’ll see him catch in windows that you didn’t think the ball would get through. You’ll see him so wide open you’d think that the defense only put 10 guys on the field. He does all that and then does it all again next week.

The argument here for Gonzalez would be that he was such a weapon that teams often game planned just for him. He regularly saw double coverage and still managed to put up big numbers. Witten has always been lost in the shuffle. Teams know that he’s a target, but he’s never the first target. Double coverage is almost a waist, but then you kick yourself when Witten pulls off that 3rd and 10 you were in such desperate need of shutting down. I hear it from announcers all the time “how do you leave Jason Witten that wide open?” Lost in the shuffle, that’s how.

Jimmy Graham is the most pass orientated tight end I have ever seen. He will likely go on to break all of Tony’s records, despite teams double covering him. Gonzalez to me will always be better than Graham, because of the way he was a more well rounded player, the way I believe Witten is even more well rounded than Tony. The sports car is an amazing piece of machinery, but when push comes to shove what vehicle do you trust to get the job done?