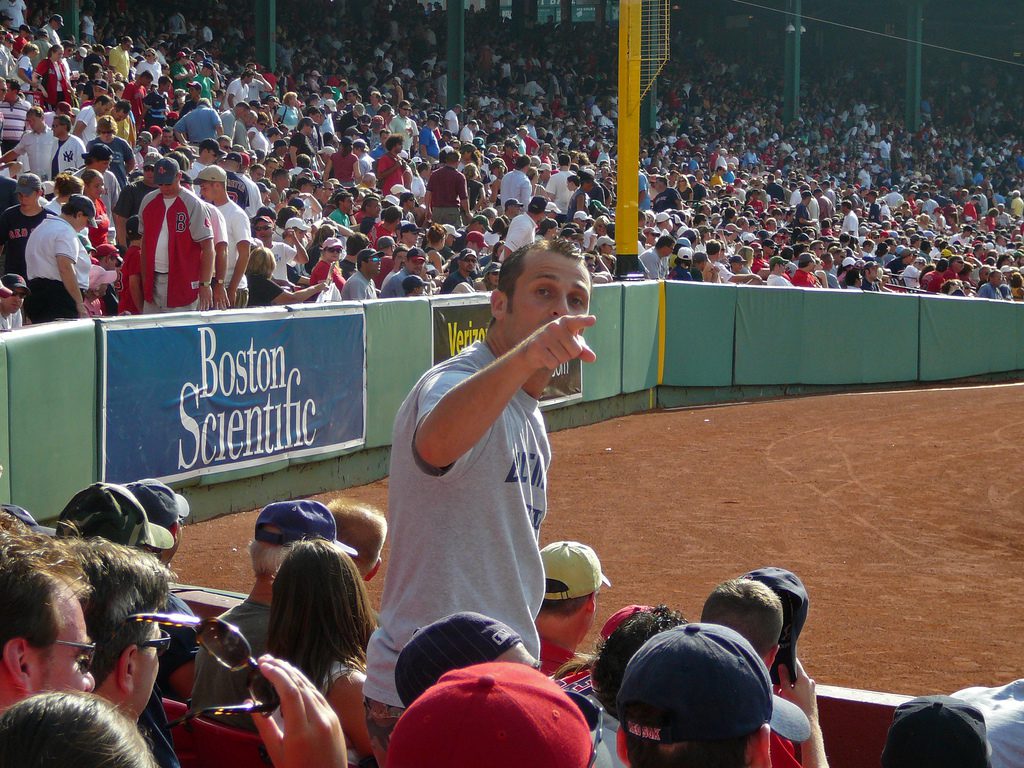 I have traveled the world attending sporting events. I count myself as being incredibly lucky to have seen a World Cup, a Super Bowl, and playoff hockey and basketball in more than my home country. When I go to a venue, I often take note of the building and the fans. The game in front of me is nice, but too many factors are at stake to make the actual game enjoyable to watch.

While most of my experiences have been positive, I have run into enough negative instances to break down my top five places with the worst fans. I present them to you in no particular order, as I leave the scale of “awful” up to you. I recognize that the portrait I paint does not apply to all fans attending the games of the teams I mention, but these observations are based on person experiences.

Toronto Maple Leafs (regular season)
You will note the “regular season” at the end of the title because the playoffs are a different kettle of fish. In the playoffs, the Air Canada Centre (ACC) is blanketed in blue and white and the feeling is electric. During the regular season, the building is filled with suits and is more indifferent than interested. I put this on the list because never have I attended games that cost so much with fans that could care so little about the event in front of them. Corporations do own most of the season seats at the ACC, but I cannot make this an excuse. The ACC should take note of how often people show up in gear (I don’t care what team) and if the people for the seats show up in NHL apparel less than 50% of the time, then they should have their season seats revoked. Fans of the sport deserve to be at the games.

Buffalo Bills
I go to a Bills game every year. Most times I am sporting neutral gear: I’ll rock some Bills attire at times, and on occasion will represent for the opposing team. When I wore my Dallas Cowboys gear for a Monday night game a few years ago, the Cowboys won after recovering an onside kick and hitting a final second field goal. During the game, the father and mother of a 10 year old in front of me continuously encouraged their son to seek a high-five whenever Buffalo scored or intercepted the ball, which I obliged. They were less than happy when I sought the same high-five back when Dallas won the game. On my way out of the stadium, I was hosed down with mustard by a guy hiding between cars in the parking lot, who I watched do the same thing to anyone he could wearing Dallas gear. It is a non-stop onslaught of homophobic, racial, and derogatory comments coming out of every-other person’s mouth in the stands regardless of who they are playing. I get that there isn’t much else to cheer for in Buffalo, but have a little decency.

Brooklyn Nets (playoffs)
I have to make note of the “playoffs” because that is the only game I’ve been to in Brooklyn. I went down to New York this past April and got lucky to have the Nets in the playoffs the same time I was there. I got to see a New York Yankee game and a New York Ranger playoff game too in a four-day span, but now I’m just bragging. The Nets were playing the Toronto Raptors in the first round, and the insults were as offensive as they were inaccurate. The Raptor players were told to “go back to Canada, you terrorists”, and that “America doesn’t want you here”. The reason this was so out of bounds (aside from the fact that I’m Canadian) is that a majority of the Toronto Raptors are actually from the United States. I get that the playoffs provide an added level of hysteria, and that common sense is usually lacking at this time, but have a little respect for the players. They did make it to the playoffs too.

Chicago Bears
The Chicago Bears play in a wonderful stadium (Soldier Field) that sits right on the waterfront. It’s the only stadium I’ve walked to passing aquariums and museums and brilliantly manicured parks. It’s also the only stadium I’ve been to where I’ve been heckled by several people for wearing the home team’s jersey. I own over 50 jerseys that span various sports and teams. A vast majority of those jerseys sport ANDERSON sewn proudly across the back. It helps having a common last name, but I was born with it, so what are you going to do? When I visited Chicago I brought my Mark Anderson jersey with me. Now Mark had been cut by the team a few weeks earlier, later ending up with the Houston Texans that same year. The jeers were mostly to the effect that I should get a jersey of a player that was actually still with the team. I found the comment laughable from guys sporting jerseys of players who had long since retired (great player or not). I can only imagine how bad it would have been if I’d been in the opposing team’s colors that warm October afternoon.

Boston Red Sox (on the road)
Anytime I see the Red Sox playing on the road, there are always fans in the stands. The team’s fan base travels really well, and that’s without it being such an easy team to get behind. So how is it these fans are always the loudest and most “in your face” fans at the ballpark? I can go to a game against Boston in any ballpark in the world and close my eyes and point out their fans to you just by listening. They are that loud. I’d say I feel sorry for the girlfriends and wives that come along, but they are often just as loud, if not louder. The fans are so rowdy that at no fewer than half the games I have been to featuring the Red Sox, I have seen a supporter removed from their seats much to the delight of the crowd around them. The crowd isn’t happy because a fan from the opposing team has been ejected, the crowd is happy because the loud-mouth who was shouting “EHH! Jeetah, you know you saaaawck!!!” will no longer be spilling beer and deafening their ears. I have heard that exact rant from a drunken fan at a baseball game that did not feature the Yankees. I can only imagine what the atmosphere is like in Boston, but I might be pleasantly surprised when I do finally get to visit Fenway Park.

I’m sure you’ve all had your own experiences that would top what I’ve seen, and this isn’t a slight on these places as sports towns. The Toronto Raptors host a very involved fan base when they play. The Buffalo Sabres games I have attended, I’ve never experienced anything like what I do whenever I go to Ralph Wilson Stadium. The Yankee and Ranger games I attended in New York were absolute treats, as were the Chicago Bulls and Chicago Blackhawks games at the Madhouse on Madison. This also isn’t an advisement to avoid these places. The Barclay Center in Brooklyn is an amazing building, and the tailgating in Buffalo keeps me coming back every single year. This is just me pointing out to all the fans of all sports that your actions don’t go un-noticed. The comments you make are heard, and you’re not just a face in the crowd. You impact the enjoyment of all the fans around you. It’s selfish of you to think that you are entitled to act however you wish. Going to a live sporting event is a privilege; treat it like one.