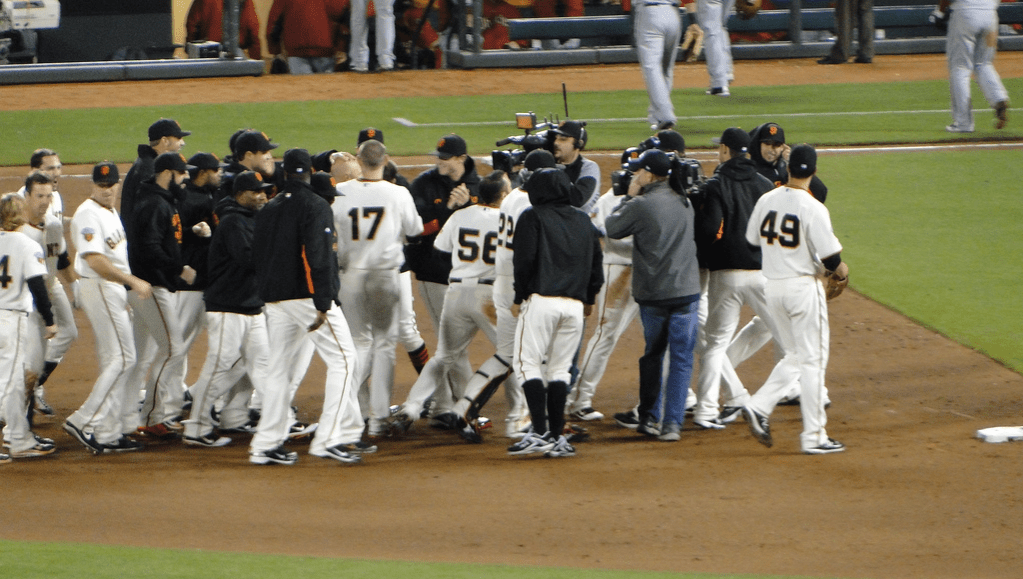 Game 4 of the World Series made one thing extraordinarily clear: the gap between the Kansas City Royals middle relievers and late relievers is a divide of incalculable degrees. In a game of high emotions and utter madness, the San Francisco Giants won 11-4. They went from down 4-1 to up 11-4. It was that kind of contest.

The baseball gods did smile on the Royals early on though. Despite being down 1-0 after a Hunter Pence fielder’s choice, Kansas City knocked in four in the third, which left Giants’ starting pitcher Ryan Vogelsong as a candidate for the most undeserved line score of the season. 2.2 innings, seven hits, and four earned runs. Sound horrible? Absolutely. But the reality that took place was a series of bad luck, weakly dribbled hits, and poor defense. Those aspects doomed Vogelsong.

The third inning production started with an RBI infield single by Eric Hosmer. Omar Infante dealt a major blow with a two-run single, making it 3-1. Salvador Perez tacked on an additional run with an RBI hit to center. At that point, Jean Machi was pitching in relief as he and the Giants were staring down the rabbit hole. Down 4-1, bases loaded, and a full count to opposing pitcher Jason Vargas. Machi nearly walked Vargas and that might have been a death blow. Instead, he escaped the inning and Kansas City never plated another runner.

It was another shining moment for Yusmeiro Petit after Machi exited. He pitched three scoreless innings and was a major catalyst to the Giants’ victory. He kept the deficit manageable and gave his teammates the opportunity to scratch away at the score. As Petit thrived in middle relief, Vargas and the Kansas City bullpen did the opposite. Vargas set the stage for a San Francisco comeback. His performance had an ominous vibe as he failed to deliver much-needed shutdown innings. When his offense gave him a cushion, he allowed the Giants to crawl back. And when he exited, after a line of four innings and three earned runs, those behind him followed in his footsteps.

Jason Frasor wasn’t his sharpest. Danny Duffy struggled to find a consistent rhythm. Brandon Finnegan was completely ineffective and Tim Collins wasn’t much better. The total damage for that foursome? Four innings, ten hits, and eight earned runs. How do you beat the Royals? How do you beat the big three of Kelvin Herrera, Wade Davis, and Greg Holland? You beat them by preventing that dominant group from entering the game. You beat them by attacking borderline solid starting pitchers and vulnerable middle relievers. Give the Giants credit for scoring against pitchers that they needed to score against.

Let’s talk about the players responsible for those series of assaults. Buster Posey‘s RBI single made it 4-2 in the third. The Giants tied it 4-4 in the next frame behind a Hunter Pence RBI single and a Juan Perez sacrifice fly. Those four runs were tagged to Vargas and Frasor. Once it was tied 4-4, the flood gates opened. The madness transpired. The craziness ensued. However it’s stated, the Giants launched a blitzing attack that turned a bullpen battle into a lopsided blowout.

It was Pablo Sandoval‘s two-run single against Finnegan that gave San Francisco its first lead since the first inning. With a 6-4 advantage, Brandon Belt continued the onslaught with a run-scoring single. As if that wasn’t horrible enough for Kansas City, an inning of failure that turned its comfortable lead into a significant deficit, it got worse in the next frame. Much worse. The Giants scored four additional runs in the eighth behind a run-scoring bunt by Gregor Blanco, a two-run double by Joe Panik, and an RBI double by Pence. Over two innings, San Francisco managed to plate seven runs.

This game, as odd as it might sound, was perfectly designed for a Royals’ win. Early lead, timely hitting, and all three major late-inning relievers available to pitch. So what happened? The Giants essentially intercepted the Royals’ game plan. Instead of playing passive baseball and trailing late in the game, San Francisco took matters into its own hands. Enough Herrera. Enough Davis. Enough Holland. The Giants might have had that idea in mind. After all, Kansas City’s biggest advantage in this series is based upon a contingency. Without a collection of occurrences going in its favor, those in particular being early offense leading to a seventh inning lead, the Royals don’t have a major advantage.

The Giants, on the other hand, have a major advantage that isn’t based upon a contingency. That advantage is named Madison Bumgarner and he’s lined up to pitch in Game 5. He’ll be opposed by James Shields, a struggling starter who desperately needs to deliver a quality start.