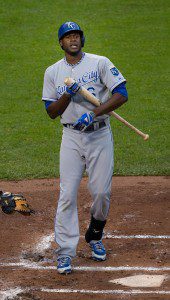 The Kansas City Royals must win consecutive games if they are to win their first World Series in 29 years – a feat neither team has accomplished in the current Fall Classic.

The Royals conserved nothing with their bats. ALCS MVP Lorenzo Cain was most disruptive, a 2 for 3 evening with two walks, three RBI and a run scored paced the Royals offensive attack. It was the second inning effectively deciding Tuesday night’s affair. Alex Gordon lead-off the inning with a single, advancing to third on Salvador Perez’s single. Mike Moustakas continued his revelation of a postseason, doubling home Gordon and perching Perez on third. Alcides Escobar’s at-bat was re-scored three times – he tapped a ground ball towards first baseman Brandon Belt, Belt charged towards home with the intent to cut down the never-running Perez, changed his mind too late into the play and was beaten to the 1st base bag by the speedy Escobar. The play was scored a hit, then a fielder’s choice, finally a hit. Nori Aoki followed up with a single, scoring Perez and advancing the other runners a single base. The hapless Peavy was replaced by Petit, only to have Cain flip a single into centerfield, scoring Moustakas and Escobar. Eric Hosmer doubled, scoring Aoki and Cain with the coup-de-grace being Billy Butler’s double to score Hosmer. The Royas left the second inning with seven runs and the hearts of Giants fans everywhere broken.

The next seven innings featured Cain having an RBI ground rule double, Escobar singling home a run and Moustakas clubbing a ball deep into the Missouri night, but the second inning removed any doubt to the game’s outcome. The Royals’ win was never in doubt after the second, and the Giants responded accordingly.

Game 7 began in the third inning and was suspended after the 9th. It resumes tonight, when Jeremy Guthrie and Tim Hudson take the mound for their respective teams. In an October where the impossible has become routine, the final act of 2014’s postseason should prove memorable and heartbreaking simultaneously.