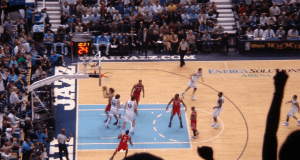 Though the Utah Jazz lost to the Houston Rockets in their regular season opener on Wednesday night, eyebrows still raised at the team’s urgency and statistical success on the court. The young Jazz team hustled hard in the first quarter, beating the Rockets to loose balls and recovering rebounds, but as the excitement and nerves began to wear off, so did the good decisions and precise execution. In the end, the Jazz couldn’t contend with the veteran Rockets’ incessant ability to sink threes.

It didn’t help that Gordon Hayward, had a rough night. As the starting small forward and offensive star for the Jazz, Hayward’s demeanor through the preseason remained cool, calm, and collected. Yet on the regular season opener, he completely buckled. His first bucket of the second half came with five minutes left in the fourth quarter. Furthermore, not a single Jazz player was particularly outstanding when it came to defensive aggression. Dwight Howard of the Rockets attracted a lot of attention down low, opening the outside to dangerous possibilities for three-pointers, which ultimately allowed the Rockets to take the win. The Jazz, on the other hand, had serious difficulties when it came to making points from downtown. With 18 shot attempts, only three landed on the scoreboard.

So why were eyebrows being raised? For the first game of the Jazz’ season, a lot of promising things happened as well. For one, Enes Kanter and Derrick Favors did a great job scoring in the paint during the first half – a momentum that carried through most of the game and resulted in 62 points from the paint. Favors also doubled as a “human eraser” on defense, denying an impressive four shot attempts from the Rockets. Unlike Hayward, veteran forward Trevor Booker made the game look easy as he hustled the court with good defense, physical scoring, and overall active playtime. Though his playoff experience with the Washington Wizards surely helped during the critical moments, he proved to coach Quin Snyder that he deserves significant playing time.

Overall, the Jazz had a decent season opener. They started the game with rushed excitement and tight play that simply dissipated as the clock wound down. For them to win against the Dallas Mavericks on Thursday, October 30th there is one main area the players need to brush up on: becoming more urgent. Snyder is infamous for running a fast offense and what happened on Wednesday night was not fast enough. Though they did a good job getting in fast break points, the Jazz have to find secure, alternative ways to score. Whether its finding a back door, finding an open man, or swinging the ball when needed, they need to keep their shots warm keep the flow steady through the second half.