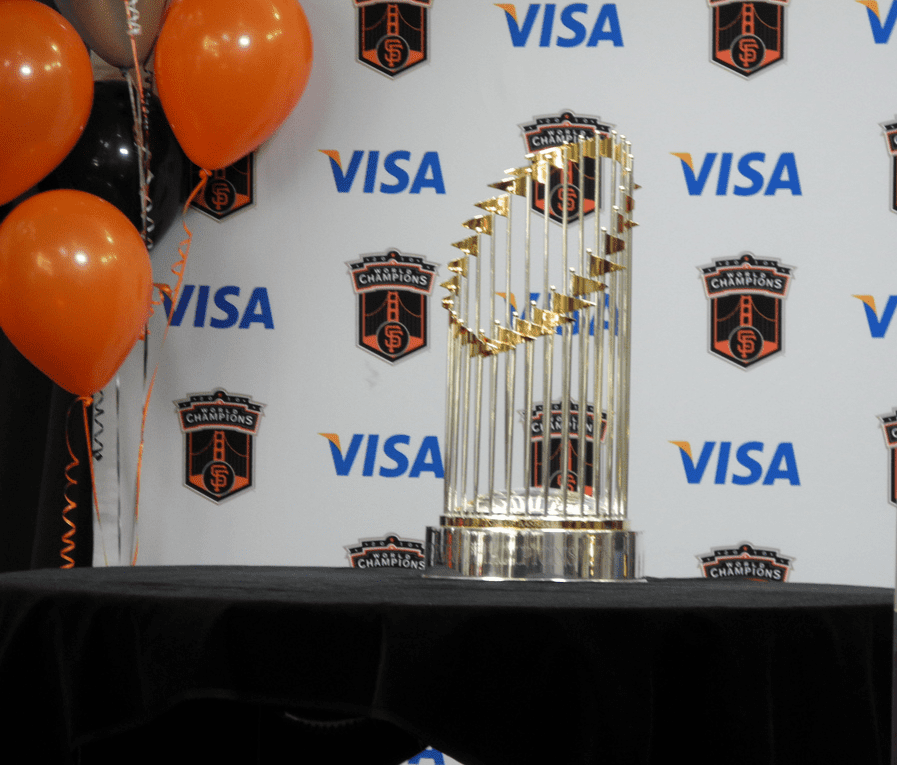 For the third time in five years, the San Francisco Giants have won the World Series; their latest victory is the first time since 1979 a road team has won Game 7, and they prevailed by the slightest of margins.

The 1-2 punch of Pablo Sandoval and Hunter Pence paced the Giants offensively. The 2nd inning had Sandoval reach base after getting hit by an errant Jeremy Guthrie pitch. Pence singled, and Brandon Belt followed up, loading the bases. Michael Morse drove in the game’s first run with a sacrifice fly, followed by Brandon Crawford padding the lead with another sacrifice fly. The Royals replied with Alex Gordon’s double scoring Billy Butler and Omar Infante’s sacrifice fly evened the game. The Royals appeared to be starting a rally in the third inning, but the game turned on baseball’s newest rule addition.

There has never been an overturned call via the replay rule in the postseason – until Game 7 of the 2014 World Series. Ironic, because it involves the Royals and a 1st base call. Right now Cardinals’ fans are screaming about Don Denkinger, as his incorrect 1st base call is blamed for St. Louis losing Games 6 and 7 of the 1985 World Series and the Royals winning. Denkinger incorrectly called a Royals’ runner safe when he was out by half a step. Replay didn’t exist, and Denkinger’s call stood. In the bottom of the third, Joe Panik dove at a hard ground ball hit by Eric Hosmer, flipped the ball from his glove to shortstop Crawford who lasered a ball to Belt, but the first base umpire initially called Hosmer safe on the head-first slide. The call was challenged and reversed, the Giants escaped the inning without injury.

The top of the 4th featured Sandoval and Pence again. This time Sandoval singled, and Pence’s single advanced the hustling Panda to 3rd base. Michael Morse followed up with another sacrifice fly, and the Giants secured a 3-2 lead. This margin remained standing for the remainder of the game, the Giants’ pitching, more specifically their pitcher, locked the game down and emerged as the World Series MVP.

Madison Bumgarner’s availability to pitch was widely known, but he wouldn’t start (there’d be no Derek Lowe 2 day’s rest heroics). Instead, Tim Hudson started the game and was removed after 1 2/3 innings with Jeremy Affeldt pitching 2 1/3. Bumgarner emerged from the Giants’ bullpen and pitched the remaining 5 innings, surrendering two hits and earning his first World Series save. He allowed one run this entire postseason, and easily earned his MVP award.

Historically, what the Giants accomplished in the past five years can be matched only by the Yankees of the late 90s’. San Francisco’s victories in three of the past five World Series set a standard for a modern dynasty. The Giants provide further intrigue because in the years they haven’t won the World Series they didn’t even qualify for the playoffs. However, their pitching always has been a constant and Buster Posey provides leadership and timely hits. Their patchwork lineup is a tribute to Brian Sabean’s creativity in the front office. In an era defined by the innovation going on across the San Francisco Bay in Oakland, the Giants are the most consistent winners in baseball.

The 2014 World Series featured two teams that didn’t win their divisions, scratching and clawing their way to the Fall Classic. Neither team won consecutive games and only two games were reasonably close. The Giants are kings of the baseball world, again, and the victory parade once again features black and orange confetti.