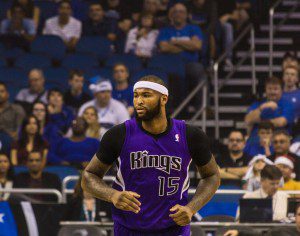 With all the talk of offensive improvement surrounding the Sacramento Kings as of late, this was not the 2014-15 season opener the team was hoping for.

Coach Mike Malone’s team played one half of basketball, coming out of the gate in the second half with unforced errors and a binge of turnovers. DeMarcus Cousins and Ramon Sessions combined for 10 of the team’s 26 turnovers, failing to protect the ball down the stretch of the game. The Warriors capitalized on the mistakes all throughout the second half, as Stephen Curry and Andre Iguodala combined for nine steals.

“To come out here against that team and turn the ball over 27 times for 26 points…you’re not going to beat anybody, nonetheless one of the best teams in the Western Conference. So offensively, very disappointing effort. I thought we played very selfishly,” Coach Malone stated after the game.

One of the key components of the Kings’ second half struggles was the offensive inefficiency of Rudy Gay. Gay offered a Toronto-throwback performance in which he dribbled the ball straight at Warriors defenders and forced up wild jumpers. Halfway through the third quarter he took bad shots on multiple possessions in a row, virtually halting Sacramento’s offensive production altogether. He finished with 15 points on 15 field goal attempts.

True to form, Steph Curry sparked the Warriors’ second-half run with a series of defensive stops, as he forced himself into passing lanes and ripped the ball away from Sessions and Cousins. He scored 24 points, most of them coming off of transition buckets he created for Golden State. The Kings did well to slow his three-point shooting, forcing him to take highly contested shots down the stretch. Curry finished the game shooting just 22 percent from beyond the arch.

The player guarding Curry, Darren Collison, was by far the best player in a Kings jersey throughout the game. His defensive intensity from start-to-finish made Klay Thompson and other Warrior guards cough up the ball, and he created shots for Sacramento in transition. The Kings totaled 11 steals, and five of them were as a result of Collison’s defensive efforts.

“I thought we did a solid job on Curry and Thompson. Despite having [24 and 19] points, they shot a lot. They didn’t have a good percentage, but what killed us, again, was turnovers,” said Collison after the loss.

Collison was the only bright spot for the Kings. Other players digressed and looked uninterested offensively. Ben McLemore played 26 minutes, took five shots, and ended the contest with zero points. Derrick Williams had two points on four shots and shot 25 percent from the field. Where the Kings were bad, the Warriors were perfect. They capitalized on each and every mistake the Kings made, and it cost them. Malone’s mindset of defense-oriented basketball was felt, but the offensive inefficiency was too high throughout the game for the Kings to stand any chance against a superior, playoff-bound team.

The Kings stay home for a game against the Portland Trailblazers on October 31. If turnovers continue to be as big a problem as they were against the Warriors, Portland will have no trouble walking away with a victory on Halloween and it could be a scary night for Sacramento. Pun intended.