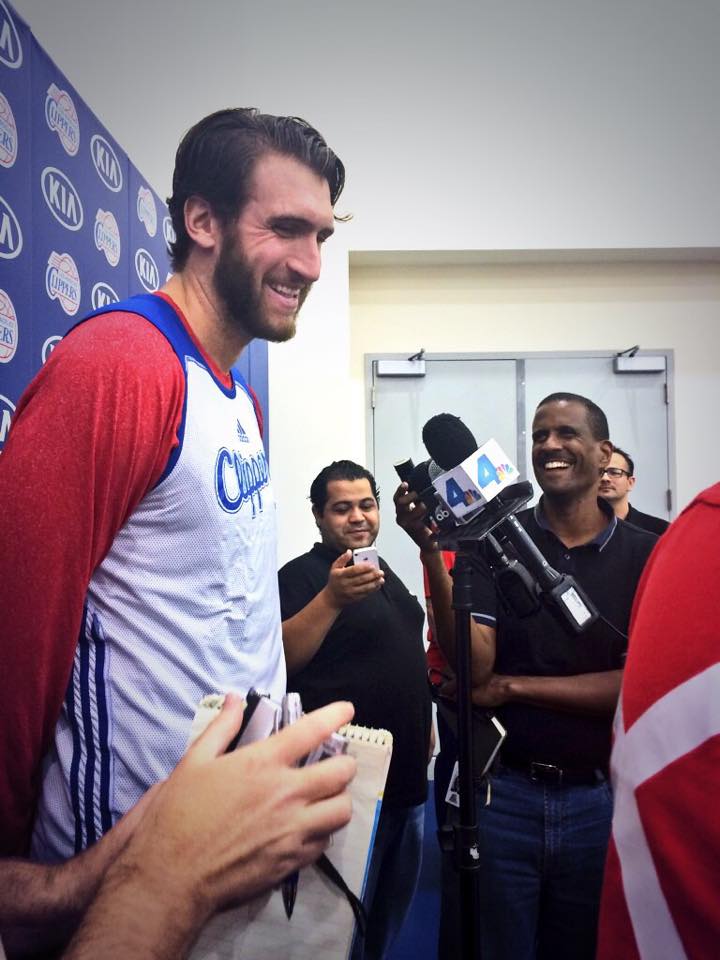 The Los Angeles Clippers shootaround was that of pure business Thursday morning in Vista Del Playa. Although media didn’t get a chance to visualize the demeanor of Doc Rivers, it seemed as though all players embodied his urgent and humorless stance on the beginning of this year’s journey to validation. The Clippers, while sharing a stage with one of the most successful franchises in league history, have commanded their own spotlight in the City of Angels; reawakening the fan base, seizing the energy shift and responding with a military-like mindset regarding the opportunity they’ve created and earned. One they will only be satisfied with when it’s no longer an opportunity, but a goal realized and seen through to its full fruition. That’s what’s most apparent in the conduct of any of the Los Angeles Clippers at present moment. It’s everything, or it’s nothing at all.

Sure, there were a few smiles and laughs emanating from the players that addressed the press, but there’s not much room for friendly banter when there is a perception of a void of respect. This team knows they must win a championship to attain this respect, respect they undoubtedly deserve. That’s why this season is critical, major and sobering.

Chris Paul spoke to the excitement of opening day, his age, and how after a 2-6 preseason that ended with the team being outrebounded in every contest, things were improving prior to their opener against a Kevin Durant-less Oklahoma City Thunder:
“Practice is practice,” said Paul when asked of the development in rebounding within recent days. “Need everything to translate to the real games.”

On the topic of the NBA All-Star Break and how the Clippers schedule may be the least beneficial because of how it’s structured with the recent change to the format, Paul said, “At the end of the day, we all got to play 82 games.”

And finally when presented with the tireless age question, and how it may or may not effect his ability to truly get after it this year, CP3 lays it out very plainly: “I don’t think my age has anything to do with seizing the moment. I think you just got to do it. It’s not about me, it’s about everyone on our team.” Draw curtain. Lights. Cut scene.

Following the brief, but commanding moments with Chris Paul, Spencer Hawes provided a lighter energy, an almost childlike air, as the opener for him signifies the most actualized road to an NBA title within the span of his professional career. On commenting his opening day routine and the intensity of that who spoke right before him, he still curbs this energy with the professionalism that’s come to be expected of this roster: “I think, after a while, you kind of just keep it the same. Once you figure it out, you just try and keep it consistent.”

Specifically on Paul, expectations of CP3’s intensity, even in a practice setting – hard fouls et cetera – “He’s always like that. When it’s in your nature, you don’t really turn it off.”

This last mention resonates with each and every NBA consumer, Chris Paul’s inherent ability to get it done. Will everything, it’s his choice. It’s their choice. The team’s will to win it all falls on them. This is the difference-maker, and while the season opener was an uphill battle fought against a bruised and battered Thunder team, a team that lost Russell Westbrook after just two points contributed on the night, they commanded the win. They made it a choice.

This self-imposed responsibility is probably the most remarkable aspect to the team’s collective consciousness at current juncture.

Shoot around media coverage concluded with a calm Jordan Farmar who mentioned the “sour taste” left after their defeat in the 2014 postseason, to the opponent they overcame last night in the Clippers first game. He mentioned it for merely a moment before returning to the mind set that will undoubtedly push this team over the edge if they sustain their health. It’s not just one game that matters, one series, one rivalry, it’s everything or nothing at all: “We have a big picture goal.”

Their message has never read this clear.

The Clippers defeated the Oklahoma City Thunder last night, 93-90. Chris Paul finished with 22 points, four rebounds, seven assists, three steals and one block; producing stats across the board and doing a lot of everything. “When it’s in your nature, you don’t really turn it off.”