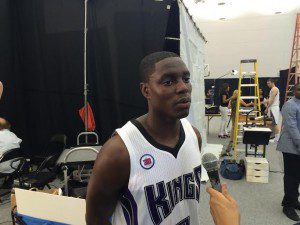 The Sacramento Kings are 4-1. It’s taken the NBA and the Western Conference by surprise, but not the team. Every player in a Kings jersey feels the continuity being built by Coach Mike Malone and his staff, who have taken a roster destined to remain a bottom-feeder and beaten four good teams in a row.

On Wednesday night, they did more than just beat the Denver Nuggets. They pummeled them.

It has been the Nuggets’ worst loss of the young 2014-15 season, but it diagnoses clear gaps nonetheless. The first quarter alone put them down 21 points to the Kings, as DeMarcus Cousins took advantage of his matchup with Timofey Mozgov to get himself to the free-throw line four times, while knocking down seven open looks in just the first 12 minutes of play.

From there, Sacramento did not let up.

Malone’s team did all the right things. Defensively, Kenneth Faried was held dormant, and was virtually useless as Darren Collison made sure to slash him on the block with help defense off his man. Arron Afflalo, one of the Nuggets’ most valuable pickups during the offseason, could not get any form of offense going as guard Ben McLemore‘s defense helped nullify any and all efforts from a usually productive guard.

McLemore had his best game of the season. In the first two seconds of the game, he came up with a steal. In the Kings’ first possession, he demanded the ball and slashed to the basket, hitting a turnaround jumper in Afflalo’s eye. He got himself to the free-throw line, and hit two three-pointers late in the game to finish with 10 points. He may have just broken double-digits, but this was a huge confidence-builder for McLemore on a more personal level than measurable offensive output. He was willing to call for passes, drive to the hoop, to initiate a fast break. All the passive tendencies we’ve seen from him were gone. He finished with seven rebounds and three assists to go along with his 10 points.

Once the lead was greater than 20 at halftime, this game was virtually over. The Kings got all the right production from all the right players. Cousins had 30, but shared the ball with Rudy Gay and Darren Collison. It didn’t matter who Brian Shaw threw at him to try and slow him down or at least diminish his impact on the game. Cousins got his and did so while shooting over 71 percent from the field. He was wildly efficient, while still making sure to not over-dominate the ball.

Gay had an effective game offensively, as his constant drives to the basket earned him five trips to the free-throw line, where he made eight of his foul shots. His mid-range jumper has been huge for the Kings in this four-game winning streak they’ve built, and shots that he usually forces in the face of tough defensive help have been substituted for open shots off screens set by Cousins.

The two played particularly well together against the Nuggets, as Gay made sure to either drill the jumper created from set screens or feed Cousins while he drove to the basket. The two have built chemistry, and its effects are very apparent on the court.

Arguably the biggest factor contributing to the Kings’ continuity and chemistry in the last week has been Darren Collison. Nobody surrounding the organization has any doubt that he is a definite upgrade over Isaiah Thomas. Collison is better defensively, as most fast breaks are spawned from his defensive efforts. He gets his teammates, primarily Cousins and Gay, involved offensively more frequently and willingly than did Thomas. Darren finished with 10 points and eight assists against the Nuggets, and his efforts were a primary factor in the win.

The Sacramento Kings are playing the best and smartest basketball we’ve seen from them in years. How they perform coming off this win and off the 4-1 record will dictate the direction of the season, but Mike Malone and his team have no doubt they can keep it going.