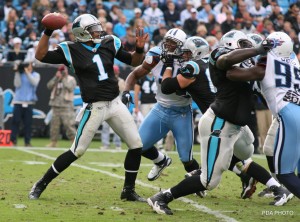 Winning in fantasy football is no easy task. I am currently on a six-game losing streak in the Baller Mind Frame league, which has brought me nothing but great shame and remorse for bragging about my 3-0 start. The good news is that I remain above the .500 mark in my picks against the spread after a 8-5 record in Week 9 on the NFL.

I’m not sure what happened to the San Diego Chargers last week. A 37-0 loss was shocking to fans in San Diego, as Ryan Tannehill played out of his mind. Phillip Rivers surely threw a temper tantrum in the locker room.

The same thing goes for the 4-4 San Francisco 49ers. Not only could they not cover the ten-point spread against the St. Louis Rams, but they lost the game after a Colin Kaepernick fumble at the goal line.

But last week is in the past. Week 10 finally brings with it a sense of playoff implications, especially for the 11 teams in the AFC with five wins.

Enough of the NBA analogies. This is football season, right?

There is another London game this week, which features the Dallas Cowboys taking on the Jacksonville Jaguars, in what is considered a home game for the Jags.

It is quite sad that the Jaguars are forced to play a game in London every year, just to avoid being blacked out in their home market, although it does provide those in England to see a subpar team that may eventually be based there.

Am I predicting the Jaguars will be the first NFL franchise in London? Yes, that is exactly what I am saying.

The Thursday night game is always a tricky one, but I have to go with the Cleveland Browns in this matchup. The Browns are 5-3 for the first time in forever, and they should be able to cover against the Cincinnati Bengals in Cincinnati.

Another tricky matchup is the Kansas City Chiefs against the Buffalo Bills; both teams are coming off of wins against the lowly New York Jets, as the Bills had a bye last week. While the Bills have been successful under Kyle Orton (a.k.a. Shane Falco), I have to go with ol’ reliable Alex Smith and the Chiefs in this game.

My lock of the week is the Pittsburgh Steelers against those aforementioned New York Jets. The Steelers are only 6.5-point favorites after a 43-23 domination of the Baltimore Ravens, and they will easily win by at least a touchdown over the Jets, who are in shambles.

My upset pick is the Carolina Panthers over the Philadelphia Eagles. The easy explanation is that Mark Sanchez is starting for the Eagles. The Panthers have struggled as of late, in a division that is desperately searching for a champion, but they should be able to handle the Eagles under the control of Marky Mark.

So much explanation but not enough time. To the picks!