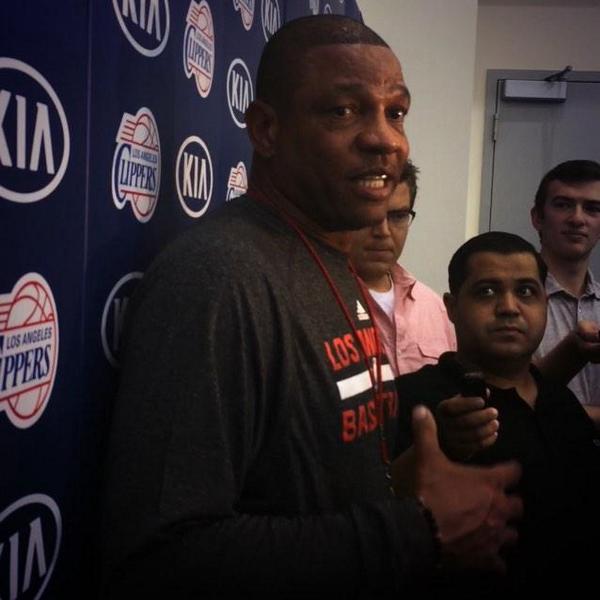 On Friday morning during practice, Doc Rivers‘ demeanor was much lighter than that of his Wednesday evening post game appearance, following a 104-121 loss to the Golden State Warriors. Although he remained firm in his belief that Golden State, at present juncture, is a far better ball club than the Clippers, while revisiting his worry over the lack of effort within the locker room. His analysis was gracious and authentic. He addressed many of the issues specifically related to game play including defensive effort, rebounding, and points in the paint, but what felt most poignant and unique was his mention of correcting the energy of the team: specifically tending to his roster as people and not simply pawns in a chess match. It’s easy to start thinking of professional athletes in this way, criticizing numbers, categories and production, but Doc has this distinctive ability to shift the analytical mindset back to that of understanding these issues as pertaining to a group of people, and not a bunch of fantasy robots.

One can imagine Rivers’ frustration regarding the play of his team thus far, sporting a 3-2 record that could easily be 1-4 due to lack of dominance in tight contests and ability to put games away, even when an early lead is fostered. There’s definitely a sense of uninspired exertion on the court that needs to be fixed, especially looking forward to a schedule that includes a hungry Portland Trail Blazers team, the title defending San Antonio Spurs, and the Chicago Bulls. Rose-less or not, they compete.

Doc is no stranger to the issues surrounding, and takes no caution is mentioning specifics, what’s different is that he speaks about his team with a passion for the actual life of it, a quality that isn’t always present in multi-million dollar, professional sports endeavors.

“Is it a trust thing?” Rivers was asked during shoot around as the media attempted to obtain a black and white answer for the problems being experienced on the court. Doc quickly retorted that it was simply an effort thing. “Focus and effort.” Although uncomplicated in analysis, the assessment is dead on and easy to spot when watching Clippers basketball as of late: poor rebounding efforts and sloppy shooting which translates heavily on the defensive side, and becomes the obvious antithesis of production.

“There’s a reason why we’re not playing as hard as we should.” I don’t know the reason. And as a coach, I want to find out.”

This particular comment prompted the immediate-fix-inquiries even further; the why, who and what’s to blame questions, and there’s just something to be said for the way that Doc changed the tone of the conversation with his replies. Instead of giving the statistical deficiency and finger pointing responses, he just kept reminding us all that we were dealing with people and not puppets.

When finally asked to remark on the blatant differences in quality of play albeit the same roster make up as that of last year, one can easily understand why Doc Rivers is celebrated for being the elite coach.

“We deal with people, you know, we don’t deal with X and O’s, we actually deal with human people, that have human stuff going on in their life, and you just got to figure it all out. Its just part of it. It’s what, in a crazy way, is part of the joy of my job. And it’s the same part of my job that drives me nuts. It’s part of my job.”

Though the Clippers have much to do in improving their technical play on the court, there’s one factor they possess that will always give them a slight edge in competing for a title, and that’s simply their head coach. His ability to actually care about the people underneath the jerseys, on and off the court, is the key ingredient of this team’s core. It’s the human factor, and it should never be discounted or overlooked, as it promotes true champions that can manifest real, sustainable success. An ode to Coach Rivers, and his continued legacy as one of the league’s most treasured and powerful presences. And a big cheers to Doc for keeping it all about the people and all the way real.