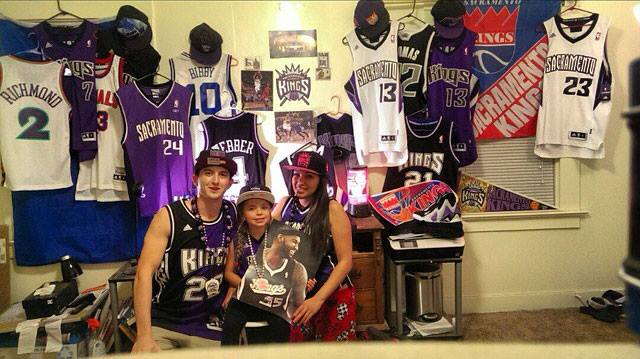 I had been living in the Dallas/Fort Worth area for only few months when I became close friends with a hardcore Dallas Mavericks fan, a young man who lived and breathed his hometown team and wasn’t afraid to wear his passion on his sleeve for the world to see. Upon finding that out I’m a sports writer, people tend to begrudgingly ask which teams I tend to root for or follow closely, so it was only natural that one of the very first questions my friend asked was which basketball team I was a fan of. Knowing that I had been covering the Mavericks for only a single month during that time, he was surprised at my nonchalant answer, an answer I had given since I was old enough to speak, an answer that was spoken with a completely non-apologetic tone: The Sacramento Kings.

His response was classic: “Jesus Christ, you fans still exist?”

The light mirthfulness of his remark caught my attention – he wasn’t attempting to be impudent, he was genuinely intrigued and looked at me as if I was a rare albino tiger who spewed multicolored jewels and shot laser rainbows from my ass. I was half excepting him to graze my nose with his fingertip just to make sure I was real. This was spoken during a time last year when the Kings were arriving at the tail end of yet another disappointing season, something that occurred for the better part of a decade, so he was curious about why I would so openly admit this in a public venue, especially since my primary focus for work was a rival team in the Western Conference.

The city of Sacramento rests beneath the emerald shade of a heap of somnolent trees, nestled between the snowcapped mountains of Lake Tahoe and the silvery fog of San Francisco, and is often overlooked due to the overwhelming ingenious appeal of her sister cities (“You mean Los Angeles isn’t the capital of California??” Yeah, f**k you – never ask me that). The usual dilemma of Sacramento’s outlining suburban towns is often that each and every house look too much alike – her upper middle class stations are simply a cluster of sanctums that all are the mirrored images of one another (if you happen to be from Roseville, Antelope, or Folsom, you’d understand). Despite the urbane junction of punctilious twin real estate property, this was home. From the moment of conception, those who were born and bred in the Sacramento area are reminded of one thing and one thing only: You bleed purple and black. Why? Because, in the best way possible, you have absolutely no goddamn choice.

Since covering the Mavericks, I’ve taken a keen interest in their specific brand of team chemistry. I watch closely their particular actions and gestures to one another during practices and shoot arounds. Their silly banter. Their extreme camaraderie. Their respect for those surrounding them. Their love for their fans. All combined with a front office that has a heart of pure gold, the Mavericks come out swinging during every single game and are more powerful because the team flow is so very strong. Take notice to the one thing all champion teams have in common: chemistry. The San Francisco Giants are a recent example of a winning team whose positive energy in the clubhouse transcended on to the field. In 2010 they were lovingly labeled “misfits” who happened to find each other in the port of a storm before actually turning into the storm itself once they banded together. What won them their first World Series Championship that year? Chemistry. What did again in 2012? Chemistry. And finally in 2014? Don’t make me say the obvious. The San Antonio Spurs had it in their 2014 Championship. The Miami Heat the year before. The Dallas Mavericks had it in 2011 and have it again this year and are busy proving it on the court.

And the team from a city no one remembers? With one simple gesture, both the internet and the sports world were set on fire.

A DeMarcus Cousins’ headband adjustment from teammate Omri Casspi followed by a bromance fist bump during their game against the Denver Nuggets was all it took for naysayers to stand up and take notice to that 4-1 team (who are now 5-1). It was a subtle move that true Sacramento fans haven’t witnessed during all these brutal years in between the chemical explosion that was the 2001-2002 Kings. Starters Chris Webber, Mike Bibby, Peja Stojakovic, Doug Christie, and Vlade Divac had an impressive and powerful chemistry that was both admired and managed to stir jealously within the league. Fans could feel it in the stands, and even from the projected images on a television screen. And for the first time since that specific team, Sacramento feels something that we haven’t felt in a very long time. Hope.

When I say we have no choice but to fall at the feet of our team, good or bad, I mean it’s because we have literally nothing else. Unlike the city by the bay, or the city of angels, the Kings are all we have. We will probably never have the luxury of ever having our own football team or a Major League baseball team, which is why we fought so damn hard to keep them in our city. And we won. We have waited patiently for this familiar feeling to creep back into our blood stream after years of loudly cheering in the dark. Even during the hardest years, we were the steadiest of supporters and not ashamed to say so.

Take note, commentators who suffer from a serious lack of vision. We Sacramento fans have always been vocal about our team, we’ve just been ignored. You’re now suddenly starting to see us because we’re finally turning heads.

Win or lose, we’ve been here the entire time, and now it’s time to take notice.