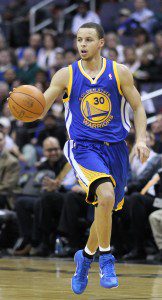 Basketball can be a fun, and enjoyable sport to many players and fans alike. Sometimes, it can be a cruel, unforgiving entity as well. Lat night those words held true as the Orlando Magic, nearly seconds away from ending the Golden State Warrior’s nine-game winning streak, found themselves on the losing end of it all thanks to a last-second three pointer by none other than Stephen Curry.

Orlando entered the game without their leading scorer and rebounder in Nikola Vucevic, who was ruled out due to back spasms during shootaround.  The Magic kept pace with one of the league’s top teams in the first quarter, leading the Golden State Warriors 25-24 before things began to slip in the second quarter.

Midway through the second, the Magic led 42-38, but no lead is ever safe when facing the Splash Brothers. The Dubs went on an 11 point surge and closed the first half on an 18-4 run to lead the Magic 56-46. However, Orlando flipped the script coming out of intermission, playing a spectacular third quarter. Moving the ball with crisp precision, hitting 12-of-26 shots, with eight of those coming via assist, the Magic went on to outscore the Warriors 29-17 to take a 75-73 lead heading into the fourth.

Fast forward to the score tied at 95-all in the fourth,  Stephen Curry and Klay Thompson had a chance to take the lead, but missed three straight three-point trys before the Magic secured the ball and called a timeout with 47.9 seconds left in the game. After Elfrid Payton found Tobias Harris for a tough basket, and Andrew Bogut lost the ball on a lob, the Magic managed to milk the clock. Unfortunately, Payton would miss a would be dagger layup, and the ball found itself in Curry’s hands.

With just a few seconds left, Warriors head coach, Steve Kerr opted not to call a timeout and to leave the game in Curry’s hands. Curry delivered, draining a huge three with just 2.2 seconds left.  The Warriors avoided the Magic’s upset bid, winning 98-97.

Victor Oladipo led the Magic with a game-high 27 points. Kyle O’Quinn starting in place of Nikola Vucevic put up a double-double of 21 points and 11 rebounds. Tobias Harris had 17 points and a season-high five assists. Evan Fournier finished with 10 points.

For the Warriors, Stephen Curry and Klay Thompson combined to score 42 points. Harrison Barnes tallied 14 points and 12 rebounds. Marreese Speights had 12 points in 15 minutes off the bench. Draymond Green had 11 points, 6 assists, and 7 rebounds.