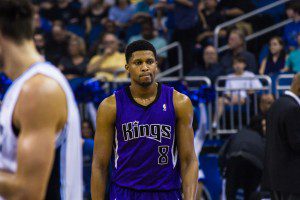 The Sacramento Kings continue to stall out in a crucial home stand after early-season success that drew them national attention.

The team came home to face the Memphis Grizzlies Sunday, and gave away the game in the absence of DeMarcus Cousins‘ inside presence. Although Michael Malone found solace in the play of Reggie Evans, his absent center left too big a hole to pull out a win.

On Tuesday night against the Toronto Raptors, more of the same took place in a 117-109 Sacramento loss, in what will end up being the most important home stand of the season. It’s the time period, the team believes, that must be utilized to prove legitimacy; to validate past success, and set up a future string of good fortune.

Toronto entered the game atop the Eastern Conference, boasting one of the league’s best records on the back of excellent guard play. In Tuesday’s game against the Kings, Greivis Vasquez started in the place of DeMar DeRozan, who’s been sidelined with a groin injury.

Toronto’s backcourt easily outplayed Sacramento’s, even with Ben McLemore‘s impressive offensive performance. Kyle Lowry continued to prove why he should be considered one of the league’s elite point guards, as his ability to create shots for himself without the use of screens proved to be too much for Ramon Sessions, who played big minutes. Lowry gave his teammates wide open looks at three-pointers, which killed the Kings in the first half, and finished with 27 points and 13 assists.

In the third quarter, Sacramento’s bench provided production where the team needed it most, as it’s done relatively effectively all year. Derrick Williams had an energetic performance, and his play after halftime allowed the Kings to take the lead before the Raptors took it right back. Omri Casspi, too, had his usual dynamic performance, and his drives to the basket were the most aggressive aspect of the team’s offense all game.

Malone decided to play Sessions for 29 minutes and left Darren Collison in for only 18, and much of Sessions’ time came in the fourth and final period, which proved questionable. Sessions missed a number of key shots in crunch time, an area of the game that usually spawns a Collison takeover.

The team missed Collison’s ability to create his own shot and had to rely on Gay and Sessions, which wasn’t an effective option against Toronto’s sound defense. Collison typically utilizes screens from Evans that could have broken pressure from Lowry, opening up the mid-range jumper that we’ve grown accustomed to seeing. This offensive aspect was lost with him on the bench, which could have made the difference.

Sacramento will stay local for three more games on this central home stand. Cousins may play against the Indiana Pacers on Friday night, and the Kings need him to if they’re going to salvage the rest of the stand.