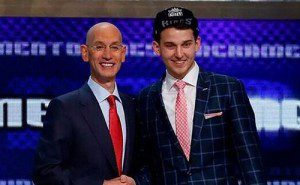 For every bit as poor as the Sacramento Kings’ offense was, the Utah Jazz’s offense was equally poor. No matter how many rotations the Kings blew or shooters they failed to close out on, the Jazz’s ability to finish offensive possessions kept them playing from behind for much of the game.

The Jazz fired off 17 three-point shots in this matchup, but only managed to hit three of them. They consistently got wide open looks for Gordon Hayward from beyond the arc, but he made only one on seven attempts from deep. For most of the second half, Utah’s possessions ended with a shooter firing off a quality look, but struggles from long-range allowed the Kings to push the ball in transition regardless of how poorly their defense played.

Sacramento’s defense was unable to fight through screens and keep bodies on guards for a majority of the night as Nik Stauskas played 30 minutes and displayed his low defensive capabilities. The screens set by Utah bigs along the baseline and on simple high screens pinned Stauskas down for long enough for guards to take open shots. The Kings, however, were again fortunate as Dante Exum and Trey Burke combined for only 15 points.

Stauskas earned his minutes with his best offensive performance of the season. He’s struggled shooting the ball, and even started this game with back-to-back misses on jump shots that weren’t even close. When he waited for open looks from beyond the arch and mid-range, however, he was able to capitalize on what appears to be a very capable set of offensive ability. He used Jason Thompson to step over him and force Exum to get caught on the screen, and has shown that he is an effective player when he is patient and waits for defenses to dictate his play.

Nik Stauskas finished with 15 points on 12 attempts from the field. He also added eight rebounds, with two of them coming on the offensive glass.

As they’ve done throughout the entire span of DeMarcus Cousins‘ absence, the Kings gave Rudy Gay creative control over what shots would be taken down the stretch as the Jazz inched to within five points. Gay utilized mishandles from Enes Kanter and Gordon Hayward to create transition opportunities, and hit his mid-range jumper over the opposition.

Gay finished with 29 points, six rebounds, and three steals. His 10 trips through the free-throw line are indicative of how well Sacramento’s offense functions when he takes the ball to the hoop, rather than stopping to shoot his jump-shot.

The Kings had more life from the bench and starters in this game, and it was aided by a number of key plays. Both Ben McLemore and Rudy Gay had violent blocks on Jazz players, which earned them responses from Carl Landry and Ryan Hollins, whose energy has boosted the team all year.

Sacramento finished the game by hitting their free-throws and shutting out Utah defensively.

The Kings head to Los Angeles to face the Kobes to finish the back-to-back.