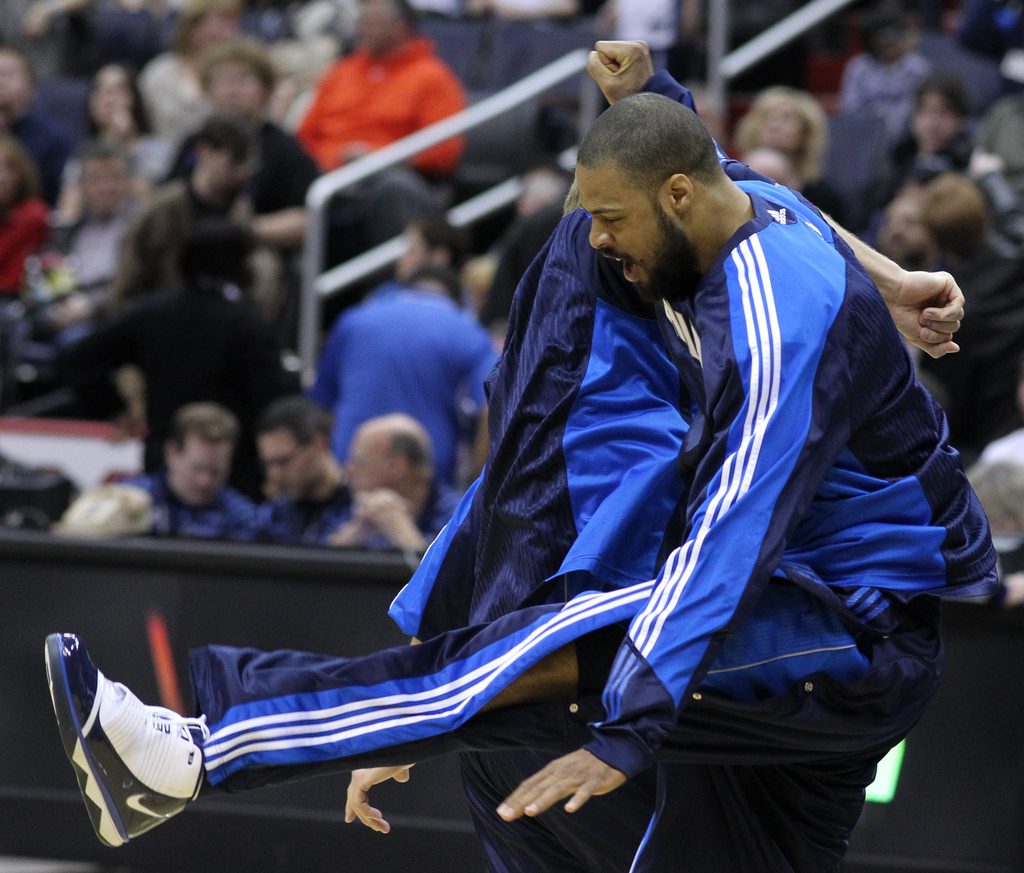 The Dallas Mavericks’ locker room was surprisingly sparse of life following their discouraging 105-98 loss to the impenetrable Golden State Warriors. Jameer Nelson muddled about with his aching shoulder firmly wrapped, Brandan Wright quickly dressed, Monta Ellis sat quietly in front of his locker, toweling off. All that appeared to be alive was the hushed tones of the Mavericks media as they gathered around one specific locker, waiting for its owner to begrudgingly appear. As they waited, Ellis, in his usual soft spoken tone, gave his thoughts on the game, Devin Harris smoothly breezed in and out, stopping only briefly to chat up with a few staggering reporters, and Chandler Parsons (who was inactive and not suited up for the game) crossed the room silently and disappeared into the weight room. But the man of the hour had yet to emerge from the showers, so the waiting lingered on.

During the third quarter of the game, Marreese Speights lost his shoe as he dashed across the court, his exposed sock now turning into a mop for the sweat that fell from the players’ bodies. The shoe was quickly tossed midcourt in order to remove it as a hazardous obstacle for bounding players as the play continued without a hitch. Then, Stephen Curry, in an attempt to be a helpful teammate, grabbed the shoe and tried to toss it toward Speights.

But Tyson Chandler wasn’t about to have any of that.

Not only did the fans in the American Airlines Center erupt in roars of approval, but Twitter seemed to cave under the weight of Shoegate. 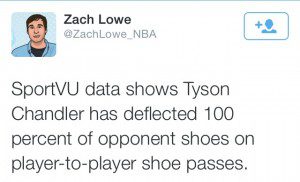 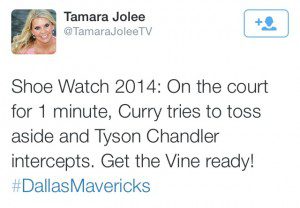 Chandler smirked after the game. “You can’t run with a sock on.”

For a few seconds in time, as the Mavericks struggled to find their groove within that run while feeding off the energy of the crowd, the first 24 minutes of the game were forgotten. Especially those fatal first 12 minutes, where the Mavericks, who are the best in the league offensively, seemed to implode right out of the gate. “We gave up 39 points in the first quarter,” Ellis quietly stated after the game. “They’re a great team. They’ve been playing awesome the whole season. That was the game though, in the first quarter. We’ve got to do better than that.”

Following Shoe Storm ’14, the Mavs attempted to spark, especially during the final five minutes of the game when Wright came back into the game and almost single-handedly brought Dallas back from the brink of death by tacking on seven points to bring them within eight points with two minutes left on the clock. Unfortunately, it wasn’t enough to save the Mavericks, and the Warriors ended up walking away with their fifteenth straight win.

“It (winning 15 straight) feels great,” Dubs guard Klay Thompson said to the press following the win. “We didn’t really expect it but it’s just a testament to our ability to play on both sides of the ball.”

Richard Jefferson replaced an ailing Chandler Parsons, who sat on the sidelines watching his team struggle, but not Jefferson, who, despite the loss, was impressive. “I love Jefferson,” Mavs coach Rick Carlisle expressed. “He plays with as much force as anybody on our team that’s why he’s a very valuable guy on our roster.”

Once Tyson finally walked into the locker room to the open microphones of the awaiting media, the hovering damp mood refused to lift, even with Chandler’s facetious tone regarding the shoe incident. The Mavericks are 0-8 when facing the top teams in the Western Conference and need to do some heavy tweaking before the start of the playoffs come April of 2015.

Mavericks head to New York to face the Knicks at Madison Square Garden on Tuesday evening.