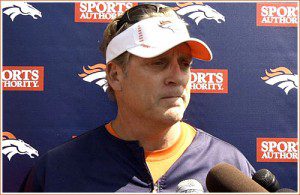 It was announced on January 14th that the new head coach of the Oakland Raiders is Jack Del Rio. Del Rio was most recently the defensive coordinator for the Denver Broncos, and before that was the head coach of the Jacksonville Jaguars. Del Rio also filled in as the interim head coach for the Broncos when John Fox had a medical issue last season. The Raiders opted for a coach with a proven history in the NFL, rather than promoting a coordinator or snatching someone from the NCAA. The move was done to try and bring some reliability and consistency to a position that has seen more movement than a marry-go-round. The numbers suggest that Del Rio is an average coach at best. In his tenure with the Jaguars he finished with a record of 68 – 71, getting to the playoffs twice and winning one postseason game. The Jaguars were a project team to be sure, but the same thing can be said about the Raiders. Del Rio has surely gained knowledge from his first stint as a head coach in the NFL. Coordinating with John Fox could give Del Rio some new perspective on what sorts of things work for a team and which don’t. However, Del Rio brings something with him to Oakland far more valuable than experience or wisdom. Jack brings to Oakland a wealth of personal connections. Del Rio coached the Broncos for four games (posting a 3 – 1 mark) while John Fox recovered from heart surgery. 18 players from the current Denver roster are available as free agents. It’s important to know if those players enjoyed playing for Jack in Denver and are more likely to try out sunny Oakland. Of those 18 players, only two are older than 30, and five of them are players who have seen time in the Pro Bowl. Jack may even be willing to pay a little bit more for a player that understands his systems. Safety Rahim Moore is the most likely to board ship with the Raiders, but I expect to see offers extended to a number of these players from Jack. There are expectations in Oakland unlike the Jaguars. Raiders fans aren’t crazy enough to think their team is going to with the Super Bowl next year, but they are crazy enough to expect to need both hands to count the number of wins they had. The Raiders have some good, young talent, but the real problem is the division. The Kansas City Chiefs are a dramatically improved squad since Andy Reid came to town, and I see them getting better as players gain a better understanding of the system. The San Diego Chargers have always had a dynamic offense that keeps them competitive every year. As Philip Rivers is under center, the team will prove to be a difficult opponent for anyone. I shouldn’t have to explain why the Denver Broncos are a powerhouse again. While this is not even 40 percent of the schedule it is the 40 percent you have to be the most worried about. Tiebreaks are so important and many of those come down to divisional and conference play. I personally like Jack Del Rio as a coach. He always preached hard-nosed football with accountability, and, particularly with a young team, I think that is the sort of leadership that is required. The Raiders certainly could have done worse which would have been a very “Raider” thing to do. The team needs a consistent coach for the next few years so that management can evaluate just what sort of team they have, and what sort of team they need to be competitive in the AFC West. This may require some patience and growing pains. Raiders fans, please be accepting of using no more than one hand to count your wins for the foreseeable future.