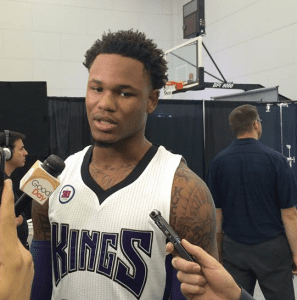 When a highly talented college basketball player enters the NBA draft, comparisons are immediately drawn between his game and that of a previous player. Some comparisons bring with them vast expectation, some bring much less, but all serve the same purpose: to predict the future of the sport by studying its past.

Some things are easy to guess at in basketball, such as the leap a player makes between his first and second year in the association. Damian Lillard and Anthony Davis are two players who commanded a great deal of attention throughout their rookie years and made an immediate step to superstardom in the second, as so many players have done throughout history.

It’s a consistent pattern in basketball. After being uncomfortable rookies in demanding environments, the next season brings familiarity, and with it, better play.

Such is the case with Ben McLemore. The Sacramento Kings’ first-round pick’s rookie year brought poor shooting and errors in judgement, but had flashes of an ultra-talented shooter with room to grow.

For the first time in his young career, he has been granted recognition on a somewhat national level. His growth as an offensive and defensive player has put him next to Jimmy Butler as a serious candidate for the league’s most improved player, an award that actually means something in basketball.

McLemore is well shy of a polished shooting guard (especially by Western Conference standards), but has given the Sacramento Kings a complete turnaround in his ability to fit within a system.

He didn’t feel comfortable in his rookie season. It was a bigger matter than not yet knowing the playbook or his teammates; McLemore wasn’t executing on either side of the ball, and he looked lost.

In 2014-15, his main priority above all else has been to keep himself content with the way he’s playing. For him, he says, building his own confidence spawns better play.

“I have to keep my confidence at a high level. Right now, it’s at a higher level than last year, I can tell you that,” said McLemore.

So what is he doing better? McLemore has utilized the half-court effectiveness of DeMarcus Cousins as a means of knocking down his own three-pointers. Most defenses send double-teams to Cousins immediately, and help has often come from McLemore’s defender.

Where the opposition could afford to leave him wide open for shots last year, his ability to shoot the ball from long and especially mid-range has improved. Defenses can either double team and leave the shooter free, or let Cousins work one-on-one for half-court offensive efficiency. In either situation, Sacramento has a huge chance of scoring.

In this scenario, McLemore’s defender moves to double Cousins, leaving him with the clear decision to kick the ball back out to the open shooter. McLemore can choose to either pull the trigger or drive to the basket. 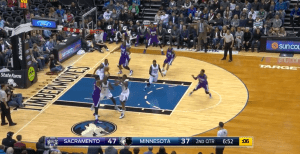 In situations like these, McLemore has made use of his tricky ball fake to take a step in and open up his mid-range jumper.

He shoots 55.5 percent from two-point range. For a 2-guard who shoots a high volume of jumpers, this statistic means that McLemore can effectively use his ball fake and take pull-up jumpers as efficiently as anyone in the league. Kobe Bryant has never shot at this high of a clip from two-point range, and even considering his shooting volume, that is still wildly impressive.

In 2013-14, McLemore had trouble in transition, often mishandling the ball right before the finish and consistently blowing easy dunks. Now, he utilizes his athletic ability well in the open floor.

“I get going early, and then [I know that] throughout the course of the game I’m going to get my looks,” says McLemore.

In some matchups, Sacramento’s shooting guard doesn’t shoot a jumper before taking an easy transition layup or dunk. He understands that he can’t limit himself to being a catch-and-shoot player with the length and defensive ability he has.

This understanding has brought out of him more drives to the basket and a willingness to attack opposing guards near the hoop, perhaps the most influential aspect of his growth as a player. He is shooting 46.3 percent from the field this season while only going 37.6 percent in his rookie year. The monumental increase is a direct result of his aggression in transition and half-court offenses.

McLemore credits his increased offense to his more aggressive approach. He attacks his defenders rather than attempting fadeaway jumpers. In other words, he knows when to shoot the basketball, and it has led to him doing so efficiently.

He also understands the life of a shooter. With all the categorizations being dealt to NBA players, McLemore recognizes that he’s a jump shooter before anything, even when he’s struggling.

“If I go in a shooting drought, I just have to keep shooting the ball and keep that confidence. I have to be aggressive,” he says.

This seems elementary, but the opposite is true in McLemore’s case. Last season, he would not have given an answer so centered around staying consistent. He was a fair-weather shooter, always looking for the perfect opportunity to present itself, fearful of the probability of a miss.

Sacramento has used him as a primary defender on point guards who overpower Darren Collison. McLemore has had the responsibility of guarding Russell Westbrook, and has seen all-NBA talent in Klay Thompson and Manu Ginobli.

His intangibles are what made him such a high lottery pick originally and have just begun sprouting a defensive sense. He is learning more and more the life of an NBA guard, one that involves fighting through screens set by seven-footers and understanding the shooters he guards.

He has been better than ever as of late in these aspects. He can switch effectively and is strong enough to fight through screens, while still having plenty of room for growth as far as physical strength is concerned.

Here is an example: McLemore (bottom left) fights through a down-screen set by Kenneth Faried, which is meant to pin him to the baseline and free Arron Afflalo for a three-pointer. He would not have recognized this action last season; his improved defensive ability allows him to stop open shots that could have been. Afflalo is forced to pass the ball along to his point guard, and Sacramento avoids leaving a good shooter wide open.

McLemore plays a position at which the Kings lack depth. He hasn’t had an abundance of competition for playing time and has always been expected to play big minutes on a nightly basis.

For the most part, he has responded to the organization’s quest for productivity for one of its worst positions. While it has earned him consideration for most improved player, McLemore still has improvements to make on both ends of the floor before he can be considered a league-wide asset.

Sacramento hasn’t expressed recent plans to make him a trade piece, a sign that they expect continuous growth from their young shooting guard.