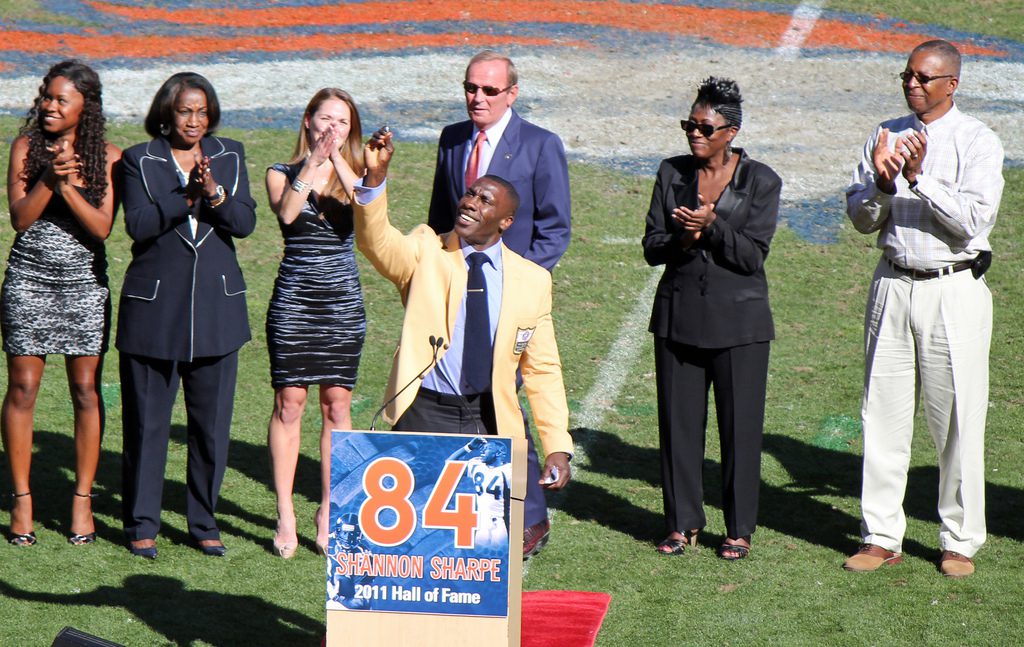 The NFL will hold a combine for veteran free agents in March 0f 2015. Here is a list of 10 players that are still technically free agents that I’d like to see lace up for the NFL Veteran Combine.

10. Terrell Owens – Owens is now 41 and played a spectacular 16 seasons in the NFL. Often mired by his large personality and larger mouth, Owens recently claimed he could still post 1,000 yards were he playing today. Mr. Owens, here is your chance to prove it.

9. Larry Allen – Allen is still a beast of a human being, and when he left the NFL he still participated in weight lifting competitions. Larry is 43, but I have to imagine he’s still stronger than most farm animals. I don’t need him to do anything but the bench press. As a guy who’s bench pressed 700lbs, how many reps at 225lbs do you think he could do?

8. Michael Strahan – Strahan played a very solid 14 seasons, and currently works in various forms of television. He is a character who loves life, but the combination of size, speed and strength allowed him to be among the lead leaders in sacks for virtually his entire career. Even at 43, I’d still love to see what he could do in many of the combine drills.

7. Shannon Sharpe – Sharpe was the original wide receiver playing tight end in the NFL. He was not a great blocker, but ran faster and had better hands than most wide receivers. I would still be curious as to how fast he could move at 46, and for the sake of entertainment I’d want to see him in the blocking drills too.

6. Barry Sanders – Unlike many of the other running backs in the history of the NFL, Sanders retired in his prime, without the long-term wear-and-tear that comes with a prolonged career in the NFL. Argued by many to be the best running back in history, Sanders made elite speed look slow. While 46 isn’t exactly young, it would be amazing to see him run again.

5. Warren Sapp – When Sapp spoke about his retirement from the Oakland Raiders he mentioned that he didn’t feel motivated to continue playing football. As a competitor, that is enough to make you walk away, but like Sanders, this means that Sapp doesn’t have the traditional wear-and-tear of most grizzled veterans. At 42-years-old, it would definitely be interesting to see what Sapp has left in the tank. He did challenge Charles Barkley to a foot race a few years ago, if we could make that happen Sapp jumps to the top of my list.

4. Tony Gonzalez – Reports have been released that at least two teams asked Tony Gonzalez to come back and play this past year in the NFL. When Tony retired he was still putting up impressive numbers. Even at 38, Tony could likely still be a starter on many teams in the league.

3. Ray Lewis – “I’m a machine jerk!” I just love that Ray Lewis sound bite. Lewis stepped away after winning his second Super Bowl with the Baltimore Ravens. In watching his episode on “A Football Life”, Ray comments on how working out is how he relaxes. Despite the physical pounding his body took Ray appears to be a young 39. I imagine his stats from a combine now might blow some peoples socks off.

2. Deion Sanders – How many of you saw the “Leon Sandcastle” commercials? Well, here is a real chance for Deion work his way back into the NFL by putting up ridiculous combine numbers. The commercial claims a 4.3 second 40-yard dash. I doubt that a 47-year-old Sanders has that left in him, but I would be curious to see how one of the fastest players the has game ever seen would perform.

1. Jerry Rice – Rice is the all-time leader in all receiving stats and he did accomplished that by for playing 20 years at an elite level. Rice is a consummate athlete, and has kept his body in great shape, even now at 52. I wouldn’t have any hopes for the bench press, or really many of the drills. But I would pay money to watch Jerry go out and run routes and catch passes one more time. Maybe we could even get Joe Montana to be the one throwing the ball to him for old times’ sake?