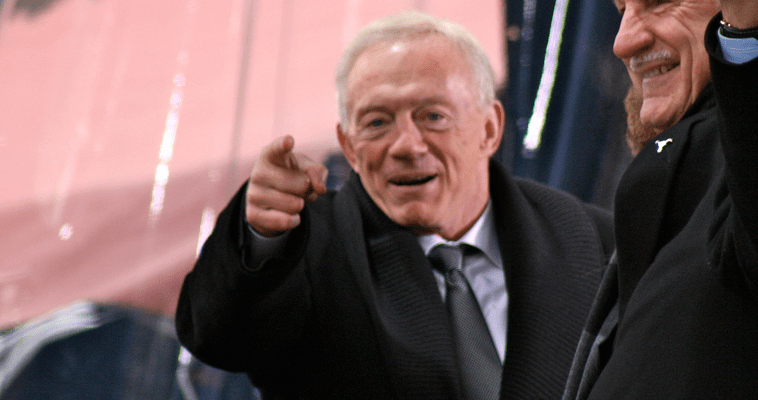 Every year my buddy Ben and I talk football when the Super Bowl is long since over. We talk about the schedule ahead, the free agent market, the draft, and all things that revolve around our teams. One thing we always kid with one another about is the amazingly ridiculous things that must be said inside the front offices of teams, in meetings between coaches, GM’s, and owners. We often take haphazard guesses at such conversations. Here is one such conversation  Jerry Jones and Jason Garrett of the Dallas Cowboys.

Jerry Jones (JJ) – Hi Jason, thanks for meeting with me today. Come in, close the gold plated door adorned with jewels and the bones of those that have opposed me and take a seat.

Jason Garrett (JG) – Thanks Jerry. We sure did have a good season this year. I understand you’ve offered DeMarco Murray a four-year $16 million dollar contract and he’s turned it down. I guess we’ll need to find a new running back.

JJ – No, I mean it’s too bad that you didn’t run the ball on fourth and one to try and pick up the first down. If we’d been in the Super Bowl we wouldn’t be having this conversation right now and Murray would have likely been injured in the playoffs at some point, allowing teams the chance to second guess his durability and us to get him a steal.

JG – Sir, I did call a run play, and Tony Romo audibled out of it when he saw a stacked box. I trust in his judgement, and we were a bad call away from winning that game. But, if you’re questioning my play calling and leadership why did I get a lengthy extension? Also, did I hear that you were banking on an injury to get Murray back at a discount?

JJ – Whoa, whoa, one at a time Red. I like Tony, but when you call a play in that sort of situation the boy has to trust in his line and his back. If he can’t, maybe we can get them to do some trust exercise “kumbaya” shit out in the woods. You got a contract extension because after Jim Harbaugh took the job at Michigan you were the best coach left. Rex Ryan was crossed off the list because he likes the taste of “de feat”. Get it?

JJ – As far as DeMarco, yes, of course I was banking on an injury. I could have signed him last year for pittance and he’d have been happy with it. All of a sudden he’s the best back in the league and he wants to be paid like it?! This guy needs to remember that it’s a team game, and I own the team.

JG – Sir, with all due respect, he was an integral part of our team this year. I’m not sure we can draft or sign anyone in free agency that will be as consistent or as good. I do understand the money issue, so whom did you have in mind?

JJ- Whom?! You really did go to Princeton, didn’t you? Adrian Peterson will be our running back next season.

JG – Peterson?! He’s still under contract with the Vikings. He’s straight off a child abuse case. He’s a great runner, but I’m not sure he’s the right fit for our club.

JJ – I’ve spoken with the Vikings and we can get Peterson for exactly what we gave up in the Herschel Walker trade a few decades ago.

JG – Sir, that is widely considered to be one of the lopsided trades in NFL history. The trade allowed you and Jimmy Johnson to build a dynasty and the Vikings fell apart just a year later.

JJ – Yeah, but this is different.

JJ – Because history never repeats itself.

JG – (mutter to himself) Why did I ever take this job?