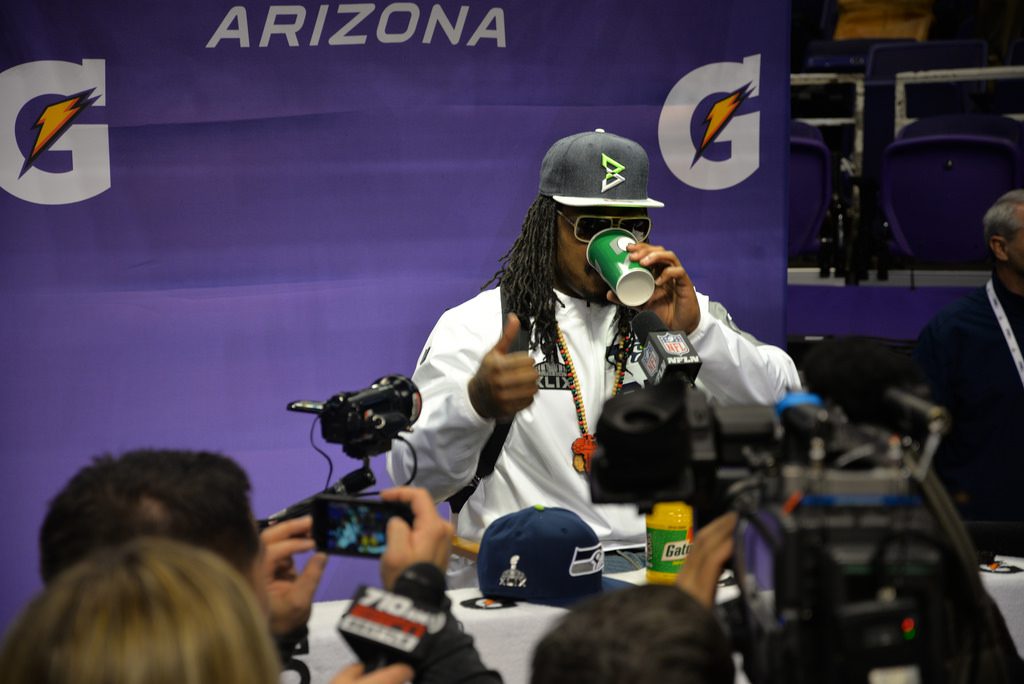 Granted, many of those were the same word said over and over, but 50 nonetheless. That’s how many it took Marshawn Lynch to send a message to the NFL that most would only need two words to accomplish.

At Super Bowl Media Day this week, Marshawn Lynch followed up that infamous post-game performance with another gem. For about five minutes, all he told reporters was, “I’m here so I don’t get fined.”

Between the beef Lynch has with the media, and the NFL’s typical, arbitrary, authoritarian response, he’s been muzzled. It hasn’t bothered the Seattle Seahawks any. They’ve backed their star running back and won games left and right. With Lynch’s silence, though, we’re the one’s who’ve lost.

He’s one of the most fun and likeable athletes in sports, though you wouldn’t know it looking back over his post-game interviews this season. Lucky for us, though, Lynch has a treasure trove of YouTube clips to his name. Here’s the best that the NFL’s best personality has to offer.

A personal favorite of mine. Any Madden vet has to agree with Lynch: Simeon Rice‘s speed and rip move was a deadly combo. RIP Gaines Adams.

Marshawn is Hyphy personified, and perhaps no other clip embodies that better than the one where he goes dumb at the sideshow (aka the Cal-Washington game) in full pads.

A friendship is born. Who else would pay money to see a Marshawn Lynch-Justin Smith buddy comedy?

Get Off Me, Child’s Play

Here’s the Earthquake Game revisited by the same man that brought you the brilliant Greg Jennings video.

“You just won the Super Bowl, Marshawn. What are you gonna do next?”

You think he’s good at football? You don’t want to see Marshawn on the playground.

Shopping for a Grill

Skittles, the Common Cure to the Upset Stomach

“Words to Live By” by Marshawn Lynch.

Add your favorites to the list in the comments below.