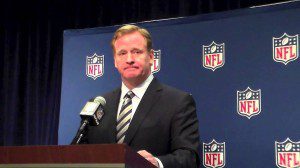 It’s the second Friday the 13th in two months and Roger Goodell only wished Jason would show up and end all the misery.

Malcolm. Butler. That name still haunts Roger as he thinks about what could have been avoided. Everything was about to be all right until Pete Carroll approved the history-changing call.

Roger had visited Capitol Hill before but never in a mandatory sentence. The grand jury had become a must once Mr. Kraft made his statement. Knowledge of cheating was a impeachable offense and Mr. Kraft made it very clear in his words.

“The NFL is a place for men with integrity. My former friend, Mr. Goodell let all of you down. All of us, down. I graciously accept the offer by my fellow owners to allow us to keep our title. Giving it away would not make it fair for the fans, and without them we are nothing. But this blatant abuse of your trust with not be tolerated.”

Before it even started he knew he had no shot. The indictment came before he even realized that he was the Peter Russo to Mr. Kraft’s Frank Underwood.

I wish I was at least Remy. He at least scares some people as opposed to being a self-destroying being.

Federal prison looms and the new Commissioner has already condemned Roger to rot for his puppetry.

Should’ve taken him out when I had the chance.

Although he with the strings was Mr. Kraft and poor Roger failed to cut the ties before he was in too deep. He just never thought the one man he trusted would turn on him faster than Seahawks fans could realize that everything they knew and loved was a lie on that first of February.

I guess it could be worse.

Naive ’til the end.