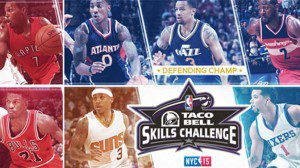 Gang Starr said it best: it is all in the Skills, Skills, Skills! So, let’s eat Taco Bell for Valentine’s Day, and toast cheap champagne, because the 2015 NBA All-Star Skills Challenge is the ultimate annual B-Ball obstacle course, and this season the stakes were higher than ever.

The triple threat hardwood task was in full-force with eight premier athletes in the middle of this spectacular night. However, the rules are a little different this year, which made for an exciting head-to-head format. Two players go at the course at once, like a race against tough tanks, complete with physical physics. It all definitely came down to the wire.

The NBA did well matching these dudes up, two by two, side by side. The first round, as in any competition, should and is all about judging your opponent at hand; the mental game is visible here. You could see it on Kyle Lowry’s face while he was stretching on the sidelines.

Patrick Beverley, who made a name overseas and is now blowing up in Houston, went up against Isaiah Thomas. Beverley won. Jeff Teague fought against my boy, Elfrid Payton. Jeffrey won. Of course, Payton is gangsta; Teague has a chip on his Atlanta Hawks’ shoulder. The reigning champion, Trey Burke battled Brandon Knight. Knight upset Burke. German phenom, Dennis Schroder went against the highly skilled Kyle Lowry, and Lowry proved too much for the polychromatic cranial youngster.

In the next round, when it got down to the proverbial wire, Kenny “The Jet” Smith got ghetto in his speech, while the highway court heats up beyond Brooklyn belief. New York has been asking for the heat, especially in this snow-blanketed new year. Take it from a New Yorker, this year’s festivities and the display during Skills Challenge had the epic flavor to last forever.

Subsequently, Jeff Teague of the surging Atlanta Hawks moved on and went face-to-face against Mr. Patty Beverley of the hot Houston Rockets. In that round, Beverley fell behind at the chest pass zone. Yet, as the dorky Reggie Miller has said, time and again, it is all about the shot put. Put the shot where it needs to go at the right time and you will win the rhyme.

Patrick Beverley sprinted back and knocked Teague’s ball outta the way, thus winning his way to the final round. That being said, Mr. Beverley wasn’t supposed to be in the Challenge; he replaced John Wall.

The aforementioned Kyle Lowry went toe-to-toe with Brandon Knight of the Milwaukee Bucks. Knight killed Lowry with an unexpected quickness. Milwaukee, as we all know is Algonquin for “The Good Land” and that is the opposite of how Lowry found himself in Knight’s wake. Knight won and moved on in the wild skills race of the day.

Finally, after commercials galore, and Charles Barkley trying to call it without honestly saying anything, then the Skills Challenge went to the next level. Beverley faced Knight. And, again, it came down to the wire. Thank goodness for suspense. Man oh man, was this fun. Beverley ran the same path as in the previous round. He fell behind on the chest pass, but then raced back and hit his Three-pointer straight away to win the whole thing.

It is so good for the association that a dude that paid his dues overseas is now making a name for himself here in the Mecca of basketball. Cheap Champagne cheers to all the participants. Spike Lee should make a movie about this year’s Skills Challenge and call it The Long Wooden War.