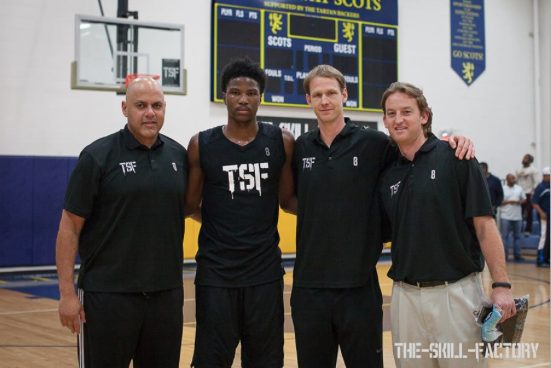 Growing up in Boston, I’ve experienced some bad traffic. However, the back-up you’ll see on the Mass Turnpike is nothing compared to what goes down in the great city of Atlanta.

Traffic in the ATL can be hell! Every day around 3pm, the highways fill up with people trying to escape their workplace early. As it gets closer to 5pm, the number of escapees grows to such a ridiculous number that all traffic stops and the highway essentially becomes a parking lot.

Despite the honking of horns and the level of irritation that many drivers are dealing with at the moment, today’s traffic gridlock worked out for the best.

It’s thanks to this traffic that I had the chance to speak with one of the partners at The-Skill-Factory, Jeremiah Boswell. After a few hold ups, today was the best time to get on the phone and pick the brain of someone who really knows the game of basketball.

The-Skill-Factory is an organization that helps athletes on all levels in various sports become greater at their sport. Boswell and his partners have been very influential in the growth and development of several basketball players.

Tapping from his own hoops background, Boswell has helped many players improve their skills and reach heights they never thought they could.

While sitting in traffic, Coach Boswell spoke to me about his basketball background, the players he’s worked with, the difference between U.S. players and players coming from overseas, whether or not AAU system are developing players properly and more.

Ballermindframe: Explain your background to me. What got you into hoops?

Jeremiah Boswell: I’m from a small town, Jasper Georgia, about an hour north of Atlanta. In small towns like that, sports are very important and everybody grows up playing everything. I played multiple sports growing up until playing only basketball in high school. I was Regional Player of the Year and an All-State player multiple years at Pickens High School. I got some looks from majors and mid-majors before deciding on Columbia University. I fell in love with New York on my visit, and the coach at the time had played for the Atlanta Hawks, Armond Hill. I really liked Coach Hill and his background as an NBA guard. I went up there for four years, and learned a lot.

From there I worked at the NBA office in the player development department for a couple of years, but through all that time I still wanted to play. After a lot of before and after work gym hours, I ended up going overseas to play for seven years. In the off-season I would stayed involved with NBA programs, including helping them launch new programs throughout China and India.

When I stopped playing a couple of years ago, I knew I still wanted to do the skill development and training piece. So I merged my business with Josh Burr and Doug Coombs of The-Skill-Factory and it kinda took off from there.

Ballermindframe: What made you feel like this was a service that was needed?

Jeremiah Boswell: We had a strong belief from our own personal backgrounds that being skilled and playing the right way can really help your basketball career. I’m a guy that is 6’3 and 180 pounds when I’m wet. So I really had to rely on skill development and basketball IQ. That was the understanding we had from personal experience. We also wanted to target the 95 percent who got cut from their team or weren’t superstars, and still feel like they can get better, but sometimes got left by the wayside. In regards to the pro market, we knew that Atlanta would be great because there are so many athletes, yet very little structure. 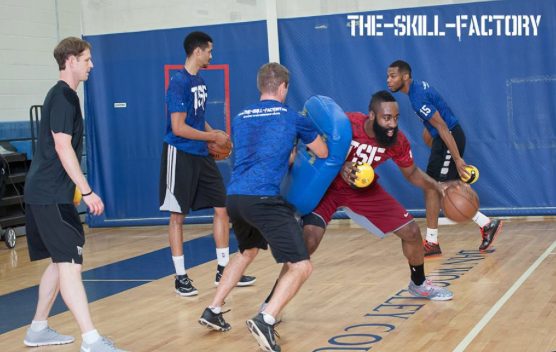 Ballermindframe: Who are some of the pro players that you had the chance to work with?

Jeremiah Boswell: We have been blessed to work in some capacity with a long list of great players in the NBA and overseas including James Harden, Paul Millsap, Dahntay Jones, Hollis Thompson, and many more, but this year I would highlight two names. There’s Elijah Millsap who is Paul Millsap‘s brother. Eli is a great player but just hadn’t gotten over the NBA hump yet. We spent a lot of time with him during the offseason, and as a credit to his focus and hard work, he recently extended two 10-day NBA contracts into a three-year contract with the Jazz. Also, Dennis Schroder with the Hawks.

Dennis was extremely focused this offseason and I’m so excited to see how he has grown into an NBA Rising Stars All-Star this year.

Ballermindframe: What do you think is the hardest bad habit to train out of a player?

Ballermindframe: What are the differences in the players who come from overseas to work with you vs the domestic players.

Jeremiah Boswell: There’s a lot of ways to answer that question. In terms of personality, they come in with a lot of humility. I think U.S. players have a certain expectation when they go somewhere. That kind of comes from the culture we have created where if you’re good when you’re seven-years-old, you’re given free gear and people start to look up to you. You kinda get trained to have a certain aura or presence about you. In contrast, the European or Asian players are a little more humble to start.

On the court, and not to generalize, they’re not as athletic, and they have a better understanding of the game. In Europe, they teach the pick-and-roll at such an early age, they’ll know all the reads and all the right plays, whereas players in the U.S. tend to learn that later in their careers.

There is also a different value on shots in paint and an open shot. A guy in the U.S. will attack looking for a shot, whereas a player from overseas will attack to create for somebody else and kick it out.

It’s a lot of fun to see these two worlds collide and see the growth and evolution of the game.

Ballermindframe: Kobe Bryant criticized the A.A.U system and says that it does a bad job and teaching the game of basketball and praised how players from Europe are trained in how to play the game. How do you feel about his comments?

Jeremiah Boswell: It’s hard to put every program into one category, but in general I agree. That’s what we have been trying to do in Atlanta with TSF the last three years is provide an alternative to what Kobe was talking about. There are a lot of places where it’s all about recruiting the best talent. We believe the talent will come if we do it the right way. We know that we’re going to play less tournaments than other teams, we’ll focus more on skill development, and we won’t worry about running too many sets. That’s what we have been trying to do over the last three years and I feel like that’s why we’re gaining more respect for what we do.

Ballermindframe: Prime Time Prep star Emmanuel Mudiay made headlines when he jumped from high school to play in China, skipping college all together. With people like Kobe praising the training players get overseas, do you think we’ll see more players going from prep to overseas.

Jeremiah Boswell: It seems to be more talked about now and I’m not surprised when it happens. I personally value the educational system and the growing process provided by universities in the U.S. But if somebody is trying to get a one-season basketball-education, and it makes more sense financially for them to get paid at the same time, I’m not opposed to that. If it’s inevitable they’re going to be one-and-done anyway, then I think that you can get something positive by being out of your comfort zone and in new cultures and systems. The guys who go over will learn a lot and may realize they don’t know as much as they think they know.

The problem arises when players who aren’t at the one-and-done talent level start doing it and end up not making their millions and don’t have an education.