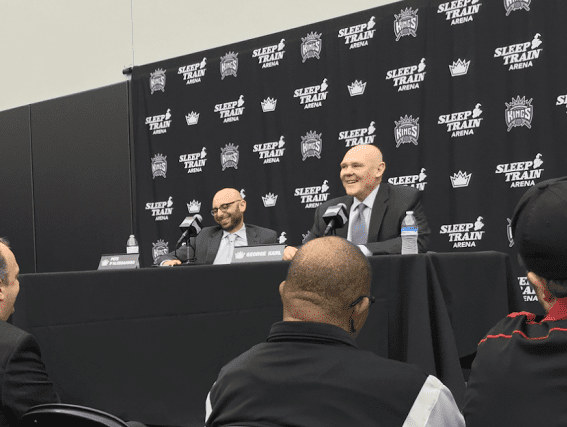 When George Karl was introduced to Sacramento media outlets in a formal press conference, he wasted no time addressing the issues that have plagued the team in Ty Corbin’s term as interim head coach.

He recognized that the basketball culture surrounding the franchise and its fans has suffered, pointing out that most of the pre-existing continuity within the team has been absent for the last two months. There is a necessary confidence when building a successful team, according to Karl, and it’s a confidence he hopes to install immediately.

Part of this confidence, the team says, will be built on GM Pete D’Alessandro’s existing relationship with Karl. The two worked together in the Denver Nuggets franchise, where Karl won coach of the year before leaving the team. Whereas Corbin’s existence within the Sacramento franchise was a last resort, D’Alessandro has made it clear that this was the man that the team wanted. Both he and Vivek Ranadive, he explains, have had their eyes on Karl since Malone was fired.

“There’s comfort level when you’ve gotten to work with someone. I learned so much from him, honestly, in the three years I was there in terms of him talking about how he likes to coach,” said D’Alessandro.

In the time between his head coaching stints, Karl has fought two battles with cancer that have, he believes, shaped his personality and philosophy as a head coach.

“I was a dictator of everything on the practice court. Since my second cancer I’ve become more balanced and I can direct. I think in the next 30 games I’m going to be pretty dominant on the court because I want them to know my passion, my philosophies. But come next year I’ll be how I was in Denver from the standpoint of delegating a lot,” he said.

Many people surrounding the organization suspected that next year’s season-ticket renewals were the main reason for making the change mid-season, but D’Alessandro assures that this was purely a decision made for the well-being of the players. He evaluated the lack of understanding between the players, and recognized that any and all positivity that had previously existed has been absent as of late.

So, while it is a priority to fill the new, extravagant arena that the Kings will call home next year, nothing was of higher importance than improvement of the team into next season.

Looking at the players and the roster that comprises the Kings will hopefully be heavily impacted by Karl’s input. It’s no secret that he is well-versed and experienced in evaluating talent and making necessary changes accordingly. Ranadive is an owner attempting to understand NBA basketball, and D’Alessandro is a fairly unaccomplished GM still looking for knowledge wherever he can find it.

The team says that Karl will be actively involved in making draft selections and trades which may be a reason for the timing of his signing – the trade deadline is fast approaching.

“[He’s a] big factor. I trust him as a coach, and I trust him as an evaluator. He’s a partner in this for me. When you have a coach of that stature and that magnitude, that’s an asset. So that how I’m going to look at this,” stated D’Alessandro.

While there will be a learning curve as Karl becomes integrated with the team, D’Alessandro expects success to come in the immediate future. Whether or not that is realistic remains unclear, but it doesn’t hurt to have one of the winningest coaches in league history.

The Kings’ GM remained clear when stating his goals for the remainder of this season.

“We want success. That’s really the bottom line. We want to get these players focusing again. I think we have the coach to do that. It takes time to install a system, to get going, but we get 30 games to start that process now, and then we have training camp.”