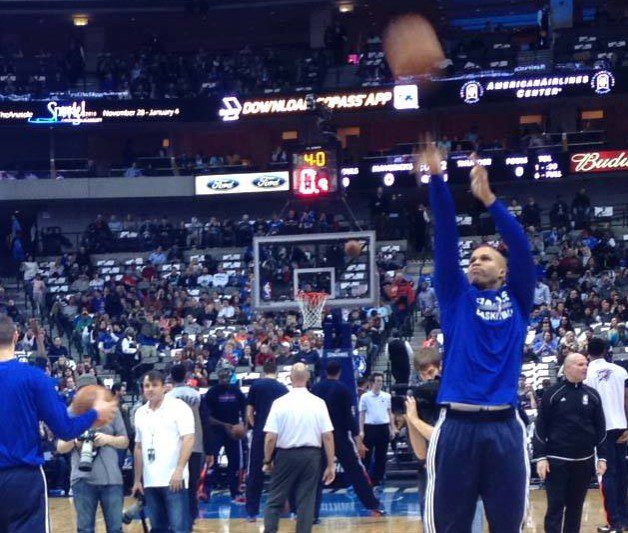 There were some odd things happening on the court of the American Airlines Center during the course of a very chilly Monday evening, one being Dallas Mavericks’ starting (troubling) point guard Rajon Rondo giving the side-eye to those who believe he doesn’t exist outside of Boston’s best years, the other being Dallas asking former Maverick Alexis Ajinca to kindly bend over and grab his ankles in front of thousands of screaming fans. Rondo, sharpened with a newfound amount of vigor that apparently appeared at the sting of coach Rick Carlisle’s baritone echo, put up 19 points in the Mavericks 102-93 win over the ailing New Orleans Pelicans, slicing the latter’s five-game winning streak in the jugular.

Rondo was aided by a slew of welcoming teammates, including Monta Ellis (who put up 20 points), Richard Jefferson, and an irrepressible Amar’e Stoudemire, who appears to have exceeded any expectations Dallas fans had of the former New York Knick.

“He’s a really good player, and he’s into it,” Carlisle expressed about Stoudemire following the game. “I knew how hard it was to game plan for him this year, so I expected him to be good. He’s just a super guy, too. He’s a really positive guy in the locker room and at timeouts and stuff like that, and that’s really impressive. He’s doing a terrific job for us.”

More often than not, attempting to blend into a new setting can sometimes enervate a player, especially when the locker room flow is void of any ugly jagged edges akin to a Sharknado screenplay. But Stoudemire’s finding the transition to be a smooth one – both in the locker room and on the court with his teammates – and appears to be getting more comfortable with Dallas’ particular system.

“Yeah, I am,” Stoudemire said in the locker room about whether or not he’s getting comfortable in his role with the team. “It’s taking a little time, but I’m definitely getting more comfortable, offensively and defensively as well. As the season goes on and as I continue to practice more and kind of get with the guys, I’m sure I can get more comfortable.”

The Anthony Davis-less Pelicans were no match for Mavericks, six of whom put up double figures, despite the visitors supposed saviors in Norris Cole, Eric Gordon, Tyreke Evans, and Luke Babbitt’s distracting hairdo (“Just give me the Monica Lewinsky via 1998,” is something I’m assuming his barber hears quite a bit). The nail came down in the third when Dallas went on a 16-0 run to secure the lead, seven of those points Jefferson’s.

“I just have to credit my teammates, really to tell you the truth,” Jefferson modestly said of his performance and success during the game. “I’ve been working the last couple of games (and) I wasn’t too pleased with my performance especially in the second half. I would normally get off to a good start in the first quarter and then kind of miss some shots. I just tried to focus on driving the ball a lot more and letting that open up some shots for me.”

Dallas heads to Portland to take on the Trail Blazers at the Moda Center on Thursday evening.