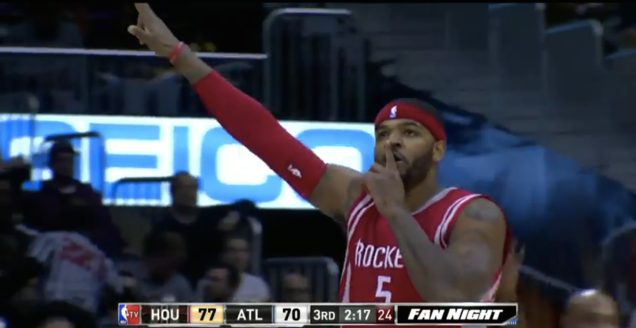 Tuesday night, the Houston Rockets lost to the Atlanta Hawks 104-96 in what has a chance of being an eventual Finals matchup.

The final buzzer, though, didn’t stop either team from trading shots.

Throughout the game at Philips Arena, fans showered Josh Smith, a long-time Hawks staple now donning Rockets red, with a chorus of boos. Smith’s years in Atlanta, you’ll remember, were marked by terrible shot selection, uneventful playoff runs, and terrible shot selection. Smith responded on the court by hitting a three with a little help from lady luck.

After the game, Smith had some words the fans that (perhaps, at times, begrudgingly) cheered for him for nine years. Per ESPN’s Kevin Arnovitz:

“I mean, those fans are fickle, very fickle and bandwagoners,” Smith said. “It really doesn’t mean anything to me.”

While Smith doesn’t exactly have footing to stand on to criticize the fans for their criticism of him, he’s not exactly wrong. Philips Arena has been notorious in recent years for been a desolate wasteland, where opponents seemingly have a bigger turnout of supporters than the home team. With the Hawks’ success this year, that hasn’t quite been the case, but it’s ironic that fans were booing Smith for ruining a team they don’t seem to care about that much in the first place.

Atlanta has probably been the biggest surprise this year. With LeBron James, Kevin Love and Kyrie Irving joining forces in Cleveland, and Pau Gasol joining a (presumably) healthy Derrick Rose in Chicago, the Hawks were on the back of people’s minds during the preseason. Sure, some may have had them as a darkhorse, but no one predicted they’d be up 10 games on second place by this point of the season. Bottom line, they’re a surprise and a team worth rooting for.

So you’d expect Hawks fans would be foaming at the mouth to see their team win games, right? Wrong. Atlanta places 12th in the league in attendance, despite having one of the NBA’s best, most fun-to-watch squads. By comparison, with the same amount of home games thus far, the Sacramento Kings are 14th, and just about 17,000 ticket sales behind. The Sacramento Kings, the same team that’s on its third coach this season, has 21 wins, and a front office that has thrown garbage at fans for most of the year; they almost have the same attendance figures as the No. 1 team in the East.

So Smith’s not quite wrong in saying Hawks fans are fickle, but bandwagon might be a stretch since they don’t seem to be filling the arena even for a good team. Maybe they don’t care much about the team, but, as Jeff Teague made clear, there’s no apathy when it comes to Josh Smith.