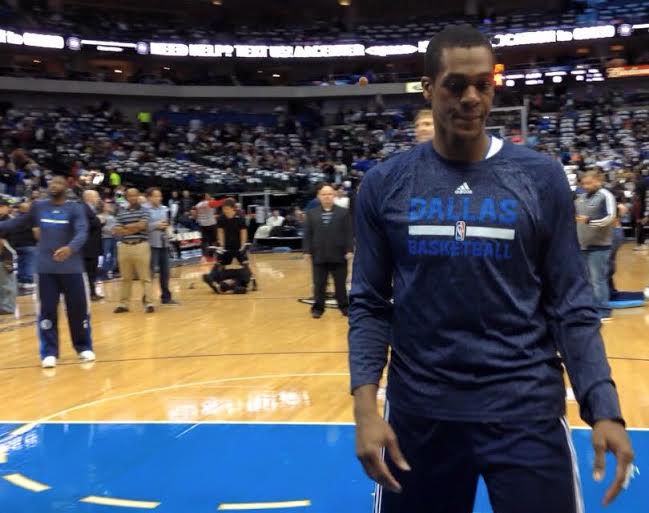 There was a brief moment in the first quarter of the Dallas Mavericks versus Los Angeles Clippers game, specifically after Amar’e Stoudemire grabbed an offensive rebound following a missed Charlie Villanueva three-point shot, when it seemed like the entire Mavericks offense suddenly went all “Ricky Bobby” on each other – they had no idea what the hell to do with their hands. After Stoudemire missed a tip shot, he managed to rebound and missed again. The Mavs rebounded and the former New York Knick missed again, but this time the Clippers got their hands on the ball and then a dyslexic version of what took place on the Mavs’ end of the court was taking place on the Clippers’.

It was, in a word, weird, and not at all what followers of Dallas wished to see in these key opening minutes. Yes, they were finally getting those coveted rebounds! But no, they had no freaking idea what the balls to do with them once they were acquired! It became increasingly frustrating when less than a minute later, the Mavericks would steal the ball, only to turn it over on a ridiculous pass. It was a familiar sight, a depressing sight, a fatal sight.

So how did a team, who had been doing a decent impression of a garbage fire these past few games (not to mention during that first quarter), best of one of the top teams in the Western Conference by 30 points after such a rocky start?

“Well, we were due,” Dallas head coach Rick Carlisle expressed following their blowout win. “We were due to play better, we were due to compete better, and compete better as a group. The challenge now is to sustain this and it’s gonna be a challenge, but we made significant strides tonight. I thought our guard play was tremendous. Our starting guards were fantastic on the ball.”

Rajon Rondo, who has been mixed up inside an imbroglio since his arrival in Dallas, was one of those said guards who came alive on the defensive end of things during this particular game, a place where he only has been a mere grey-shaded apparition as opposed to the dynamic presence Dallas had hoped for in the December trade. Rondo had four points on 2-for-5 shooting and seven assists, a performance which was only a mere violin solo in the Mavs offensive ninth symphony during the game itself. The Mavs shot 60.7 percent from the floor and routed Los Angeles 129-99 thanks in part to Chandler Parsons and Villanueva’s double-figure night (22 points and 19 points, respectively).

But it was Rondo that Carlisle was praising.

“Rondo had an awesome presence in the game tonight at both ends,” he gushed about his starting point guard to the press. “He’s really developed a good handle of our team. With 15 (games in the regular season) left, I love where he was – the way he played tonight. I thought (Monta) Ellis was terrific, (J.J.) Barea and (Devin) Harris (also) brought energy and pace off the bench and were really, really good.”

While he did mention Barea and Harris (who both scored 15 points off the bench), it was Rondo he strangely boasted about (even when a journalist went on to ask about Parson’s performance, as seen in the video below), the only starter who didn’t break the double-digit mark that evening. While the troubled player, who verbally sparred with Carlisle in front of cameras during a game last month, showed improvement during this game, was it necessary to treat him to a slow clap in front of the media? The same media who happen to be the key mouthpiece to the public?

In order to change Rondo’s frame of mind, yes – it is necessary.

Because Rondo’s altercations were viewed in front of the world and his secluded-like demeanor in the locker room placed on display, the right motivation from the outside is what he needs to smooth over these last 15 games, motivation that comes in the form of a simple game recap complete with coach commentary.

Alright, time to bear with the writer for a minute…

Rondo and his future with Dallas is a great deal like the thought experiment of Schrodinger’s cat, also known as the observer’s paradox, where a cat is placed in a sealed box with a flask of poison and a radioactive source which may, or may not, kill the cat on its own. Now, if the observer actually opens the box to check for themselves, the flask will definitely shatter and kill the cat, so quantum mechanics suggests that the cat is both simultaneously alive and dead at the same time if the observer doesn’t try to sneek a peek. Rondo, his future being the cat itself, is in a state of purgatory at this uneasy juncture. If those surrounding him wish to probe deeper into his rocky relationship with his coach and the troubles that ensue on the court (opening the box), it will only lead to more turmoil in these final games and cost a trip to the playoffs.

But, if Carlisle himself starts soothing his point guard’s temper via the press, it will push Rondo enough to secure a comfortable place for the Mavericks in postseason history, the lid remaining safely sealed despite the glaring truth that presents itself on the court.

Words, in this business, mean nothing. It’s all in the action, and if Carlisle wishes to “sustain” this sort of momentum as he mentioned, he needs to keep his point guard content by using those inflated words.

If you had to guess based on those fulsome phrases and carefully crafted answers, it would appear that Dallas has found an alternative way to look inside the box and already know if that cat is alive or dead – but it will most likely take until their season has come to a close for those on the outside to discover the Mavs’ exact endgame.

The Mavericks will face the Oklahoma City Thunder on Monday evening.