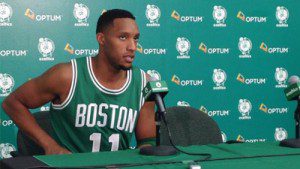 After dropping their previous contest against the Milwaukee Bucks, the Orlando Magic looked to get back on track against the Boston Celtics. Like last Sunday, the two eastern conference foes battled tooth and nail with the Magic pulling away late thanks to Victor Oladipo. This time, it was Evan Turner who put together a late surge to lead the Celtics past the Magic 95-88.

Both teams started the game struggling to get much offense going. A total of nine points total was scored among the two teams until head coach, James Borrego, jump-started the Magic as they would go on an 11-0 run to take an eight point lead. However, Luigi Datome and Avery Bradley would hit a couple of threes to get within four heading into the second quarter. Magic led 23-19 after one.

The Magic and Celtics would trade scoring runs early in the second quarter, with the Celtics going on a 5-0 run only to see Orlando rip off a 10-4 run themselves to take a five-point lead. Tyler Zeller would commit a hard foul on Nikola Vucevic that ended up drawing blood and thus earning him a flagrant one. The Magic would go on to push their lead to as many as 10 heading into intermission thanks to Victor Oladipo, and Tobias Harris who hit a jumper at the buzzer. Magic led 50-40 going into halftime.

Just like the first half, the Celtics would go on a quick 7-0 run before giving up an 11-4 run to the Magic. The third quarter would belong to Elfrid Payton who seemed to torture Boston with his penetration and playmaking abilities. Despite a brilliant showcasing by the young Magic point guard, it would also leave a wart on his resume. Boston elected to use the Hack-a-Elf and it worked too well as Elfrid went 3-13 from the charity stripe. With the Celtics beginning to gain momentum, Kelly Olynyk hit a three to cut the Magic lead down to six heading into the final stanza of the game.

Carrying momentum from the third quarter, Olynyk would score 5 points to bring Boston within one. Luke Ridnour and Muarice Harkless would manage to stop the bleeding with a jump shot and a driving dunk moments later. After both teams went scoreless for nearly three minutes, Avery Bradley and Olynyk broke the ice with two threes. Orlando would manage to push their lead back up to four but then Evan Turner would spearhead a late surge.

With under four minutes left; Turner would hit a jumper to bring the Celtics within two; followed by a circus jump shot to draw the foul for the And-1 to take a two point lead. After Vucevic tied the game at 85; Turner would go on to be responsible for the next eight points for Boston, including a backbreaking dunk by Brandon Bass. The Magic would end up losing 95-88

Evan Turner led the Celtics with a game-high 30 points. Kelly Olynyk had 13 points. Both Phil Pressey and Avery Bradley had 10 points, with Pressey also tallying 10 assists for the double-double.

Elfrid Payton led the Magic for the first time with 20 points and 9 assists. Nikola Vucevic would put up a double-double of 16 points and 11 rebounds. Tobias also had 16 points. Victor Oladipo and Aaron Gordon would both finish with 11 points each