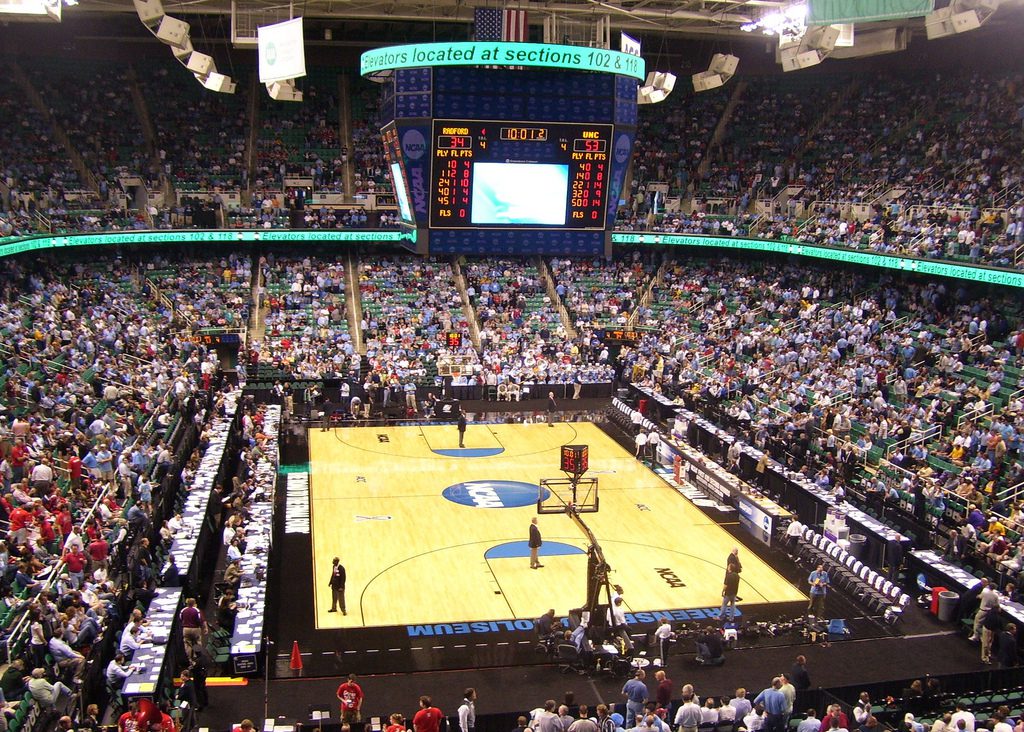 Last year I decided that it was my duty to, in the spirit of Bill Simmons’ NFL Playoffs Manifesto, pen a March Madness Manifesto; a guide to how to correctly choose a National Champion AND pick a winning bracket in any sort of NCAA Tournament pool. I was utterly convinced that by doing an unnecessary amount of research on the trends of past NCAA Tournaments AND by spending more hours watching college basketball during the regular season than I probably ever have in my life that I would be able to overcome a horrible track record picking NCAA Tournament games. Believe it or not, I have zero bracket pool victories and since 2002 I’ve only picked the eventual tournament champion correctly three times (North Carolina in 2005, Florida in 2007 and Kentucky in 2012; and if Chris Douglas-Roberts and Derrick Rose makes their free throws in 2008, you can add Memphis to the mix).

Regardless, I put my past behind me and talked myself into this Manifesto being something that could work. Of course, the 2014 tournament turned out to be substantially goofy from the First Four through the Championship Game, where 7th seeded Connecticut defeated 8th seeded Kentucky for the title. With Connecticut’s victory, four of my ten rules were thrown right out the window, including:

After that all-too-humbling experience I decided to go back to the drawing board and adjust the Manifesto. Actually, calling it an adjustment would be an understatement. The March Madness Manifesto has been totally re-tooled so that there is less of an emphasis on just finding the eventual National Champion. In fact, I would advise you to use each step to narrow down the field as you are filling out your bracket. Or don’t, because remember, I usually suck at this.

It’s never happened, and even if it may happen somewhere down the line, you shouldn’t sacrifice your bracket just because you have a hunch that Coastal Carolina should be a 14 seed rather than a 16 seed. The trends show that 16 seeds are playing 1 seeds tougher than in the past (four of the last twelve 1 vs. 16 matchups have been decided by single-digits) but that doesn’t mean you should pick a 16 outright. Go ahead and bet on a 16 seed when they’re an 18 point underdog. I have no issue with that. Just don’t be the guy walking around telling people “Lafayette is going to beat Villanova. Trust me, it’s going to happen!” Nobody likes that guy. People make fun of that guy.

RULE NO. 2: Do your best to factor in Cinderella runs

Last year this rule read “The clock always strikes midnight for Cinderella teams.” Connecticut shit all over that notion, so naturally the rule had to be altered. Here are three sub-points to this rule to remember when doing your Cinderella scouting:

a: History says a few 12-15 seeds will advance past the 1st Round

In the last ten NCAA Tournaments, there have been 160 1st Round games of the 5/12, 4/13, 3/14 and 2/15 persuasion. 35 of those 160 games have been won by the lower seed. That doesn’t sound like a massive number, but it works itself out to an average of three and a half 1st Round upsets of this type per tournament and again, it’s not a huge number, but it’s definitely something to consider when you’re filling out your bracket.

The 12 seed over 5 seed upset is notoriously popular at this point, and for good reason. In the same ten year time frame, 12 seeds have won that 1st Round matchup 45 percent of the time. Let’s dive even further; only two of the past ten tournaments haven’t featured a 13 seed advancing past a 4 seed. Now the question becomes, how are you supposed to forecast these upsets? Don’t worry, we’ll get there soon enough.

b: History says a few 7-15 seeds will advance into the Sweet Sixteen

I used the 7 seed as the cutoff point for this sub-point because that means either a 1 or a 2 seed isn’t making it to the second weekend of the tournament. So once again, let’s use the last ten NCAA Tournaments as the sample size. Of the 160 teams that have made it to a Sweet Sixteen in the last ten tournaments, 35 of them have been seeded 7 through 15. In case you weren’t paying attention earlier, that means on average three and a half teams in the Sweet Sixteen (nearly 25 percent of them) got there by pulling off an upset or two. I know, I know. You’re dying to hear how to peg these upsets.

c: When in doubt, make sure your Cinderella teams are well-tested

Last year I called this “The Davidson Corollary.” Here’s what I wrote:

“Back in 2008 when Davidson made a run to the Elite Eight (and damn they were close to shocking Kansas and making the Final Four), the blueprint wasn’t as simple as “We’ll ride Stephen Curry’s hot streak to as many wins as possible.” It was set in the regular season when Davidson played North Carolina, Duke, UCLA, and North Carolina State. Sure, they lost every one of those games, but not by a wide margin. The Wildcats proved to themselves that they could compete with the big boys and that confidence carried over to the NCAA Tournament. VCU and Butler followed this model in 2011, when they played a combined twelve games against Tournament teams in the regular season.”

Makes sense, right? If a lower seeded team goes into the tournament well-tested it usually means two things. First, it usually means that the team in question will have confidence that they can play against good teams in the tournament, so long as they didn’t get pummeled during those regular season games. Second, if they actually were competitive during the regular season against “better” teams it could mean that the team in question most likely is good enough to hold their own against good teams in the tournament, and even if they aren’t “better” than their opponent, All they need to do is outplay them in one game. Even the 2014 Connecticut Huskies, a major conference team that entered the tournament as a 7 seed, can be mentioned here. This sub-point isn’t exclusive to mid-majors. Connecticut played Harvard (2nd Round tournament exit), Stanford (Sweet Sixteen) and Florida (Final Four) in the regular season, and played a total of nine games against Cincinnati, Memphis and Louisville (1st Round, 2nd Round, Sweet Sixteen respectively).

If you subscribe to this theory, then the best candidates I can find this year are 8-seed NC State (went through a brutal ACC schedule, has wins over Duke, North Carolina and Louisville), 12-seed Stephen F. Austin (faced Northern Iowa, Xavier and Baylor in a six-day stretch back in November) and 12-seed Buffalo (led both Kentucky and Wisconsin at halftime in their meetings earlier this season).

RULE NO. 3: Do some research on shooting stats

Another rule that the 2014 Connecticut Huskies flirted with breaking last year, but under the new rule they actually qualify. My good friend Collin Stucko once said “the best defense is a good offense” and when it comes to the NCAA Tournament and Madden video games, I agree. I need my National Champion to be able to score the ball efficiently and in a number of ways. That’s just the way it usually works out. For argument’s sake, we’ll say they need to shoot at least 45 percent from the field, 36 percent from downtown and either rank in the top 30 in Free Throws made or the top 30 in free throw percentage. If that’s the case, only the 2010 Duke Blue Devils (were 44 percent from the field) and the 2011 Connecticut Huskies (43 percent from the field and 33 percent from three point range) are the only champions since 2005 not to qualify. Here are the seven teams that get a check mark in all three categories this year: Notre Dame, Stephen F. Austin, Arizona, Lafayette, Villanova, Oregon.

No Wisconsin. No Gonzaga. No Duke. No Virginia. No Kentucky. Expect another readjustment to this point for next year’s March Madness Manifesto, Version 3.0.

RULE NO. 4: Find the teams you would feel comfortable betting your life on

Imagine that you’ve been kidnapped Taken style. And let’s assume that your father isn’t Bryan Mills, and you know nobody who has a particular set of skills that will ultimately free your from your captors. Now let’s assume that your captors tell you that you have a chance to free yourself, and the only way to do so is correctly pick all four Final Four teams. This is how you should go about filling out your bracket. With an Albanian pointing a gun at your head, which teams would you select? That’s quite a bit of pressure, isn’t it? Well if there are any individuals out there who happen to be in this predicament, leave a comment at the bottom of the page and we’ll get you some help. If your captors would frown upon leaving a comment, just take my advice with these four sub-points.

Which teams have a player or players on the roster that are capable of putting their team on their back just like Kemba Walker and Shabazz Napier did in 2011 and 2014 respectively? And for what it’s worth, this doesn’t need to be a point guard. Just someone you can envision going into a huddle down six points with five minutes left and saying “Alright, get me the ball. Let’s get back in this.”

Don’t trust John Thompson III (since 2008 Georgetown has been beaten by a 10 seed, 14 seed, two 11 seeds and a 15 seed in the NCAA Tournament) or Rick Barnes (Couldn’t get out of the first weekend of the tournament, despite the fact that he had Kevin freaking Durant on his team). Be wary of Bo Ryan (Wisconsin’s only made it past the Sweet 16 once since 2006 and they have been bounced in the first weekend of the tournament five times in that same time span). I feel comfortable backing Tom Izzo and John Calipari. Despite some occasional slip-ups, Mike Krzyzewski, Bill Self and Rick Pitino are usually safe bets. And listen, this point doesn’t call for you to fill out your bracket based solely on who is at the helm of each team. Just use the coaching matchup as a last resort when you’re looking at two otherwise even teams.

Note that this doesn’t read “most talented rosters.” That’s a different discussion, and maybe one that is just as important. For now, I’m more concerned about the rosters that makes the most sense from a basketball fit standpoint. I’m talking about the roster that has the most guys that you could look at and say, “Oh yeah, I would feel reasonably comfortable with my life in his hands.” I’m talking about a team that can just as easily dig themselves out of a 15 point hole as they can build a 15 point lead in the blink of an eye. Those are the sort of teams that I would trust with my life on the line.

These three points are why I have Kentucky (for obvious reasons) over Arizona (they came so close last year, have some NBA talent, a great coach and a gritty roster) and Iowa State (they are never, ever out of a game) over Villanova (seriously undervalued and I just love the way they play as a group) in the Final Four, and Kentucky defeating Iowa State in the National Championship. When it comes down to it, those are the teams I’d be at least a little comfortable with if my life were in their hands. Enjoy the Madness.