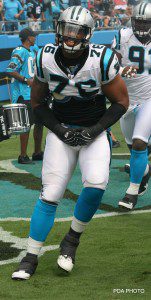 Greg Hardy and the Dallas Cowboys have agreed to a one-year, $11.3 million deal. The embattled defensive end can make just north of $13 million with incentives. This has been confirmed by Adam Schefter of ESPN.

Let the bell of controversy ring. Hardy, a former sixth-round pick who emerged as a freakish force for the Carolina Panthers, had a nightmarish 2014 season. He played in just one game because of legal preoccupations stemming from an assault. Hardy was convicted on two counts of domestic violence, but the rulings were later thrown out after the accuser couldn’t be found to testify in the appeal process. Some have speculated that Hardy and the victim agreed to an out-of-court settlement.

Regardless, Hardy’s issues don’t necessarily end there. Like last year, the defensive end is still on the commissioner’s exempt list. He’s seeking to be reinstated and avoid a suspension. Within the fine print of this contract, Dallas is heavily protected from negative ramifications. In a New York Post article that examines the contract in detail, it states how Hardy’s base salary will only be $750,000. Major money will be made should he stay on the field, something Roger Goodell will largely determine. Hardy’s status is reportedly under league review.

That part is simple enough. Hardy remains in the purgatory of technicalities and unknowns, but Dallas is willing to gamble on talent. Isn’t such always the case? Fringe players with legal dilemmas are discarded. Superstars with the same issues remain desired. From 2012 to 2013, Hardy combined for 120 tackles and 26 sacks in Carolina. That’s a savage string of success. In Dallas, a team aching for an improved pass rush, Hardy has the opportunity to invigorate a defensive unit that made strides this past season. His criminal background, however, even with his case dismissed, will follow him forever.

That’s what makes this signing fascinating. The Cowboys will resemble buffoons if Hardy finds himself in another legal mess at any point. That may result in Dallas cutting him. They’ll appear brilliant if the star lineman avoids a suspension and performs to his peak ability. That may result in Dallas signing him long-term. In the eyes of some, Dallas will seem spineless for bringing in a player who quite possibly assaulted his girlfriend with terrifying viciousness. That’s for the general public to decide.

After all, the moral high ground becomes slippery when there’s a player on the market who has talent substantial enough to trump anything remotely ethical. The whole “we’ll never sign a player with that type of background” idea likely shrinks as the player’s stats are drooled over. The bigger his talent, the more justification goes into excusing his actions. Nothing is truly black or white in this world. Even Hardy’s guilt, so to speak, is complicated by an apparently concrete conviction turning loose once it was thrown out.

Who decides guilt? Who tilts the balance of controversial baggage and undeniable talent? In this instance, Dallas has put one foot in on Hardy as the other remains ready to run away. There’s a degree of brilliance present there. Spineless or not, Dallas is prepared for both Hardy’s stardom or his potential pattern of violence. Such is the beauty of NFL contracts. Their value is often determined by how much the player stays on the field, and to what level he performs. Usually, the player dictates that fate. In this case, Hardy will have a say, but Goodell might have more.