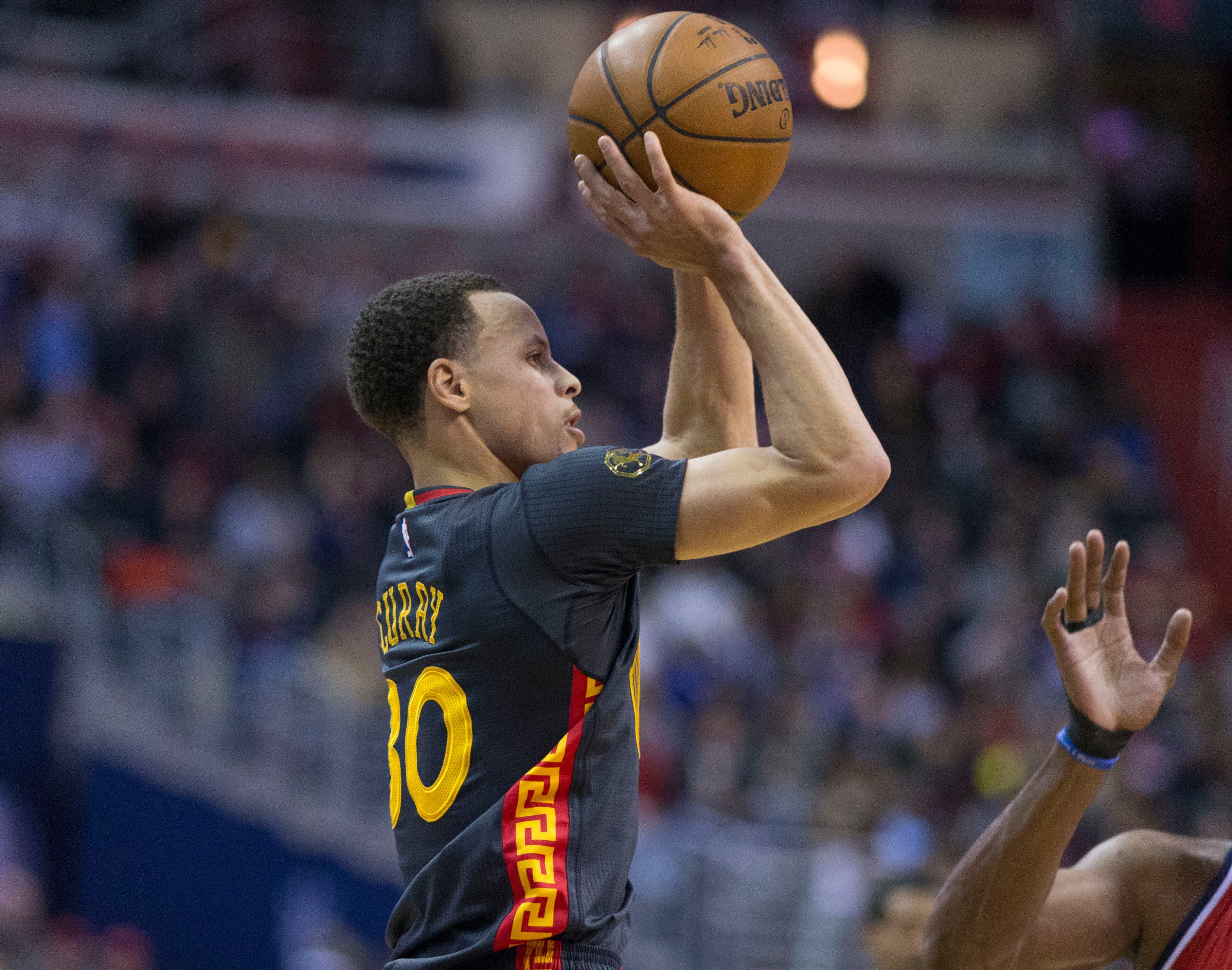 The 2014-15 Western Conference has lived up the hype in many ways. Nearly every night in the NBA featured memorable moments from a game between two Western Conference teams even if they aren’t always considered teams who are at the top of the totem pole. Last night’s instant classic between the Phoenix Suns and Golden State Warriors is a prime example of this fact.

Ramona Shelburne said it best after the game.

The Warriors really lead a charmed life, don’t they

A subject for another day.

The Phoenix Suns are now 3-11 in games decided by 3 points or less. That’s an inordinate amount of horrible luck in close games. If the Suns went .500 for those games, then the Suns are in the playoffs right now. Instead, they are on the outside looking in because the loss against the Warriors basically mathematically eliminated them from the playoffs (4.5 games back of the eight seed with six games remaining). This also deserves closer observation at a later date, but it’s hard to blame a lucky bounce and Harrison Barnes for the Suns’ coaching, chemistry, or talent level.

Injuries have taken away some of the excitement we all had for the Western Conference playoffs. The two biggest injuries occurred to the reigning MVP Kevin Durant and Wesley Matthews – their absences completely alter the path, and potential elimination, for other contending teams. Let’s pour two out for the possibilities.

Let’s get to the point: who will make the playoffs and what seeds will they hold? Prior to the live games, the Western Conference standings on April 3, 2015 are as follows: 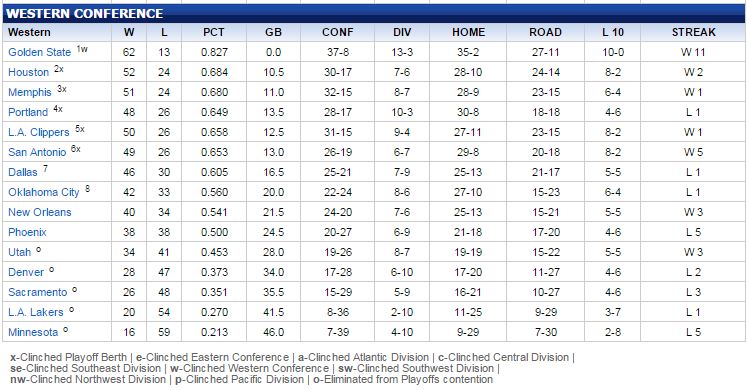 The wrong matchup in the Western Conference could send anyone packing in the first round. Yes, even the Warriors. There’s no way to know exactly where teams will be seeded, but taking an open-eyed stab in the dark won’t hurt anyone – this is a basketball column, not Vegas,

Sometimes all you need is a coaching change to get things going. Can someone get that memo to the Washington Wizards?

The Warriors’ brass stuck to their gut. Many people told them not to fire Mark Jackson, and place Steve Kerr in the heading coaching position. Nearly everyone over the summer asked, “How can you not trade Klay Thompson to acquire a top five player like Kevin Love?” The work speaks for itself.

The Warriors are far from a lock to win the West, but Kerr has undoubtedly unlocked something within the roster worthy of praise and closer to his sixth NBA Finals ring.

Most Surprising Stat: Tim Duncan has played 70 out 75 possible games

Tony Parker has been inconsistent until recently (and his defense against elite point guards is going to be a problem for the entire postseason). 2014 NBA Finals MVP Kawhi Leonard has played in 13 less games than Duncan this year, and is gagging in a contract year despite his desire for a max contract. The Big Fundamental is averaging 13.8 PPG, 9.2 RPG, and 1.9 BPG at 38 years old, being the team rock as usual.

Pundits declared the Spurs were done and incapable of defending their title for what feels like the tenth year in a row. Suddenly, they are the healthy, hot team and are poised to take the number two seed.

As the saying goes, “In this world, nothing can be said to be certain except, death, taxes, and the Spurs.” Or something like that.

Most Surprising Stat: Dwight Howard has played in 36 out of 76 possible games

How in the world is James Harden not the MVP? Howard has missed 40 games, and other solid Rockets have missed significant playing time (Terrence Jones, 49 games; Patrick Beverley missed 17 games before being declared out for the season).

We have to respect what Stephen Curry and the Warriors have accomplished, but we don’t know what would happen if Klay Thompson (the Warriors’ second best player) and several role players missed huge chunks of the season. We saw what happened when Harden led the Rockets through this crazy road. The team is unconventional but they win. That’s all that matters.

The postseason X-Factor is the coaching of Kevin McHale. I’m sure he’s still having nightmares about last year’s playoff exit.

Most Surprising Stat: 0 punches thrown at Austin Rivers for incompetence

Actual Most Surprising Stat: DeAndre Jordan shoots 71% from the field, 39% from the free throw line

In all seriousness, Austin Rivers has been OK. Not above average, but at least it meant less of C.J. Wilcox and Dahntay Jones. The bench is still horrid and Jamal Crawford‘s recent injury is a serious concern, but they have remained steady throughout the season, finding themselves on a current hot streak. Blake Griffin missed 15 games because of a staph infection in his elbow, and they weathered the worst storm of the season by going 8-7.

The blue whale in the room is DeAndre Jordan‘s free throw shooting. Doc Rivers has chosen to keep Jordan in games late despite this flaw, and Jordan has found ways to remain effective by dominating the glass and protecting the rim at an elite level.

Hoping for the Western Conference Finals seems like a pipe dream. The flaws seems so glaring, yet they keep defying expectations.

The Grizzlies should be called the “Bored Bears” this season. It’s hard to recall a legitimate contender this lackadaisical when it comes to playing inferior teams. Chalking it up to effort feels like a cop out, but it’s hard to know what to blame for their struggles since the All-Star Break.

The Jeff Green trade was heralded as the move that would push the Grizzlies over the top which basically showed that no one has been watching Green play basketball. If you give Green a certain amount of minutes, he’s going to give you a certain amount of production, but he’s never going to push anyone over the top. Marc Gasol has been less effective. Vince Carter started out as a strong sub in low minutes, and is now nursing himself until the playoffs.

The most damning evidence of a serious decline is what happened over the last ten days versus contenders: 89-111 at home versus Cleveland Cavaliers, 84-107 versus the Warriors, and 89-103 at the Spurs – three convincing beatdowns. I’m getting off the ship now before there are no more emergency rafts left.

Who am I kidding? I’m from Memphis. Go Grizzlies (even though you will break my heart in a month)!

Losing Matthews for the rest of the year is a devastating blow for the Trail Blazers upcoming postseason run. Matthews’ offense will be missed, but his presence of defensive end is not possible to replace. Elite backcourt players are going to dominate those matchups every night since Damian Lillard is a below average defender, and Arron Afflalo doesn’t fair much better on that end of the floor. The Blazers have played solid defense without Matthews, but keeping guards from penetrating is key to defending three pointers (an ace in the hole for today’s game).

LaMarcus Aldridge is still doing his thing and is a tough matchup for every team except the Spurs and Grizzlies. The Blazers’ ceiling was much higher with Matthews in the lineup. Next year’s roster is likely to be very different since Aldridge and Matthews have contracts that expire at the end of the season. It’s possible that everyone comes back, but the NBA is a business first and leverage is all about results.

If the Blazers make it out of the first round, Aldridge could feel better about the team’s future and the front office will believe Matthews is more expendable. In the other scenario, Aldridge is more likely to leave for greener pastures, and the team will value Matthews more.

There’s no stat for this, but the Mavericks are probably second in the league for calling each other out for effort and attitude issues (first place belongs to the Cavaliers). The Rajon Rondo trade has been seen as a catalyst for their issues, but the Mavs’ defense and rebounding were problems before his arrival. Dirk Nowitzki‘s brilliance smoldered potential turmoil in past seasons, but his slow decline has unmasked problems that were always there.

Dallas has signed journeymen and mercenaries on one to two year contracts to stay in contention from year to year since their title in 2011 because they have missed on the biggest free agents (Dwight Howard, Deron Williams, etc.). The chemistry among the players is missing as well as the comfort level with Rick Carlisle, one of the best coaches in the league.

The Mavericks are capable of great things despite a disappointing regular season, but they have to remain focused.

Westbrook had 316 turnovers in the 2010-11 regular season (35th worst all-time), averaging out to 3.8 per game. In sixteen less games this season, Westbrook will nearly equal the total from 2011-11. Westbrook is as headstrong as ever. Sometimes a good thing, sometimes bad.

I covered the Thunder in Monday’s No Layups. Check that out for my whole take.

We have seen all of these matchups before, two in the first round last year. Shrug, I’m not doing it over. Deal with the truth.