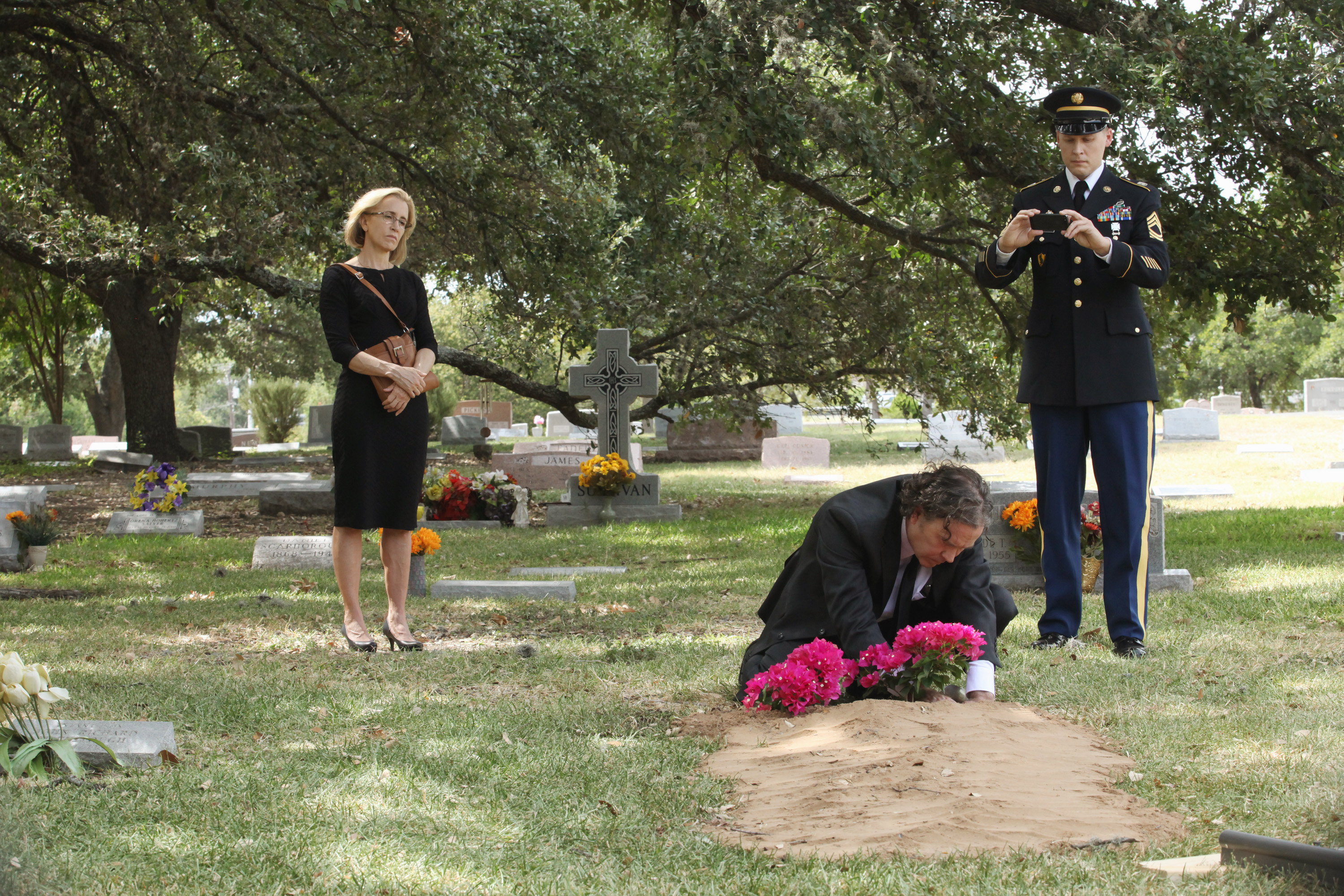 American Crime begins its fifth episode with Russ visiting the home where his son was murdered. It’s an overwhelming, borderline debilitating experience for him. Mark accompanies Russ, telling him he can wait outside if he chooses. The audience is given an inside look into the blood-stained walls that fill the interior. American Crime then shifts to a different location where we see Matt’s dead body. This scene is one of the show’s strongest opening scenes thus far.

Carter builds off his momentum from last week by being granted bail. After the judge reads him his limitations, anything from avoiding excessive alcohol to not fleeing the area, Carter agrees to follow the rules. Aliyah posts her brother up in a spot that’s an upgrade from his usual quarters. For the first time since Aliyah entered the series, Carter attempts to open up. He states how he could use a family dialogue with his sister, not someone who simply changed her name.

Meanwhile, Aubry is revealed to have been sober for roughly a week. This is a graciously accepted piece of news for her father. It’s shown to be an act a scene or two later. The second she’s escaped from her father’s grasp, Aubry buys alcohol on her way to visiting Carter. They embrace, truly in love despite their undesirable places in life, and talk about the first time they met. Carter’s sister will never be able to loosen the grip Aubry has on his life. The same applies to Aubry’s father who is meaningless to her compared to Carter.

My favorite character on American Crime might be Hector. He doesn’t always receive the most airtime, but his scenes are among the most powerful. It’s easy to recall Hector’s torment from last week when his face was slashed. A less painful, more frustrating torment occurs when Hector’s lawyer is unable to help him. Hector will only speak or open up if his case can benefit. As he angrily states, he won’t do anything for free.

Like Hector, Tony has also been made into an angry young man because of recent circumstances. He’s shown to be at church with his sister and father. As they depart, Alonzo happily tells his children that he’s been able to recover the car possibly used in Matt’s murder. Alonzo anticipates a favorable reaction, one that can maybe help mend the void with his son. He receives an outburst of anger instead. Tony calls his father stupid before storming off in fury. The family is made angrier once they’re kicked out of church for Sunday Mass because of the negative publicity. Bad news continues when Tony’s sister is assaulted by a local coward.

We later turn back to Russ, Barb, and Mark. Russ tidies up Matt’s burial site, revealing to us that the deceased has been buried in Oakland. One of American Crime‘s central rifts was the familial disagreement concerning where to bury Mark. Once that’s been settled, Mark asks Barb if their family will ever be normal. In her trademark matter-of-fact tone, Barb basically tells her son how that’s never been the case. Their family has never been normal. It never will be.

Terrible decisions are made by two key characters. The first is Tony, a naïve teenager who foolishly calls a contact given to him by a friend in juvenile hall. The individual picks Tony up in a car blasting music throughout the community. One can only imagine the potential mistake Tony has made. In a similarly stupid fashion, Aubry cuts off Carter’s ankle monitor. Her plan is to escape with her lover to Vietnam. Carter seems initially hesitant, but eventually agrees to his girlfriend’s plan. They later backtrack after Carter realizes the monumental stupidity of the idea.

The most shocking moment is predictably saved for the end, and it involves Carter and Aubry. The pair are back in their comfortable area after returning from that horrid escape plan. Despite Carter’s recent sobriety, Aubry’s desire to get high is stronger than ever. But they walk into a nightmare as one of the dealers they meet is a man Carter ripped off in the past. The clutches of Aubry’s addiction has been a mammoth force throughout American Crime.

This leads to a scuffle, one where Aubry slashes the throat of a dealer, presumably killing him. The instantaneous nature of this violent episode is similar to when Hector’s face was cut last week. Aubry is relatively unfazed by the blood on her hands. Thinking of his legal situation on top of his girlfriend’s unnecessary murder, Carter is shaken by the event. His feelings shift even further once Aubry overdoses on her mountain of drugs. As her livelihood is put on a cliffhanger, Carter’s criminal standing is about to become far worse.

In American Crime‘s recent episode, a certain momentum is gained that didn’t formulate in the past. The pace is slicker. There’s less chopped up scenes full of questionable camera movements. We also see Gwen fully awake to see a video Mark filmed of Matt’s grave. Russ develops a connection with a coworker. Mark tells Barb he’s engaged to be married. These subtle moments nicely work alongside the more powerful scenes such as Hector’s outburst toward his lawyer, or Russ visiting the cold confines of Matt’s home. For a series of reasons, this episode might stand as American Crime‘s strongest.