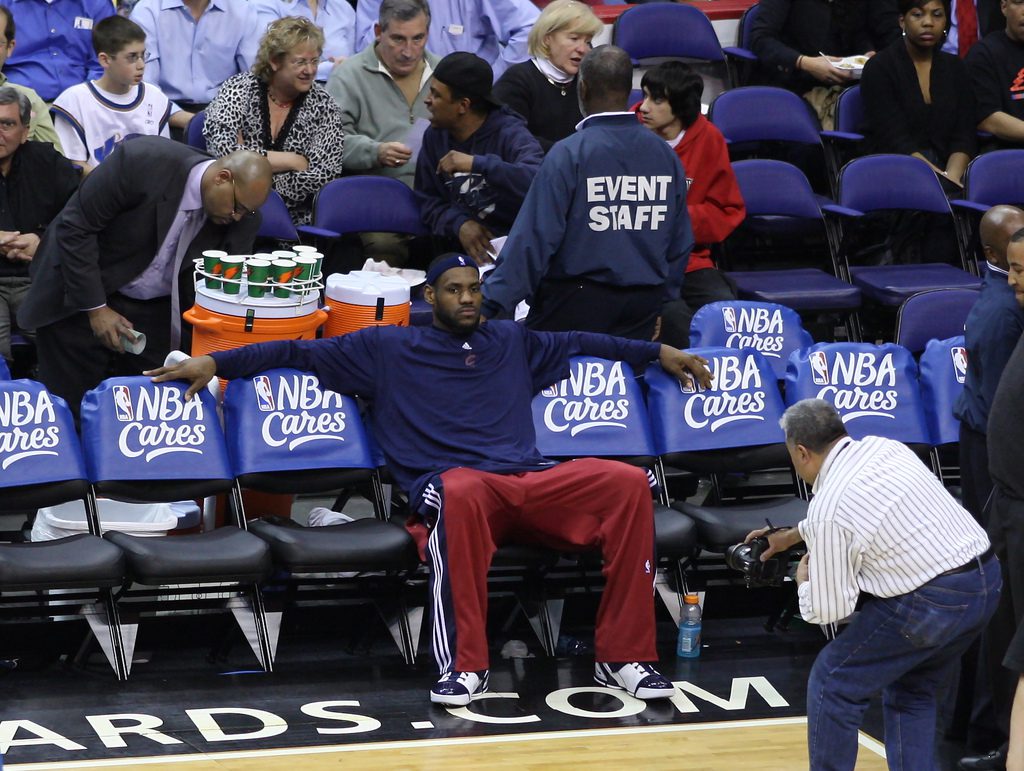 Sports folk have incredibly short memories. Fans, pundits, players, and front office employees are like the physical manifestation of Jay Z’s Volume 2 classic track, “A Week Ago,” – a guy is either the toast of the town, or the reason (insert your team here) can’t get over the hump. LeBron James is today’s best example of these extreme swings in sports narrative. He joins the Big 3 in Miami and he’s the villain. He returns home, molds the roster to his liking and he’s a hero. The devil is in the details for why those reactions occurred, but some athletes can’t take a microcosm of that pressure, just look at what happened to Vince Young. With that in mind, we can’t ignore that James nearly imploded the Cleveland Cavaliers this season.

The MVP is not a legacy award although many will argue that it should be. Check out what Cavaliers guard J.R. Smith said to ESPN’s Dave McMenamin on the James’ MVP candidacy a few days ago.

“In actuality, if you really wanted to, you could give it to him every year,” Smith said of James, who won the award four times in his first 11 seasons in the league. “I mean, the numbers, what he does for teams. You see one year removed from a team like Miami — and they probably won’t even make the playoffs — to a team that hasn’t made the playoffs since he left and then, all of the sudden, we’re a 52-win team. So I don’t think you can do that with anybody else that’s in our league right now.

“Not to knock anything from the other two guys [Stephen Curry and James Harden]. They’re having great years, career years for both of them, but if you want to be realistic about it, you could give it to him every time.”

There are a lot of flaws in this argument, but let’s stick with the most relevant point for this season:

On New Year’s Day 2015, the Cavaliers announced that James would miss two weeks with multiple injuries. The team struggled mightily before James’ two week absence and lost five of the six games he missed, including ten out of twelve overall dating back to the Christmas Day lost at the Miami Heat. James returned when the team was 19-19, good for a .500 winning percentage. The team was actually cracking before that period too.

LeBron James was arguing with Kyrie Irving in the first week of the season so publicly that the media got wind of it. James was literally pouting on the court and everyone was writing about it. Dion Waiters was embraced by James at the start of the season, but was being waved off two months later.

Two major trades would take place during LeBron’s two week sabbatical that changed the team’s fortunes: a three-team trade that brought in much needed backcourt depth via J.R. Smith and Iman Shumpert, and the acquisition of Timothy Mozgov from the Denver Nuggets for two first-round picks. The Mozgov trade is pretty straightforward and a fair trade for both parties. The three-team trade however really takes a massive amount of ineptitude from two other parties.

The trade reported earlier involving CLE, NYK, and OKC has been made official. Who won the trade? pic.twitter.com/E5KoRxG30f via @NBAITK

In what world did that make sense for the Thunder or the Knicks? The Thunder strengthened a contender and got a ball-hogging guard who throws temper tantrums on the court when he doesn’t get the ball (as seen in the Vine above). The Knicks got a bag of peanuts, some cap space, and a box of authentic Cleveland snow for their two best trade chips.

James could have come back after two weeks like he was in his early-twenties again, but the Cavs had no shot at winning the championship with the roster as he left it. Those two trades are what made the team a 52-win team. Since February 2, the Cleveland Cavaliers have the best record in the Eastern Conference!

The two best teams in the East the last two months will meet in the first round. pic.twitter.com/vnvwRnjBkI

Right above the Boston Celtics and Indiana Pacers… Man, the East is bad. That doesn’t mean James sucks or doesn’t deserve credit for pushing the team to its potential, but he was not able to get the team to work with a roster he basically constructed himself in the offseason, bringing us to the last point: Why is James so mean to Kevin Love?

The on-court issues for Kevin Love are well known and mostly ignored now that the Cavaliers have been playing well. What has completely blown me away is the way James keeps taking shots at Love.

Stop trying to find a way to FIT-OUT and just FIT-IN. Be apart of something special! Just my thoughts — LeBron James (@KingJames) February 8, 2015

This tweet was referencing a quote from Kevin Love back in October when he discussed how to gel with his new teammates. Again, courtesy of ESPN.

“I’m comfortable and just not trying to, I guess, fit in so much,” Love said after the game. “I had a talk with the guys on the plane ride over (to Brazil) and also at different practices off the floor and they told me to fit out. Just be myself.

“I kind of laughed and smirked at that. Off the court, I never have any problems with that. But on the court, it’s just us having so many weapons and being able to fit together out there on the floor … You always say check your egos at the door but we also need to bring our egos with us because that’s what makes us so great. We wouldn’t be here without them.”

Very fair assessment by Love. Super passive-aggressive tweet by James months later. It would be boring if I went through all of the times this year that James has called out Love on social media, but it is important to bring up because Love will be the one blamed if things go wrong in the playoffs, right or wrong. James has already won championships. Irving has been allowed to do whatever he wants on the floor. Love is the odd man out in the corner waiting on the ball, daydreaming about when pundits called him a top-five player in the league. He is not re-signing with the team, not that it matters because another shortsighted general manager will accidentally help out the Cavaliers in the offseason.

James is still an amazing player, probably still the best in the world, but he does not deserve the MVP. Others have done more with less against much more difficult odds this season. He is still the king but don’t let history be re-written to say he did everything right this year. He deserves fair criticism just as everyone else does.