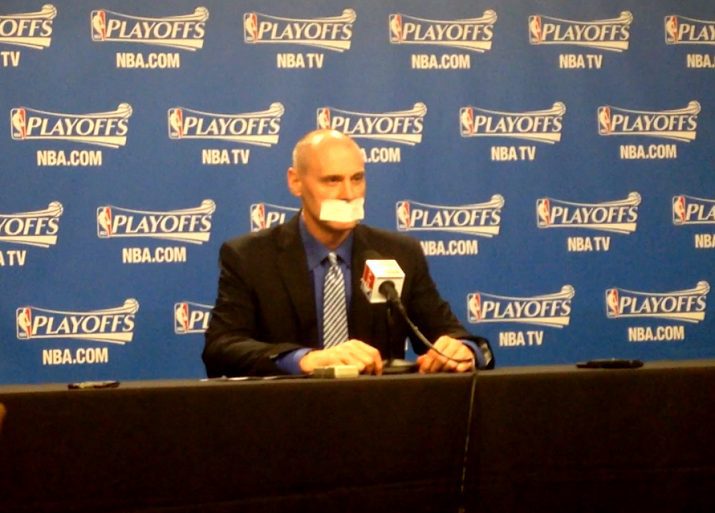 Following Friday’s win over the exasperated Dallas Mavericks, Houston Rockets’ Jason Terry casually announced to Brad Townsend of the Dallas Morning News that he would wear “black on black” to Sunday’s essential Game 4, the customary colors one would wear to a funeral. Obnoxiousness aside, Terry was preparing to complete the sweep in front of a stubbornly disobedient Mavericks home crowd at the American Airlines Center, and perform the Mexican hat dance on Dallas’ playoff grave.

The Mavericks, mainly J.J. Barea, Monta Ellis, and Al-Farouq Aminu, had other plans.

Throughout the dreary day, random sirens sounded in selected cities warning Texans of an appending tornado and violent storm. Turns out, the coruscating flashes of light that shot through the lilac purple clouds of the Southern sky only mirrored the sheer power of the Mavs as they desperately fought to overcome Terry, his mourning suit of narcissism, and his Rockets 121-109.

Dallas attacked early on in the first, but struggled from the field, only shooting 50 percent to Houston’s 68.4, which resulted in the Rockets taking an early 34-25 lead going into the second quarter.

“That’s our biggest thing, just keep attacking,” Ellis, who scored 31 points for Dallas, said to the press following the much needed win. “Get to the paint, when we get to the paint we make a lot of things happen. Just gotta continue to stick with the game plan: attack, attack, attack and we’ll get the stops on the defense.”

Barea was one of the keys to both starting, and closing, out the game. The point guard finished with 17 points and a whopping 13 assists.

“He’s just got a really good feel for pace,” Mavs’ head coach Rick Carlisle said of Barea. “He’s attacking and mixing up attacking to score, and attacking for paint kick-outs to other guys.” Barea helped the Mavericks go on a 20-2 run during the third, a quarter they’ve been notoriously known for blowing during the regular season.

But where there is lightning, there’s the chilling boom of thunder. Unfortunately, this came in the form of not James Harden or Dwight Howard, but in the shape of the officials. Questionable and plainly obvious calls favored the visitors in red while leaving the Mavericks out in the heated rain (Dallas had 52 fouls and five technicals counted against them). The irony wasn’t lost on Carlisle, who had been fined 25k for openly calling out the officials after Friday’s loss. This time, he came prepared.

“You asking me a question about the officiating?”

Smirking, Carlisle picked up a piece of tape that rested next to his unofficial scorer’s report. “I brought something just for that,” he said slyly as he put the tape over his mouth. “Look, it’s a physical series – they’re a physical team, but we stood up to it,” he said after removing the tape. “We stood up to it tonight, and held our ground, and that’s what we’ve got to do.”

Another factor that slowed down the Rockets’ offense while beefing up his resume on the other end of the court as well was Al-Farouq Aminu, who recorded his first post season double-double.

But in the end, it all came down to rebounding. Dallas won the battle this time by outrebounding Houston 52-38.

“They beat us on the boards bad,” Rockets coach Kevin McHale said. “They (had) 20 points off of offensive rebounds and we had 4.”

Ellis and the rest of the Mavericks weren’t about to give Terry the satisfaction of rolling over and dying, therefore justifying his tacky passive aggressive jab by way of wardrobe.

“All the guys in the locker room came together and said we were going to leave it out on the court and we did.”

Game 5 moves to Houston and will be broadcast on TNT, 8 PM Eastern Time.