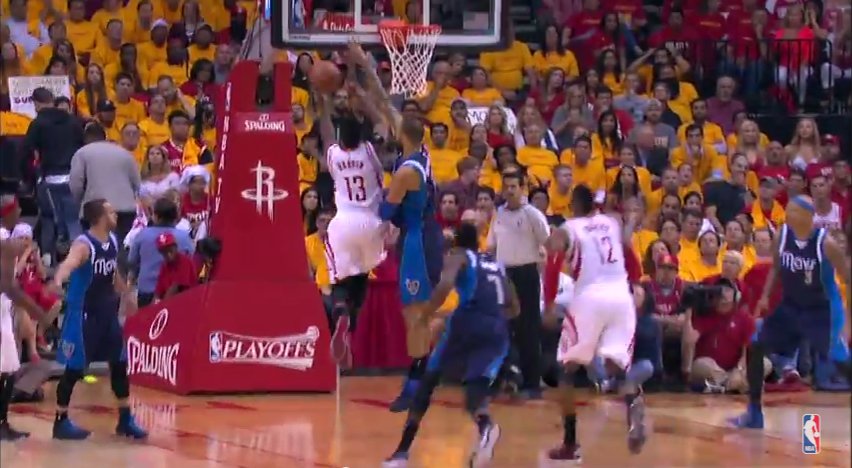 There was a chance, they said.

But not much of one, they warned.

Nevertheless, it’s still there for the taking.

During the final seconds of Game 4 between the Dallas Mavericks and the Houston Rockets when the former was up by over 10 points, the image of this coveted goal became embedded inside the heads of Dirk Nowitzki, Monta Ellis, J.J. Barea, coach Rick Carlisle, and the rest of this ragtag team of so-called misfits: No team in NBA postseason history has ever come back from 0-3 to move on to the next round, but, yet, the Dallas Mavericks were a few stone throws away.

Dallas, a veteran team blinded by the 2014-15 season spotlight thanks to a particular sullen former All-Star point guard, were surfing on a high after that very 121-109 Game 4 win over the Rockets on Sunday. It was time to throw away conventionality, look beyond the obvious injuries, shut up the critics.

The mute button however, going against the underdog, had other plans.

There were moments of utter hope that slid slightly along the skin of Mavericks fans causing those vivid goose bumps, but during the final five minutes of Game 5, the light of the Finals was snuffed out. Dallas metaphorically collapsed to their knees, handing the first round over to their seasonal arch nemesis while walking away with a brutal 103-94 loss.

The Rockets unleashed James Harden, Dwight Howard, and Josh Smith in the first quarter as Monta Ellis and Al-Farouq Aminu attempted to fend off the home team solely on the offensive end, Aminu more than earning his permanent place with the big D squad by dominating the rim. Not much could be said for Nowitzki, who was 0-of-4 from the field at the start of the game. The Mavs managed to be outrebounded 16-9 during the first quarter, something that seemed to be unheard of during Sunday’s game when they brutally owned the boards in terms of rebounding. The Rockets strolled into the second leading 31-22.

Within the final two minutes of the second quarter, the Mavericks started showing bursts of energy via Ellis (who laid down a brilliant and-one three-point play after missing four-straight baskets) who brought the Mavs within three, trailing only 49-46 with 1:06 remaining in the half. All eyes were on Dirk though, his exasperated shot failing him in the heat of the moment. He was only 2-of-11 from the field as his Mavs trailed 56-50 going into the half.

Momentum seemed to be lost in the desperate third quarter as Harden helped give his Rockets their largest lead of the night, the Mavs trailing by 14, 75-61 with a little over five minutes remaining. The offense for Dallas looked every bit their veteran age, and began to cool at the worst absolute moment – a third quarter moment they have been all too familiar with during the regular season.

Dallas attempted to rally in the fourth and held on to hope as they started out the final twelve minutes trailing by only seven points, but the chill that seemed to ice them in the third overtook them in the fatal eleventh hour. Dallas was down by nine after Houston went on a speedy 6-0 run with only 4:26 remaining before Aminu, playing with five fouls, hit two crucial free throws, cutting the Rockets’ lead to only 94-89.

Reality managed to slice Dallas in half at the close of the fourth when the offense collapsed underneath the weight of all their regular season woes, injuries, and experimental trades. Shots failed, sweat coated the floorboards, and veterans took to their knees as they witnessed Terrence Jones dunk off of a Harden steal and feed, leading a desperate Carlisle to call a timeout with 1:09 left in their collapsing season.

Youth prevailed, and the Rockets took the game 103-94, advancing to the second round of the Western Conference.

With all their vigor and determination, Dallas fell to the higher seed during this first round, history slipping – once again – from their ever reaching grasp.