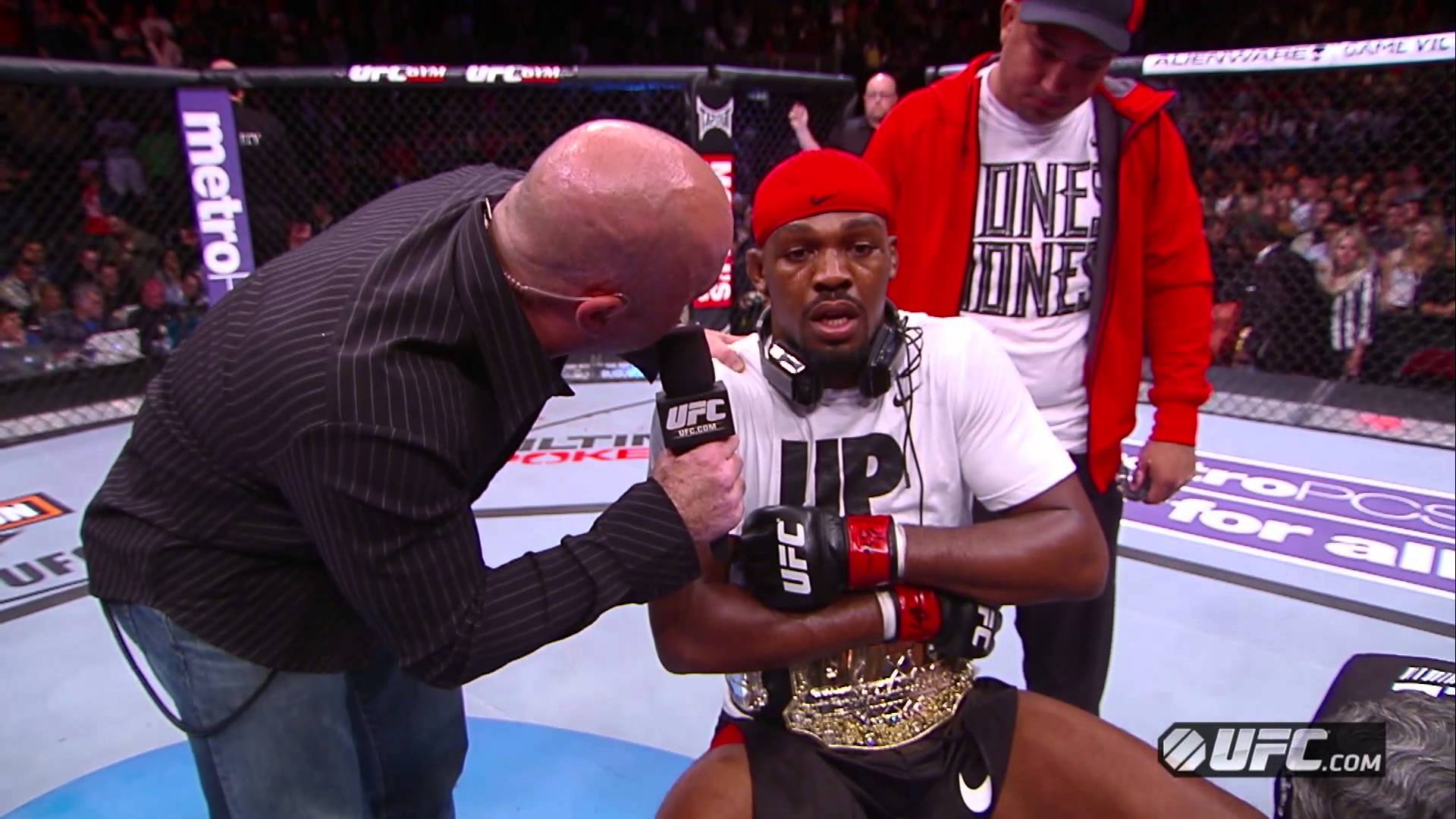 January 3, 2015. That date is extremely significant to a certain UFC champion. It was the last time a positive thing happened in the public eye for Light Heavyweight Champion Jon ‘Bones’ Jones. He beat Daniel Cormier by unanimous decision in a well fought, immensely promoted five-round battle. Jones showed a lot of public emotion after the fight even shedding tears in the ring, at the time it was of course do to the months of training and mind games that led up to quite a fight at UFC 182. Now those tears can be interpreted as remnants of pain coming from a troubled man who was about to begin one of the biggest falls from grace in recent professional fighting history.

The unimaginable high of a title defense did not last long for Jones. The following day news broke that a December 4th drug test leading up to the Cormier fight came back positive for traces of cocaine, a big blow to the 25-year-old champion who was the face of his sport and had many big sponsors like Gatorade. The support from the sports drink giant meant even more to Jones at that point because he had just split ties with Nike in the Fall of 2014 due to press day brawl between Jones and Cormier. All of a sudden, Jones was in as bit of a predicament with sponsors threatening to cut ties thus costing Jones millions. MMA fighters do not get paid the likes of boxers or ball players so this is crucial to a fighter.

Sensing a blow to the wallet, Jones was in immediate damage control. On January 5 “Bones” announced he would be checking himself into a drug rehabilitation program due to a cocaine addiction, a very wise public relations move for the given circumstance. The next day, Jones was enrolled in an  unnamed rehab center. This prompted UFC president Dana White to back his champion in a statement. After all, who wouldn’t? Jones was doing the right thing by attacking his addiction problem head on while remaining the Light Heavyweight Champion. The story could have become an inspirational one. Until the following day…

January 7, 2014 will be the anniversary of the most amazing bounce back from addiction in history. Jon Jones checked himself out of rehab in what seemed to be a miraculous 24 hours recovery from his drug problem. Of course no rational person believed his addiction had been solved, but Jones again showed his lack of common sense, making a mockery of the system. Those rational people including his two well-known brothers; Arthur Jones defensive tackle for the Indianapolis Colts and defensive end for the New England Patriots Chandler Jones. Whatever the case was Jones was out of rehab and mended relations with his sponsors and fighting syndicate. Things went quiet out of the Jones’ camp for anything other than training and good PR, but an entitled maniac like Jones couldn’t stay quiet for too long.

On January 24, Alexander Gustafson and Anthony ‘Rumble’ Johnson, two UFC juggernauts, squared off to see who would get a title shot versus Jones.  Johnson won in a first-round knockout, catapulting him into No. 1 contention for the belt. The fight was set, “Bones” vs “Rumble” for the Light Heavyweight Championship at UFC 187, May 23 2015. A great matchup of styles and the UFC’S way of competing with the “fight of the century” between Floyd Mayweather and Manny Pacquiao on May 2. What could go wrong for Jones?

February and March proved uneventful months for Jones. His social media accounts featured pictures of his home life including his two daughters. In the eyes of an onlooker, everything was perfectly normal as a wonderful family man preparing for battle to defend his championship. All the while the devil on his shoulder screaming at him to get out and cause mischief. At some point on April 26 that devil would get his way.

Albuquerque Police were dispatched to a motor vehicle accident involving two vehicles. The operator of one vehicle had fled the scene on foot, the second was a 20 year old pregnant woman. The police would enter the vehicle to further determine ownership of the vehicle. Upon entrance they found a marijuana pipe among other drug paraphernalia. They also found papers with Mr. Jones names all over them which resulted in a two day search for the whereabouts of the champ.

The police showed their amazing wherewithal to reduce the amount of resources used to find one person. They simply posted a letter to Jon urging him to turn himself into the police station. All day on the 27 of April this letter was ignored and Jones remained at large from the law. The UFC released a statement on the same day saying they “recognized ” that Jones was currently evading local police and were awaiting the facts.

The facts? The fact is a man with extensive drug history and a prior DWI hit a young, expecting mother and did not even have the intestinal fortitude to stick around and own up to his actions. Jones has managed to put his career and well being, along with the well being of others, in jeopardy in less than a six month span.

In the wee hours of April 28, Jones finally turned himself into the Albuquerque police department as a suspect in a hit and run. With more news to surely surface in the coming days and weeks about Jones, this is certainly just the beginning of the evaluation of Jones’ lifestyle. All of this puts extreme pressure on the UFC and its president Dana White.

If Jon Jones was just a dime-a-dozen fighter it would be easy. Thanks for coming, see ya later, buh-bye. But he’s not, he is a 25-year-old champion who turned into a money making machine for the UFC. He has been one of the fighters on the front lines of the fight to bring MMA to the mainstream. White had a hard decision to make.

If he were to suspend Jones, the light heavyweight championship would be vacated and it would certainly be precedent for the sport, sending a clear message about the UFC’s stance on drug abuse. After so many instances of the Jones’ problem, did Dana White have much of a choice? Anything less than a suspension would send the wrong message to fans.

Kudos to the UFC for doing the right thing. Jon Jones was stripped of his title and suspended indefinitely.  He will be replaced by Daniel Cormier in the upcoming pay-per-view against Anthony Johnson. Hopefully Jones can get his life back on track for himself and his family after his amazingly fast fall from grace.