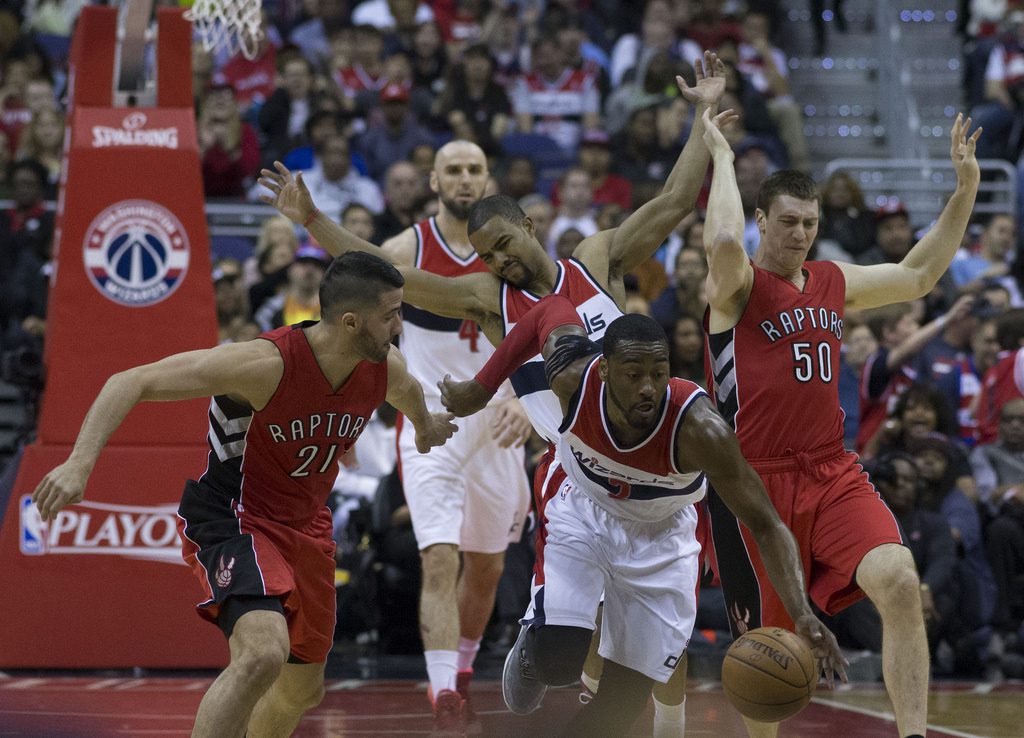 And just like that, as their name suggests, the Toronto Raptors are extinct.

Although the series itself was painless enough, being swept in four games, Sunday night’s match was an embarrassing 48-minute drubbing from start to finish.

The game itself was over in essence by half-time. It was then really over at three-quarter mark. Wizards fans were the first to help in the paleontological dig of the Raptors’ remains by bringing brooms along to the game.

While Sunday night proved an opportunity for the Wizards to gloat (and develop very lofty aspirations for their team), this series probably says a lot more about the Raptors than the Wizards.

Remember: this was a franchise that was trying to blow it up just over 12 months ago when they famously dumped the antichrist of analytics, Rudy Gay, in a midseason trade with Sacramento.

What happened next was somewhat of a revelation (kind of in the vein of what happened with Detroit when Josh Smith was waived earlier this season). The Raptors started winning.

It wasn’t exactly explainable, but it happened. They went 10-4 after Gay was banished and then went on to seize the Atlantic Division for the first time since 2007.

The Raptors Renaissance was one-part ball movement and another love of the game. There was romance on the Raptors squad.

To put that into perspective, a year later, in the first round against the Wizards, Ross had just 28 points in four games.

You see, the Raptors weren’t meant to be this good, this soon. Even after the Rudy Gay trade, General Manager Masai Ujiri hinted that the goal was still long-term.

But how could you argue with the intangible success as chemistry oozed?

So, in the offseason the resigned their emotional leader, Kyle Lowry, to a 4-year $48 million deal and brought in Lou Williams and James Johnson while keeping the ragtag “core” they had created in dumping Rudy Gay, intact.

Early on, it worked. The Raptors jumped to a 13-2 record and were the hottest team in town at the start of the season. Toronto benefitted from a shoddy Eastern Conference, catapulting to the top of the standings.

Problems on the defensive end were covered by the team’s explosive offensive, but not only did the system not work so well, but neither did the pieces really fit.

The offense deteriorated into a series of mid-range jump-shots, the continuity, the fun had been all but lost. This roster as it stands has come to a sudden and abrupt (albeit not surprising) end.

This summer, the Raptors will have to decide what to do with a number of pieces: does Terrence Ross fit in with the future?, is DeMar DeRozan a true ‘franchise player’?, what will become of Jonas Valanciunas? and what about head coach Dwane Casey?

The Raptors have intriguing pieces. They would surely garner interest around the league and could fetch value in return. They just don’t fit together.

They say ‘seeing is believing’ and that certainly was the case for this bunch of overachievers in 2014-15. The Raptors had a successful run but maybe this was the series they had to have. Last year’s Game 7 loss meant there was enough here to give the team another go-around. After a four-game sweep this year, the same can’t be said again.