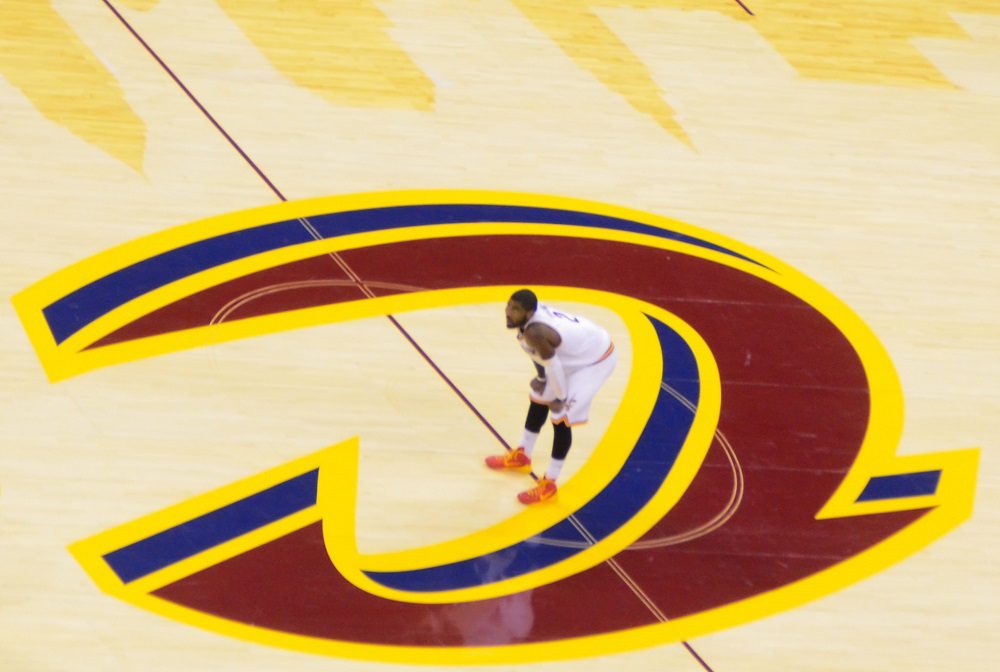 The 1st Round of the NBA Playoffs are nearly a wrap AND it’s Friday, so that means it’s a perfect time for my weekly evaluation of whose stocks are on the rise and whose stocks have fallen. And as a reminder, I don’t have any sort of knowledge of the workings of the stock market. But if there were an actual NBA Stock Market, you might as well call me Dow Jones. Is Dow Jones a person or a thing?

For back to back weeks, Rajon Rondo stock has not just fallen … it’s plummeted to epic proportions, and now it’s only a matter of time until it comes crashing to the ground. Rondo stock is so low right now that even the bumbling Los Angeles Lakers, once considered the most likely home for Rondo next season, are reportedly “torn internally” as to whether Rondo should be pursued in the offseason. A healthy Rondo was borderline unplayable against Houston in the 1st Round. How are teams supposed to evaluate the current version of Rondo, one that had to be sidelined for the remainder of the Playoffs due to a back injury?

Wait a second, the back injury was just a full of crap story? His back wasn’t even injured? The Mavericks players and coaches just didn’t even want to be in his presence, so he was sent home?

So to recap, the current version of Rajon Rondo is a point guard who can’t shoot, can’t score in the paint, can’t shoot free throws, can only really be a factor offensively if the ball is always in his hands AND it turns out he isn’t a guy you want hanging around in or near your locker room. Well then!

For the time being, there isn’t a powerhouse in the Eastern Conference. Atlanta still has work to do in their dog fight with the stubborn Nets, Chicago looked very beatable in Round One up until Game 6 where they turned the upstart Bucks into Bambi’s mother, and Cleveland is currently dealing with a litany of their own issues (coming up in a jiff). Maybe it’s time to start wondering, “Why not Washington?” The Wiz are probably the healthiest team left standing in the East, and they absolutely beat the intestines out of the Raptors in the 1st Round. Even still, it relies on a lot of “if’s”:

If John Wall is about to have a breakout postseason (I wouldn’t be surprised if he was), if Bradley Beal can really be a reliable second banana to Wall (I would guess that he’s ultimately better off as a third option), if Otto Porter continues to have a pulse (he didn’t during the regular season), if Marcin Gortat plays like a $12 million per year center (he did in Round One), and if Paul Pierce‘s continues to shoot 113 percent in big moments (THAT’S WHY HE’S THERE!), then the Wizards can make some serious noise. Then again …

It’s not quite on the level of the Corona Lights Stan commercial or Geico’s Pillsbury Dough Boy ad yet, but the Taco Bell Steak DoubleDilla commercial is this year’s winner of the Most Frequently Played, Yet Least Annoying Advertisement Of The NBA Playoffs Award. Watching Brandon and Rachel Kuzma, two grown human beings, cheering for Taco Bell just like they did for a Nintendo 64 sixteen years prior is something that always makes me laugh and will forever make me hungry.

I’ve never been a huge Deron Williams fan, but it’s always nice to see guys who were once stars find their form every once in a while after their time has past. In D-Will’s case, it hasn’t totally been explained why he lost it so fast, but he did, so when he brought some life into the usually lifeless Barclay’s Center with a 4th quarter takeover that included one of the all-time great I’m gonna pull this shot out of my ass end of shot-clock three pointers, it was a moment. And yes, I blatantly ignored the fact that Williams recklessly opted to take a forced fall-away jumper with six seconds left and the game tied rather than holding for the last shot in the 4th quarter in Game 4, but hey, the Nets won so I’ll give him a pass.

Who thought a 4-0 1st Round sweep could end up being so damaging for the team that won? Here are three Game 4 fueled observations that really worry me as a Cleveland Cavalier supporter, in order from least problematic to most problematic.

a. Granted, I don’t know the exact question that was asked to him, but Kyrie Irving said after Game 4 that it “was the most physical game” he has ever played in. While that may be true, it’s only going to get rougher and I have my doubts that the oft-injured Irving can handle the postseason grind.

b. Thanks to a knockout punch to Jae Crowder that would make Floyd Mayweather and Manny Pacquiao proud, J.R. Smith earned himself a two game suspension that Cleveland absolutely can’t afford. Of course, the Love injury (coming up soon) is the biggest blow, but playing the first two games of the 2nd Round without Smith means David Blatt might have to break out the Swiffer and dust off Mike Miller, James Jones, or Shawn Marion so they can be ready to play for meaningful stretches here and there.

c. Kevin Love is out for the playoffs and even if you’re a hardened Love detractor (I’m not one) you at least have to admit that (a) he’s one of seven players in the league who averaged 16 points and 9 rebounds per game, (b) even if the numbers are down from past seasons, he’s still one of the five best power forwards in the league, (c) in many ways Cleveland has badly misused him and taken away a lot of what makes Kevin Love great by using him almost exclusively as a spot up shooter, (d) even though Cleveland hasn’t found the best way to maximize Love’s talent, his presence alone makes Cleveland a better shooting and rebounding team than they would be otherwise and (e) Love’s presence makes life so much easier for every other Cavaliers player, particularly LeBron James.

Without Love, LeBron has to play power forwards defensively because Cleveland absolutely cannot close games with Tristan Thompson AND Timofey Mozgov on the floor at the same time. Without Love, an already thin rotation becomes thinner and minutes are going to be given to washed up vets like Jones (12 minutes per game during the regular season), Miller (14 minutes per game) or Marion (19 minutes per game, and he hasn’t played a single meaningful minute since mid-December). Like I said before, I’m worried.

I’d pay $50 to always have the beard that Spero Dedes has.

You can’t be one-dimensional offensively and beat the Warriors in a series; I refuse to believe it. Teams that are multi-dimensional will have a tough enough time against the best defense in the league. Without point guard Mike Conley, who suffered a brutal facial fracture in the 1st Round, it’s going to be a bitch for Memphis to muster enough points to last long in this series. Memphis still has enough guys to act as a thorn in the collective side of the Splash Brothers, but counting on Beno Udrih, Nick Calathes, Tony Allen, or Courtney Lee to make up for Conley’s production, and more importantly, his point guard IQ, is unrealistic.

There isn’t anything better than a Game 7, and what has transpired over the first six games in this series leads me to believe we’re in for a classic tomorrow night. So far, four of the six games have been won by the road team. Two offensive goal-tending calls have swung games. Tim Duncan continues to appear to be an alien who, despite playing on one leg, remains just as effective on a per 36 minute basis as he has at any point in his career. Blake Griffin has played the series of a lifetime (24 points, 13 rebounds and 7 assists per game so far), yet he’s a Game 7 loss away from only being remembered for a Game 2 turnover and a disastrous 4th quarter in Game 5. Marco Belinelli, Patty Mills and Austin Rivers have all had their moments. And we all know what will happen to Chris Paul if the Clippers don’t win Game 7.

I can’t even attempt to predict how Game 7 will turn out because momentum means nothing and it’s going to be decided by three or four big shots and just as many lucky bounces. However, I can give you some advice. Buy a lottery ticket tomorrow. Just trust me. We’ve got Spurs at Clippers tomorrow night at 8 o’clock in a Game 7. How many times do we get that lucky?