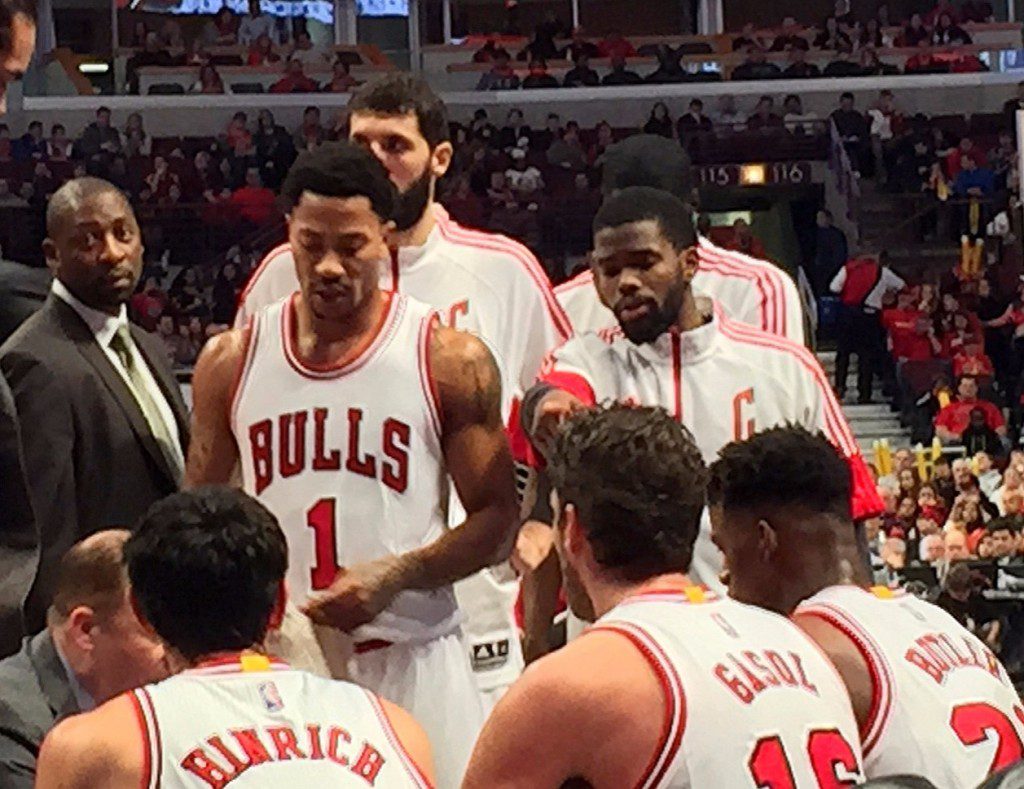 Without question, the most anticipated matchup of the young NBA postseason is the Cleveland Cavaliers against the Chicago Bulls. Unbelievably, the Bulls have a fully healthy roster for the first time in three seasons. With Derrick Rose back to playing major minutes and forward Jimmy Butler blooming offensively right in front of us. They look ready to take the postseason leap the city has been waiting for.

For Cleveland, the tough loss of Kevin Love is sure to affect them somehow. The absence of Love may have been covered up better if that was the only starter they were missing but, it’s not. J.R. Smith stupidly took a swing at Jae Crowder in Game 4 of the series with the Boston Celtics, leading to a two-game suspension for Smith and more adversity for the rest of the Cavaliers to overcome. Any other team in the situation Cleveland is in would surely be counted out of a series for sure. Except, for a team with Kyrie Irving and LeBron James. A team with those two players is never out. Should make for an entertaining series.

Mike Miller replaced Smith for the Cavs, and with LeBron shifting to the power forward position, Iman Shumpert shuffled his way into the starting lineup as well. Proving himself valuable by hitting the first shot for the Cavaliers.

The size advantage of the Bulls was imminent early on and Cleveland looked to combat that with speed and floor mismatches. That tactic wasn’t working as the Bulls pounded the paint to jump out to an eight-point lead, forcing Cavs head coach David Blatt to call his first timeout of the game.

Jimmy Butler was proving his worth on the defensive side of the ball by keeping LeBron off the scoreboard early. But the story in the first quarter was the three point shooting of the Bulls. Rose, and Bulls shooting guard, Mike Dunleavy, led the way hitting five three’s between them in the first seven minutes of the game. Rose has struggled from deep as of late, so the early success for him could spell trouble for the Cavs throughout the series.

Just as in the series against the Celtics, Shumpert continued to be all over the floor for Cleveland, which would be valuable, because James would take his first seat of the game with 3:40 to go in the first and the Bulls up 13. A tough decision for a team that is already thinned due to suspension and injury. James must have recognized this because less than two minutes later he checked himself back in.

Dunleavy would continue to stay hot through the first quarter hitting all five of his shots. Ending the quarter with 13 points, helping the Bulls keep the lead at a comfy 12.

With the first quarter in the books, the Cleveland Cavaliers were absolutely missing Love and Smith, and the Bulls were gaining momentum behind the flawless jump shot of Dunleavy, the smart play of Rose, and the excellent defending of James by Jimmy Butler.

The second quarter had to go better for the Cavaliers after making only five of their shots in first. It did not start that way, as Chicago continued to abuse the Cavaliers in the paint, led by the superb passing of Joakim Noah, and a scoring spurt off the bench by Kirk Hinrich.

One had to wonder when James would stop looking for his teammates and start imposing his will on the Bulls. He seemed fatigued. The inactivity of James was becoming more and more relevant, and no one else on his team was stepping up to answer the ringing phone James was continuously calling.

The passing game of the Bulls was spectacular, reminiscent of last year’s San Antonio Spurs. But the Bulls’ lead was finally cut to single-digits by a superb scoring outburst by Kyrie Irving, finally making his presence felt with 6 minutes remaining in the half.

Other than Kirk Hinrich, the Bulls bench was quiet for the first half, but Rose would not allow his team to relinquish the lead. Rose against Irving ended up becoming the story of the first half. It began to look as if either team would go only as far as each point guard would take them. On the shoulders of a 14-point quarter, ending the half with 17, Irving kept his team close, heading to the locker only down five.

Shumpert continued his excellent play in the beginning of the second half, that, along with tough under-the-basket play by Timothy Mozgov, the Cavs finally pulled even with the Bulls. Almost as soon as the score was tied, the Bulls were back up ten on a run led by Rose and Butler.

With the lead ballooned to 15 for Chicago, it was as if things could not get worse for Cleveland. Right on cue, Pau Gasol, began to knock down the mid-range jumper that he had been missing the first half of the game. Around that time is when the frustration of the Cavs became visible.

Like a wounded animal, LeBron James, began lashing out at his foe. Getting to the line for the first time of the game and finding his open teammates. Suddenly, the deficit for Cleveland was only eight, and the bleeding began to clot by the healing hand of the King.

The Bulls’ bench began showing signs of life with a big three from point guard, Aaron Brooks, quieting the Cleveland fans, and silently ushering us into the fourth quarter with the Cavs down double-digits yet again. Was the King about to be beat on his court?

Aaron Brooks continued to hustle, winning loose balls and injecting energy into his entire team. All of this energy may have rubbed off on the Cavs, Irving especially. Just as the home team looked to have lost their way, young superstar point guard, Kyrie Irving, was trying to will his team into contention with an acrobatic layup and the foul. The and-one sent the crowd into a frenzy and the Bulls called their second timeout of the quarter.

Bulls sixth man, Taj Gibson, was beginning to bang down low, getting a few put backs and a giant trip to the line to stop a ten-to-two Cavs run. The momentum seemed to be in a limbo-like state. Either the teams were going back-and-forth with baskets, or no team was scoring at all. Irving isolations seemed to be working for Cleveland, and the high pick-and-roll was working for the Bulls. The first team to adjust defensively would be victorious. With five minutes of game time remaining, Chicago’s lead was four. What was once a one-sided game, was now sure to be close and entertaining in the closing minutes.

The Bulls seem to have an answer for James in Jimmy Butler, but it truly was a team effort, forcing James to travel and miss shots he would normally make. It was becoming obvious that if Cleveland was going to win, it wouldn’t be because of LeBron. His ineffectiveness and missed shots were hurting his team and with little time left the king direly needed his knights.

A game-ending dagger by Jimmy Butler was the only way to appropriate way to end this game. With easily the most-impressive performance by any player of this season’s playoffs, Jimmy Butler, was the player of the game. Perhaps more impressive than his own 20 points, was his fantastic defense on LeBron James.

It was a convincing road-playoff win by the Bulls, even with Irving and James combining for 49 points. The loss of Love was apparent from the get go, and the Cavaliers need an answer fast before the Bulls run away with this series. With Smith not returning until Game 3, Game 2 will be an extremely important game for the Cavs. A loss would send the series back to Chicago with Cleveland down two games to none. Uncharted territory for the King as a pro.

Tonight’s game can be summed up by one stat: This was the first playoff loss in LeBron James’ career that his team did not have the lead once in the game.