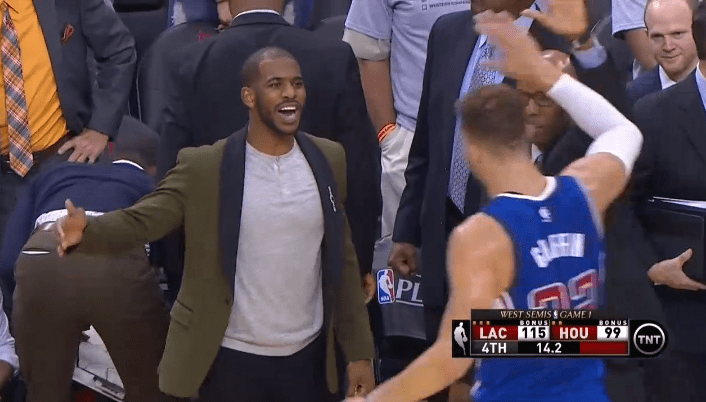 The Los Angeles Clippers had no business winning against the Houston Rockets in Game 1 of the Western Conference Semifinals but, somehow, they did.

The Houston Rockets may have prematurely been in a celebratory mood entering Game 1 against the Los Angeles Clippers, and why wouldn’t they be? Houston rested for about a week after defeating the Dallas Mavericks 4-1 in their series. The Clippers didn’t have that luxury as they battled in seven games against the San Antonio Spurs up until Saturday.

The Clippers were also without starting point guard, Chris Paul, still nursing a hamstring injury from Game 7, wherein, he scored the game-winning running lay-in. So how did the Clippers manage to pull off a 117-101 win at Houston?

Part of that was due to sloppy play from both teams. Though fans expected the rough and tumble playoff atmosphere of Clippers versus Spurs, they got Rockets versus Mavericks instead. The first half was swamped with turnovers. Each team had various different reason for those offensive maladies.

For the Clippers, the absence of Chris Paul affected the offense immensely. No longer left with the benefit of an on-court facilitator that can make his own shot at will, Los Angeles had to rely on Austin Rivers. Rivers, who started his first playoff game on Monday, was serviceable, but the composition of the Clippers was completely foreign in Game 1. It took a few quarters, but the Clippers finally got going, in large part to Rivers’ increase playing time. Rivers ended his night with 17 points, but only 3 assists.

Blake Griffin tried to make it his duty to incorporate the rest of his teammates, being one of the most skilled passing big men in the league; however, Griffin seemed to almost focus too much on ball distribution. Even in situations where Griffin had an open field goal fifteen feet away, he opted to pass to his teammates with unfortunate results. Still, Griffin managed to get his and then some, notching his third-triple double of the playoffs, with 26 points, 14 rebounds, and 13 assists.

For the Houston Rockets, their turnover issue was brought on by a luxury. Having swiftly defeated the Dallas Mavericks, Dwight Howard and company were privy to the accompanying rust. The Rockets assist-to-turnover ratio was near 1:1, with 24 assists and 23 turnovers. The Clippers had Houston right where they wanted by forcing them to shoot ill-advised threes and limiting their time at the charity stripe. James Harden, who is the NBA leader in free-throw attempts per game (tied with DeAndre Jordan at 10.4, but infinitely more effective) only shot 5-of-6. Over a third of Houston’s 24 attempts from the line came from Howard who shot 4-of-9.

Despite being down for most of the game, the Clippers managed to cut down the lead with the help of a 17-point second half from J.J. Redick. It’s hard to believe, but the Clippers were still in the game despite Redick scoring his first bucket, a three-pointer, midway into the third quarter. In fact, Redick’s offensive run gave the Clippers their first lead since the first quarter. The Clippers were on a roll and didn’t stop. They scored 71 points in the second half, which was ignited by a 37-point third quarter.

Los Angeles never looked back after the third. Given the enthusiasm on commentary, one would have assumed that the Knicks were taking on the Sixers. But that’s OK given the circumstances. Simply put, this game was wonky for both teams. With the win, the Clippers may now be comfortable enough with letting Chris Paul rest yet another game, so that he can start the series on Friday in front of a home crowd instead of Wednesday back in Houston. Or they may start him to exacerbate the hole Houston has dug themselves into. The choice is theirs.