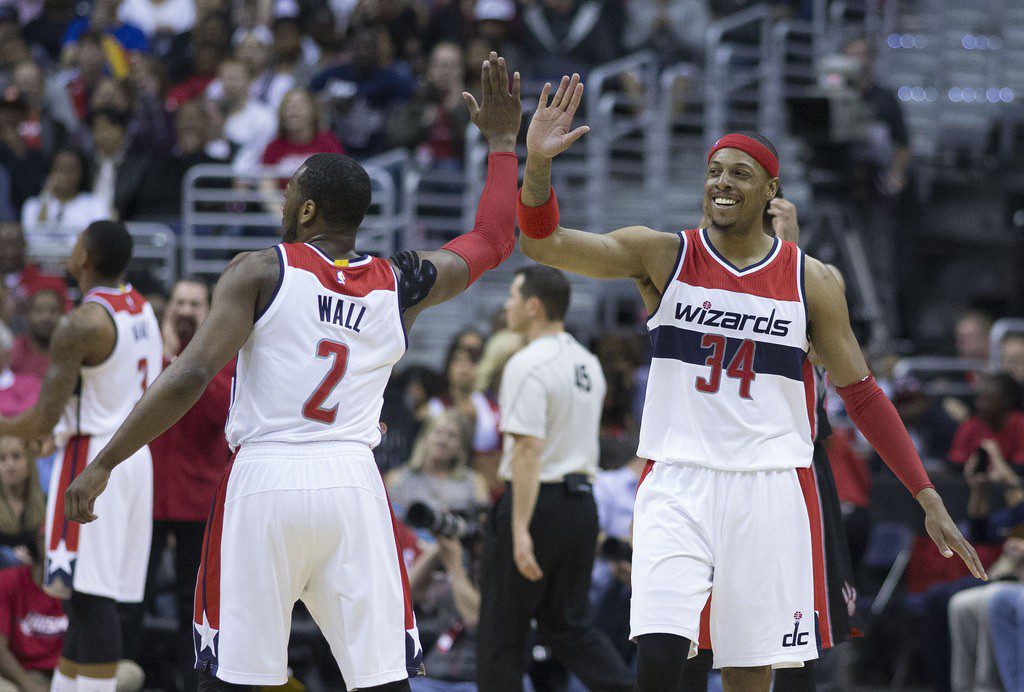 It’s Friday, and that means that the weekly NBA Playoffs Stock Report is in folks!

Up: Tim Duncan
Even at 39 years old, Duncan is still one of the 10-15 best players in the NBA, and that in and of itself is preposterous. Nobody has ever been as effective at this age and he’ll probably be saying the same thing next year if a 40-year-old Duncan is still playing. With all due respect to the Clippers and their fans, I was rooting for the Spurs in Round One because of this freaking alien, whose per 36 minutes numbers were better this year (in an admittedly small sample size) than they were in 1999, when he was 22 years old and winning his first Finals MVP. It took me longer than I’d like to admit, and I’m sure that is the case for most basketball fans, but I love Tim Duncan and I’m going to absolutely hate the day he decides to retire.

Up: Blake Griffin
I can’t say that this is the player we always expected or even wanted Blake Griffin to be because frankly, this is a much better version of it. He’s been the best player in the playoffs by a comfortable margin; skilled enough to essentially play back-up point guard with Chris Paul out, (if you don’t believe that, just re-watch the games to check for the times when a Clippers guard would grab a rebound, and immediately look for Blake to bring the ball up the floor) and great enough to outplay the extra-terrestrial being Tim Duncan in the first round, AND spark the Clippers in a Game 1 at Houston in Round Two without Paul.

As of May 7th, Griffin is the outright leader in total points, rebounds AND assists in the Playoffs. I’m not comfortable enough to pencil the Clippers into the next two rounds of the Playoffs, but if Griffin were to continue playing at this level and remain at the top of those columns, he’d be the first player ever to lead the postseason in all three categories. And yes, I checked back all the way to 1947.

Down: Kawhi Leonard
Kawhi’s stock is momentarily down, but I wouldn’t rush to sell it. Let’s not forget that he’s 23 years old and this was the first series where there was legitimate pressure on him to deliver big time offensively. I just don’t know if he has the right mindset yet. It won’t be long until we’ve forgotten about those three bad games he played to end the Clippers series.

Up: Drew Gooden
Forget about, “Keep gettin’ dem checks,” … Keep gettin’ dem minutes Drew Gooden! How nuts is it that the last time Drew Gooden played such a crucial role on a Playoff team, it was 2007 and the Cleveland Cavaliers made the NBA Finals? On a per 36 minute basis Gooden is better now than he was then. Move over Tim Duncan! We have a new go-to-guy in terms of career durability! I can’t decide whether it’s a bad thing that Washington’s playoff hopes partially rest on Gooden’s ability to stretch the floor and play 20 effective minutes a game, or if it’s a good thing because he’s actually done both this postseason.

Up: Steve Ballmer
This is me, in the future, watching my unborn son play basketball:

Up: Dwight Howard
On the sneak Dwight has been Houston’s best guy this postseason. Excluding Game 1 of the Dallas series, when he was still on that silly minutes restriction, he’s basically been a 20-15 guy and he looks to have 80 to 90 percent of the springiness, strength, defensive instincts, etc. that he had when he was at his apex in Orlando. I don’t like Dwight Howard, but I enjoy watching the version of Dwight Howard that makes me regret once saying that he’s nothing more than the rich man’s Dikembe Mutombo.

Down: Derrick Rose
The evidence continues to pile up showing that the former MVP is now a guy who just isn’t built to play on less than two days rest. Observe:

Every Eastern Conference Semi’s game from here on out will be every other day, and that has to scare the hell out of Bulls fans.

Down: Point Guard Health
The casualties: Chris Paul, Mike Conley, and John Wall (who might be out for the rest of the postseason) have all been forced to miss games. Patrick Beverley was shelved before the Playoffs. Jeff Teague rolled his ankle in Game 1 of the East Semi’s, Derrick Rose’s health is always a question mark, and Stephen Curry‘s ankles have a spotty history. Come on Sports Gods, cut these guys a break!

Up: Mike Conley
A virtuoso performance in Game 2, playing with a broken face, a sprained right foot and a bad stomach because of the anesthesia from the surgery on his goddamn face. Conley pestered Stephen Curry into a 7 for 19 shooting night on the evening he was awarded the MVP trophy, and he injected some life into an offense that was relatively lifeless without him in Game 1. Before Game 2 I would’ve guessed Conley could’ve swung one game in the series, probably one of the two in Memphis. Now, who knows? I’m not ready to say that Memphis has the edge in the series, but it feels way more even than I expected it would.

Up: LeBron James
Just when doubts were starting to creep in as to whether LeBron could dial it up and have one of those I’m The Best Player In The World, And We’re Not Losing This Game games, he had one in Game 2 right from the jump. Aggressive offensively from the get-go and much more active defensively, setting a tone early on for an inexperience Cavs team that this was a game they needed to get. LeBron’s in year 12. Let’s not take these kind of performances for granted.

Down: Joakim Noah
Another thing that should be scaring the hell out of Bulls fans: Joakim Noah hasn’t been right all season, and that proclamation isn’t only in relation to the fact that all of Noah’s numbers are down across the board this year. What’s more worrisome than that is that Noah hasn’t looked like the same guy all year; not as many hustle plays, not as much yelling, not nearly as much involvement offensively, not quite as quick/reliable defensively and he’s never closing games. Forgive the obvious statement, but this is problematic.

Up: DeMarre Carroll
File this one away into the Holy shit, really? category: DeMarre Carroll is the first Hawk player since Dominique Wilkins to score 20 points or more in five straight Playoff games. He’s also one of the leading candidates to get drastically overpaid this summer. Good for DeMarre, for both accomplishments.

Up: Chris Paul
Can we bury the Chris Paul is a choker narrative yet? People were quick to blame Paul last year after a disastrous end to Game 5 in the West Semi’s. Will they be equally quick to jump the other now that Paul delivered one of the guttiest postseason performances ever, and hit one of the ten most memorable game-winning/game-tying/game-clinching playoff shots of the 21st century in Game 7 against San Antonio? The complete list, in chronological order:

Down: Nene
In 44 minutes in the East Semi’s, Nene doesn’t have a made field goal. How, the hell, does that happen? There’s only one guy in DC having a worst postseason than Nene is …

Down: Randy Wittman
The Dry Erase Board strikes again! Just look at Randy’s face. It says, “Ah son of a bitch, I’m going to end up on a Vine again.”